Legends collide as Godzilla and Kong, the two most powerful forces of nature, clash on the big screen in a spectacular battle for the ages. As a squadron embarks on a perilous mission into fantastic uncharted terrain, unearthing clues to the Titans’ very origins and mankind’s survival, a conspiracy threatens to wipe the creatures, both good and bad, from the face of the earth forever. (Courtesy of Warner Bros. Pictures) 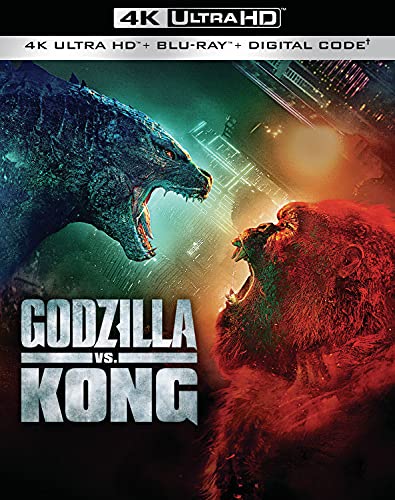 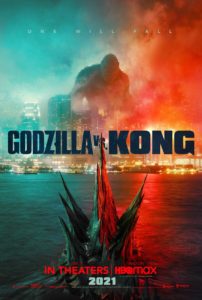 Five years have passed since Godzilla defeated King Ghidorah at the end of Godzilla: King of the Monsters. While Godzilla has essentially disappeared into the depths of the ocean, Kong has become the only known Titan still in existence. Kong still resides on Skull Island. However, instead of roaming the tropical jungle island, Kong is now contained in a giant dome manufactured by Monarch that replicates the island environment. The dome protects Kong from the climate, which has turned dangerously unstable around the island. It also protects Kong from detection by Godzilla, who Monarch believes would hunt down and kill Kong. The facility is headed by scientist Ilene Andrews (Rebecca Hall), who lives on the island with her adopted, deaf daughter Jia (Kaylee Hottle). Jia has a special bond with Kong and can communicate with the Titan via sign language, although she keeps it secret from everyone else, including Ilene.

At the same time, Godzilla emerges near Pensacola, Florida. He attacks and destroys an Apex Cybernetics facility near the seaside before returning to the ocean. The reasons for the attack are unknown. During the attack, Bernie Hayes (Brian Tyree Henry), an employee of Apex and a host of a Titan conspiracy theory podcast, extracts information suggesting something nefarious was going on at the Apex facility. Bernie discovers a device that resembles the ORCA, a communications device created by Dr. Emma Russell (Vera Farmiga) that can be used to control Titans.

After the attack, the head of Apex Cybernetics, Walter Simmons (Demián Bichir), approaches former Monarch scientist Nathan Lind (Alexander Skarsgård) and recruits Nathan for a mission. Nathan is a believer in the Hollow Earth, a theory that forwards the possibility that the Earth is hollow and contains an extraordinary amount of power. Nathan also believes that the Hollow Earth may be the home of the Titans. Walter proposes that Nathan use Kong to lead an Apex team to the Hollow Earth. Nathan is hesitant to join the mission since his brother tried to explore Hollow Earth but a strong anti-gravity field inside the tunnel killed him and his team. Walter reveals that Apex has developed specialized vehicles, called HEAVs, that can withstand the gravity field fluctuations. Nathan joins the team.

Kong bows to no one. Ilene Andrews

Nathan travels to Skull Island to convince Ilene to allow them to use Kong to guide them through the Hollow Earth. Nathan convinces Ilene by theorizing that there may be more of Kong’s species in the Hollow Earth. Nathan, Ilene, Jia, and an Apex team board a modified barge with Kong chained and lightly sedated. They are joined by Walter’s daughter Maya (Eiza González) who oversees the transport on Walter’s behalf. During the journey, Kong becomes agitated, and Jai goes out to calm him. She uses sign language to communicate with Kong, and the giant ape signs back, revealing his ability to communicate with humans.

At the same time, high school student Madison Russell (Millie Bobby Brown), daughter of Dr. Emma Russell and Dr. Mark Russell (Kyle Chandler), Monarch’s deputy director of special projects, begins to investigate the cause of Godzilla’s attack on Apex. She enlists her friend Josh (Julian Dennison) to help her. They track down Bernie and convince him to join their quest. They break into the ruins of the Pensacola Apex building and find that it has a mysterious sublevel.

They are inadvertently locked and transported in a container carrying Skullcrawler eggs in a high velocity, underground tunnel to Hong Kong. Once there, they inadvertently stumble upon a test of Apex’s Mechagodzilla, a mechanical version of Godzilla. Walter Simmons has been secretly developing the weapon to eliminate the threat of Titan attacks. The Mechagodzilla is telepathically controlled by Ren Serizawa (Shun Oguri), the son of the late Ishirō Serizawa (Ken Watanabe). Ren uses the neural networks from the severed head of Ghidorah that Monarch retrieved at the end of Godzilla: King of the Monsters. Walter does not have a sufficient power source to power Mechagodzilla continuously and that is why he has dispatched Nathan to lead the Apex team to Hollow Earth to find one.

Meanwhile, Godzilla locates and attacks the convoy transporting Kong to Antarctica. Nathan frees Kong from his bonds so that he can defend himself during the attack. Godzilla destroys most of the convoy and nearly drowns Kong in the ocean. Kong barely escapes the attack and climbs up on the deck of the transport ship before passing out. The humans shut down their ships’ power, so it does not indicate that they are challenging Godzilla. Godzilla ceases his attack, but Nathan and the Apex team are forced to transport Kong a different way. They airlift the unconscious Titan to Antarctica using helicopters. Once there, Jai convinces Kong to enter the Hollow Earth entry point and the Apex team follows him in the HEAVs.

Once inside Hollow Earth, the team discovers an ecosystem that is remarkably similar to Skull Island. They discover a temple that appears to be Kong’s species’ ancestral throne room that depicts an ancient war with Godzilla’s kind. Kong discovers a glowing axe that appears to be made from the dorsal spines of another creature similar to Godzilla. The team finds the mysterious power source, which Kong uses to recharge the axe. The Apex team analyzes the power source and sends the electronic signature of the power back to Walter on the surface. At the same time, Godzilla arrives in Hong Kong and begins attacking the city. When Kong recharges the axe in the Earth’s core, Godzilla senses it and begins using his atomic breath to burn a hole through the surface all the way to the Hollow Earth. Godzilla’s attack causes giant bat like creatures to attack Kong and the human Apex team. Kong climbs back to the surface of the Earth with the axe, while the humans are all killed by the bat like creatures except Nathan, Jai, and Ilene who follow Kong to the surface in their HEAV.

Once on the surface, Kong begins attacking Godzilla, using the axe as a weapon. The axe is impervious to Godzilla’s atomic breath, and Kong quickly injures Godzilla. However, the giant lizard gets back up and attacks Kong again. This time, Godzilla severely injures Kong and claims victory. While Kong lies dying, Godzilla begins to return to the ocean. However, Walter uses the energy scan to create a power source sufficient to operate Mechagodzilla. The giant robot appears to become self-aware and kills Ren and Walter before climbing to the surface to take on Godzilla. Bernie, Madison, and Josh, who are still in the base, look for a way to power down Mechagodzilla.

Mechagodzilla quickly gets the upper hand on Godzilla and appears to be near killing the Titan. Nathan uses the power from the HEAV to restart Kong’s heart, and Jai tells her large friend to help Godzilla. Kong joins the fight, and the tag team pair get the advantage over Mechagodzilla. Back in the Apex base, Josh figures out that he can short circuit Mechagodzilla by pouring Bernie’s whiskey flask onto the control computers. The act causes most of Mechagodzilla’s offensive weapons to go offline. Kong makes short work of Mechagodzilla and tears the robot to pieces. During the battle, Godzilla recharges Kong’s axe so that he can use it to destroy Mechagodzilla.

After the battle, Godzilla once again returns to the ocean. Madison reunites with her father. Kong is taken back to the Hollow Earth where Nathan, Ilene, and Jai continue to study him and their newly discovered world.