Chorus girls Polly, Carol and Trixie are excited to learn that Broadway producer Barney Hopkins is putting on a new show. While he promises the girls parts in the new show (and even hires their composer / neighbor Brad Roberts), he doesn’t have the money to bankroll it. Fortunately, Brad is loaded. He says he will front the money as long as he’s not performer. On opening night, the lead can’t go on which forces Brad to take the stage. This causes his snooty family to find out, and order him to quit. He refuses. They tell him to end his relationship with Polly or be cut off from the family money. However, when Brad’s snobby brother mistakes Carol for Polly, the girls decide to have a bit of fun to teach him a lesson. 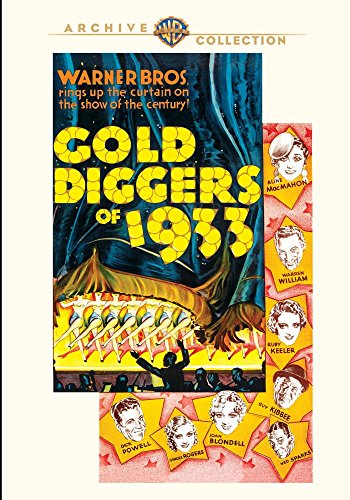 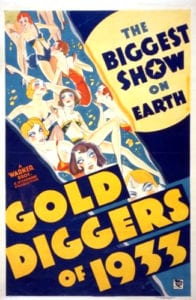 Gold Diggers of 1933 begins in New York where three showgirls, Polly, Carol, and Trixie, live in a rundown apartment. It’s the height of the Great Depression, and the girls are desperate for money. The stage show they worked for—their only source of income—was shut down for past due bills.

Their producer, Barney Hopkins has another show in mind which will bring in the money, but he can’t find anyone to fund the production. As he laments with the girls in their apartment, Barney hears Polly’s boyfriend, Brad, playing the piano across the way.

They invite Brad over where he performs for Barney. Brad is a songwriter with a lot of ideas, but no show to put them in. Barney hires Brad for his show, but he still lacks the funds. Luckily, Brad has $15,000 to give Barney, and the show is a go.

On opening night, the male lead can’t perform due to his lumbago acting up, so Brad reluctantly takes over the role. He’s reluctant because his wealthy family has forbidden him to have anything to do with the theater as it’s beneath the family, and he will be in trouble if they find out.

The show is a success, but Brad’s family does hear about it. They send his brother, J. Lawrence Bradford, and their family lawyer, Fanuel Peabody to protect him from those gold-digging hussies!

Once there, Lawrence believes Carol is Polly, and he offers to pay her off to ditch Brad. He and Fanny believe them to be cheap gold diggers. Lawrence’s approach annoys Carol and her roomie, Trixie. So, they decide to teach the men a lesson about judging women they don’t even know by pretending to be actual gold diggers.

In the process of their lesson, Carol and Lawrence fall in love, while Trixie tricks Fanny into believing she loves him for him. The film ends with Polly, Carol, and Trixie married (or in Carol’s case engaged) to one of the wealthy men, and they live happily ever after.