Max, Lucas, and Thor are three 6th grade boys who are looking to become popular at school. Max wants to kiss the girl of his dreams, Brixlee. Thor wants to shed his reputation from elementary school, and Lucas just wants to hang out with his friends. In their quest to become popular, the boys ditch school and embark on an epic journey while carrying accidentally stolen drugs, being hunted by teenage girls, and trying to make their way home in time for a long-awaited party. 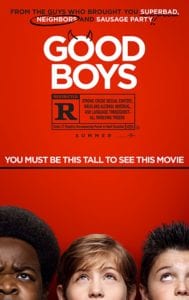 The “Bean Bag Boys” are three friends who are entering the sixth grade together. Max (Jacob Trembly), the unofficial leader of the group, has a crush on a fellow classmate Brixlee (Millie Davis). Max desperately wants to kiss Brixlee because he knows that he is going to marry her someday. He even made a necklace for her. Lucas (Keith L. Williams), the honest to a fault kid, has just learned that his parents (Lil Rey Howery and Retta) are going to get divorced. Although his parents desperately try to put a positive spin on the situation, Lucas is understandably worried. Thor, the talented one, is trying to break away from his reputation from elementary school as “Sippy Cup”. He gives up his pursuit and love for singing in an attempt to become more popular.

One day, Max is invited to a party at Soren’s (Izaac Wang) house. Soren is one of the more popular kids at a school. Soren tells Max that not only will Brixlee be in attendance, but that it will be a kissing party. Soren does not initially invite Lucas and Thor, but when Max inquires about bringing his friends, Soren reluctantly agrees that they can come as well. Now the boys have a dilemma since they don’t know how to kiss a girl. They decide to spy on one of neighbors, Hannah (Molly Gordon), since she is a “nymphomaniac”. When they can’t get a good look at what she is doing through the fence, they use Max’s dad’s (Will Forte) drone to spy on her from the air.

Hannah and her drug dealing boyfriend Benji (Josh Caras) break up over Hannah spending too much time with her best friend Lilly (Midori Francis). Hannah is indifferent about the break up since Benji had already provided her with the drug Molly. Hannah and Lilly plan on taking the drug before a concert the next night. They notice the drone flying over head and realize that someone is spying on them. When the boys lose control of the drone, the girls capture it. Max and his friends go over to Hannah’s house under the pretense that they were watching turtles, but the girls see through it and refuse to give the drone back to teach them a lesson. Max is fearful that his father will return and find the drone missing and ground him. If he is grounded, he will not get to go to the party and kiss Brixlee.

However, Thor stole Hannah’s purse while they were in her house and has her wallet, her phone, and most importantly, her Molly. The girls call Hannah’s phone from Lilly’s phone and agree to exchange the drone for the purse and its contents. The boys insist on a public place and chose a nearby playground. Once at the playground, the boys learn that the purse contains drugs and Lucas gets nervous. He won’t turn over the drugs because he doesn’t want to be a drug dealer. Max takes control of the drone via his phone and flies it away from the girls and right into a bus, destroying it. With the drone destroyed, the boys have to find another way to replace it.

Max comes up with a plan to sell a treasured gaming card that the boys acquired previously. They find a seller, Claude (Stephen Merchant), on the internet who comes to Thor’s house to buy the card. However, Lucas decides he does not wish to sell the card, so the boys sell Thor’s parents sex doll to Claude instead. Now with the money, the boys skip school and head towards the mall on their bikes. Along the way, the encounter Hannah and Lilly again who track the boys using Hannah’s phone. The boys eventually lose the girls, but encounter a police officer (Sam Richardson) at a convenience store and turn the Molly over to him.

The boys make it to the mall but are informed the last drone was purchased by Hannah. The boys call Lilly’s phone, and the girls offer to sell the new drone for the Molly. The boys tell the college girls that they don’t have the drugs any longer, and they all come up with a new plan to purchase more Molly from Benji.

The boys go to Benji’s fraternity house. Benji initially refuses to sell to the boys, but then agrees to sell to them if they tell him who sent them. When they reveal that Hannah sent them, Benji refuses to give them the drugs. Max pulls out Thor’s paint ball gun and begins shooting up the frat boys and the house, allowing the boys to escape with the Molly. They make the exchange with Hannah and Lilly for the drone.

Once they have the drone, they begin walking home. Max’s dad calls his son to tell him that he will be home early, forcing Max to try to fly the drone home prior to his father returning home. The drone severely damages the living room, and Max is grounded. Max and his friends get into a fight and agree to go their separate ways. Nevertheless, Max covers for his friends and does not tell his parents that his friends were involved.

Lucas confesses everything to his parents, but they don’t believe him. Lucas, still reeling from his parents splitting up, doesn’t want to lose his friends as well. He goes to Max’s house the night of the kissing party and convinces Max to sneak out to go to the party. Unbeknownst to Max, Lucas has also convinced Thor to come to the party as well, although they do not go in as friends. At the party, the kids play spin the bottle. Brixlee spins the bottle and it points to Thor instead of Max. Thor backs out of the game rather than betray Max. Thor ends up playing a virtual reality game with Lucas while Max finally kisses Brixlee. Soren’s sister turns out to be Lilly who returns with Hannah from the concert high on the Molly. They encourage Thor to continue his passion for singing.

The film ends with a montage of the boys during their sixth grade year. Thor lands the role of Stacee Jaxx in the school’s production of Rock of Ages. Lucas joins the anti-bullying group at the school. Max enters into a relationship with Brixlee, then her friend Taylor (Macie Juiles), and finally with a girl named Scout (Zoriah Wong). The boys continue to be friends, although sometimes distant from each other. They promise to remain in each other’s lives and not miss the big events.