In Good Morning, Vietnam, a disc jockey from Crete arrives to Vietnam to bring humor to Armed Forces Radio. His style turns the radio station on its ear to become wildly popular with the troops. However, his show rankles some of his team who think he isn’t showing respect for the uniform. When not on air, he begins to have brushes with the real war that the government never allows be presented on the radio. 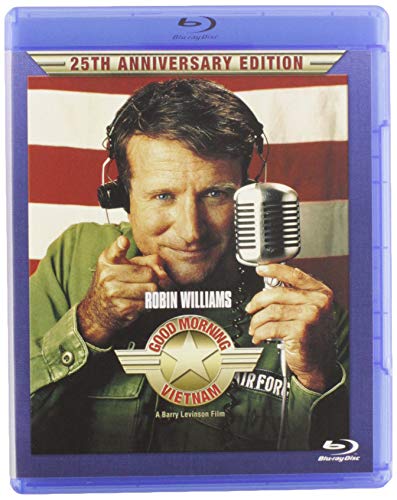 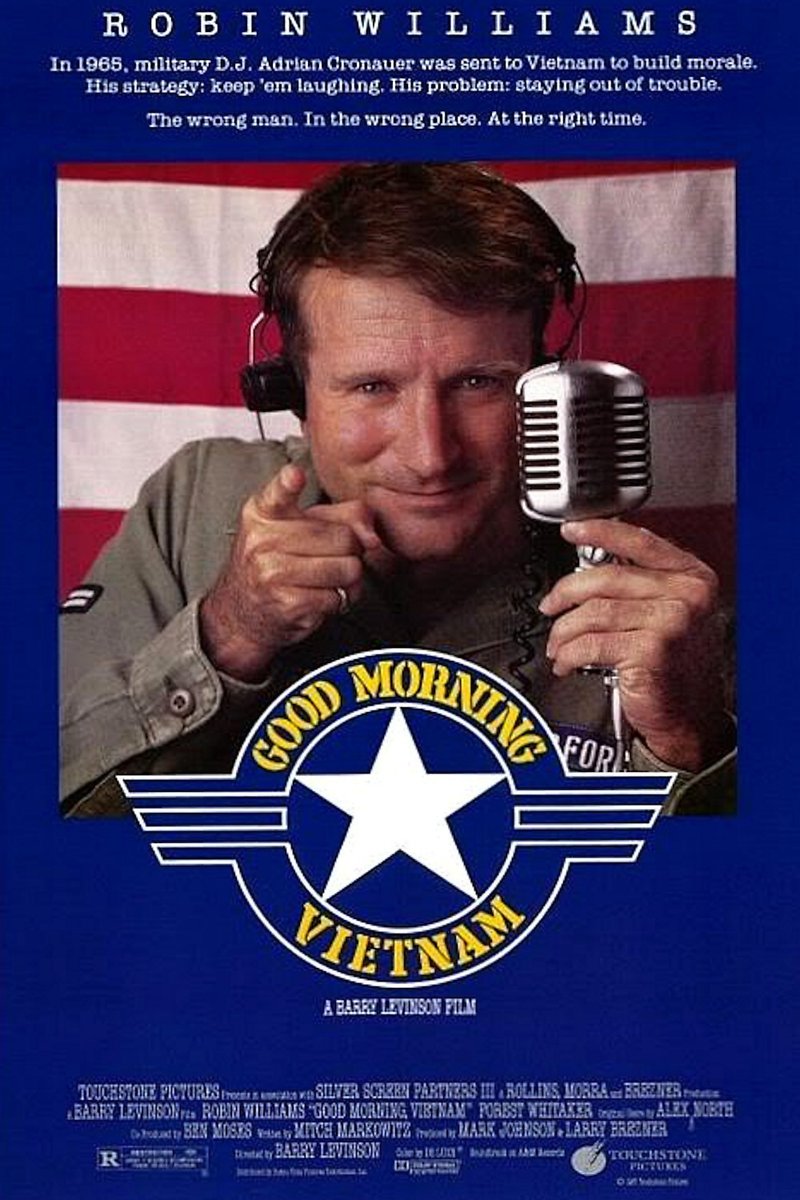 Barry Levinson’s Good Morning, Vietnam begins in 1965, after a vacation in Greece, Brigadier General Taylor heard Airman Second Class Adrian Cronauer on the Armed Forces Radio Network Europe and did him a real solid by forcing a transfer from Radio Crete to beautiful Sia Gon right at the peak of the Vietnam war. This transfer to entertain the troops in Asia would allow Cronauer to introduce an irreverent style that must have been loved in Europe but would piss off the brass in Viet Nam.

Our hero Adrian arrives in Sia Gon to be greeted by Private First Class Edward Montesquieu Garlick (Who, incidentally, has a striking resemblance to Idi Amin and that Hard Ass cop in the Shield). Cronauer opens his first shift with a monologue which shocks and thrills everyone. Everyone that is accept the station manager and program director who are offended by either Adrian’s irreverence or the fact that he is actually entertaining. Program Director, Second Lt. Steven Hauk nearly passes out when Cronauer spins Martha and the Vandals instead of Lawrence Welk’s orchestra.

Unfortunately for Adrian, Hauks anger does not compare with that of Sergeant Major Phillip Dickerson who declares all-out war on Cronauer. Hauk, at the direction of Dickerson adheres to strict Army guidelines in terms of humor and music programming, placing Adrian in a position of either complying with orders, or entertaining the troops. Adrian chooses the ladder and we have a movie.

Despite Dickerson abuse, Adrian keeps his show going. Brigadier General Taylor and the other DJs who love Adrian and his brand of comedy come to his aid and assist Adrian in getting Hauk and Dickerson off his back. While Cronauer gets some leeway from the General, it continues to anger Adrian that any news reported must be cleared by the government censors. What survives the sensors gives Adrian little more to report than the weather, assuming it is not too hot.

Between shifts, Cronauer spots the beautiful Trinh, a Vietnamese girl who is apparently a lot less hairy than the girls in Crete. Adrian follows Trinh to her English class, and with no other moves to make, bribes the teacher to let him take over the job. Cronauer starts instructing the students in the use of American slang and rock and roll. Once class is dismissed, he tries to talk to Trinh but is stopped by her brother Tuan.

In a move that has never worked, ever, Cronauer befriends Tuan to get to Trinh. To encourage their blossoming friendship, and possibly look cool to Trihn Adrian takes Tuan to Jimmy Wah’s, the local GI bar, to have drinks with Garlick and the station staff.

At Jimmy Wah’s, two soldiers are angered at Tuan’s, a Vietnamese native, presence in the bar. Imagine that a Vietnamese native going in to a bar in Sia Gon. Is nothing sacred? As Adrian is looking to befriend Tuan in order to impress Trinh, Cronauer throws a punch to make it clear that Tuan is cool. That punch turned in to an all-out brawl, which surprisingly enough would piss off the brass.

Dickerson reprimands Cronauer for this incident, but his broadcasts continue as before, making the troops happy and angering Dickerson and Hauk.

While kicking back with a cold one at Jimmy Wah’s Adrian is spotted by Tuan, who pulls him out of the bar to go meet Trinh. Fortunately for Adrian, this was mere moments before the building explodes, killing two soldiers. It is determined that the explosion was the work of terrorists, who apparently they were not fans of the no Vietnamese in the Vietnamese bar policy.

After the explosion, the news is censored, but Cronauer locks himself in the studio and tells everyone about the explosion that didn’t happen. Dickerson cuts him before Cronauer can complete his broadcast. After this violation of military policy Adrian is suspended. Hauk, who enjoys comedy and joke writing as a hobby, takes over his shows. After a painful attempt at being funny and rousing Polka music the station is flooded with letters requesting Adrian return to the air.

During his suspension, Cronauer spends his time chasing Trinh. Other than a group date that included Trinh’s entire family, Adrian did not get anywhere with her. Pho, the secret is Pho. If only Adrian knew.

General Taylor intervenes and orders Hauk to end the suspension and get Cronauer back on the air. Frustrated by the censors and the senseless war, Cronauer refuses to open the mic. Garlick, the ever diligent side kick, is trying to get Adrian back to work when their vehicle becomes stopped in a congested street. Waiting for the jack knifed water buffalo to be cleared; they run in to soldiers from the 1st Infantry Division.

After being introduced, against his wishes, by Garlick, Adrian does an impromptu “broadcast” for them before they go off to Nha Trang to fight. Meeting these young boys and with the knowledge that many will not return home, Adrian is reminded why he does what he does and agrees to go back to work.

Dickerson, a down right meanny, decides that if he can’t get Adrian off the air, he will just have him killed. Dickerson sends Cronauer and Garlick to interview soldiers in the field, knowing that the only road into the area, a highway to An Loc, is controlled by the Viet Cong. Their Jeep hits a land mine and they are forced to try to make their way home through the jungle.

When Adrian does not make it to English class, Tuan learns that Adrian and Garlick are stranded behind enemy lines. In an effort to save Cronauer, Tuan steals a van and charges to their rescue. Tuan finds the pair, and after the trio is found by the marines, they are all returned to the safety of Sia Gon.

After this incident, Dickerson is almost gitty, as he now has what he needs to get rid of Adrian, declaring Cronauer is now off the air for good. Dickerson learns that Tuan is VC and was responsible for the bombing of Jimmy Wah’s. Dickerson has arranged for an honorable discharge, provided Cronauer leaves “quietly.” General Taylor arrives and informs Cronauer that, regrettably, he cannot help him since his friendship with Tuan would place the reputation of the US Army at risk.

After Taylor leaves, Cronauer asks Dickerson why he engineered his dismissal. Dickerson openly admits his personal dislike for Cronauer, his sense of humor, and his style of broadcasting. After Cronauer leaves, Taylor (who apparently overheard the confrontation), casually informs an astonished Dickerson that he is being transferred to Guam, presumably as a punishment for his vendetta against Cronauer.

Cronauer, shocked and hurt that Tuan is VC goes after him to not only confront him, but to tell him his cover is blown and the South Vietnamese army is looking for him and if they find him he will be executed. In a confrontation in a small Vietnamese village, Cronauer blasts Tuan for his actions against the American forces. Emerging from the shadows, Tuan explains that the United States military has decimated his family and that the Americans are the real bad guys.

The next day, on his way to the airport with Garlick, and under MP escort, Cronauer sets up a quick softball game with the students from his English class where he gets to say goodbye to Trinh. As he boards the plane, he gives Garlick a taped farewell message; Garlick – taking Cronauer’s place as DJ – plays the tape on the air the next morning. It begins with a yell of “Gooooooooooooooooodbye, Vietnam!” and runs through a few of Cronauer’s impressions before ending with his wish that everyone will get home safely.