Goodfellas is based on a true story that explores the lowly, blue-collar side of New York’s Italian mafia in this crime biopic of wiseguy Henry Hill. His life takes him from a young petty criminal, to big-time thief, to middle-aged cocaine addict and dealer. As we witness the rise and fall of Hill and his two counterparts—the slick jack-of-all-trades criminal Jimmy Conway and the brutish, intimidating Tommy DeVito—we learn the rules and traditions of organized crime. 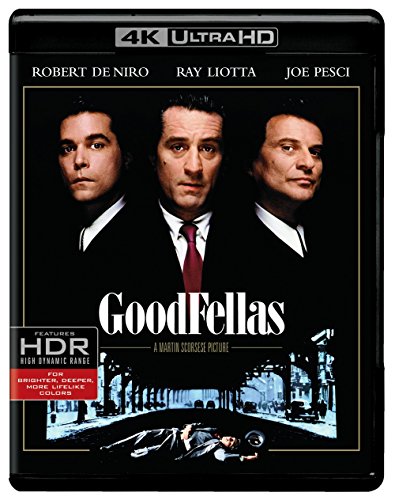 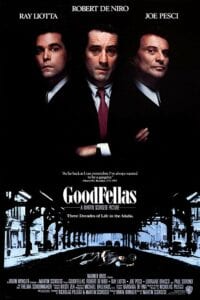 Goodfellas follows the auto-biographical story of Henry Hill, a young boy who grows up in a predominantly Italian-American neighborhood of Brooklyn. The film begins with the adult version of Hill recalling, “As far back as I can remember, I always wanted to be a gangster.”

Hill, played by Ray Liotta, talks about how as a child he idolized the Lucchese crime family, and ultimately, how he quit school to go work for them. His childhood is spent running errands for wise guys around town, and causing general mayhem at the request of his adopted crime family members.

Eventually, his dedication is noticed and appreciated, and Henry begins to make a decent living for himself. Ultimately, Henry gets arrested while selling stolen merchandise, but he doesn’t give the police any information on where he got the merchandise. Expecting to get into trouble, Henry is surprised when one of his mentors, Jimmy “The Gent” Conway, praises him and tells him that he did great. Jimmy tells him he learned two important lessons, “Never rat on your friends, and always keep your mouth shut.”

The film then jumps forward in time to an adult Henry working for the local mob capo, “Paulie” Cicero. Henry’s crew is made up of Jimmy and Tommy DeVito, a hot headed Italian who is quick to resort to violence, played to perfection by Joe Pesci. Jimmy, Tommy, and Henry work for Paulie primarily hijacking trucks. Jimmy’s crew is even responsible for the famous Air France Robbery that was committed in 1967.

When the wise guys aren’t “working”, they spend many of their nights at the Copacabana. Henry is set up on a blind double date with Karen, a young Jewish woman played by the Academy Award nominated Lorraine Bracco. Neither Karen nor Henry initially have any interest in each other, but Karen is seduced by the glamorous lifestyle that Henry lives, and Henry is attracted to a woman who doesn’t take any of his shit. Before too long, Henry and Karen are married and beginning a family.

The film then jumps to 1970, where Tommy gets into an argument with Billy Batts, a made man and a member of the Gambino crime family. The argument arises out of Batts insulting Tommy about being a shoeshine boy in his younger days, something that Tommy wishes to leave in the past. With the assistance of Jimmy, Tommy brutally beats Batts to the point that they believe he is dead. Realizing their murder of a made man would mean retribution from the Gambino family, Jimmy and Tommy, along with Henry, conspire to cover up the murder.

The trio throw Batts into the trunk of Henry’s car with the intention of burying him upstate. However, Batts is not dead, and they have to stop along the way to allow Tommy to stab the injured Batts several times to finish the dirty deed. Six months later, Jimmy learns the burial site will be developed, forcing them to exhume the decomposing corpse and move it.

Next we see Henry with his mistress, Janice Rossi, at their apartment. You see, Saturday night was for wives, but Friday night at the Copa was always for the girlfriends. However, when Henry begins spending more than Friday nights with Janice, Karen tries to confront the mistress at the apartment building and then even threatens Henry at gunpoint at home. After escaping a very pissed off Karen, Henry goes to live in the apartment with Janice.

However, Paulie soon intervenes and directs Henry to return to Karen after completing a job for him. Henry is sent to collect from an indebted gambler in Florida along with Jimmy. They are successful at their task, but they are soon arrested after being turned in by the gambler’s sister, a typist for the FBI. Jimmy and Henry receive 10-year prison sentences each.

While in prison, Henry resorts to selling drugs to support his family on the outside due to the fact that Paulie and the family will not do anything to help him and Karen while he is in the clink. After his early release in 1978, Henry further establishes himself in the drug trade, ignoring Paulie’s warnings, and convincing Tommy and Jimmy to join him.

While expanding their drug enterprise, the crew commits the Lufthansa heist at John F. Kennedy International Airport, stealing $6 million. However, Jimmy begins killing many of the participants to the heist after they ignore his command to not buy expensive luxuries with their share for fear of attracting police attention. Soon after, Tommy is given good news that he will made. However, it turns out to be a rouse, and Tommy is killed in retribution for Batts’ murder years before.

The film skips to May 1980. Henry, now a drug dealer and cocaine addict, is trying to organize a drug deal with his associates in Pittsburgh. In a sequence shot in a frantic style that matches Henry’s mindset, Henry rushes all over New York trying to work out the drug deal, sell some guns, and cook dinner for his brother.

At the end of the day, Henry is arrested by narcotics agents and jailed. On his release, Karen informs Henry that she flushed $60,000 worth of cocaine down the toilet to prevent FBI agents from finding it during their raid.

The destruction of the drugs leaves the family virtually penniless with very few places to turn. Henry turns to Paulie, knowing that the crime boss may just have him whacked rather than help him. Feeling betrayed by Henry’s dealing drugs, Paulie gives him $3,200 and ends his association with him.

Facing federal charges, Henry and Karen decide to enroll in the Witness Protection Program after realizing Jimmy intends to have them killed. Forced out of his gangster life, he now has to face living in the real world. He narrates: “I’m an average nobody. I get to live the rest of my life like a schnook”. Because for a Goodfella, there can be no worse fate.