When collecting scrap in R.L. Stine’s abandoned house, teenage friends Sunny and Sam find a book which they open, releasing Slappy the evil dummy from the book. The two have to team up with Sunny’s older teenage sister Sarah on Halloween to re-include Slappy and all the other monsters he has freed in their books. (Courtesy of Sony Pictures Animation) 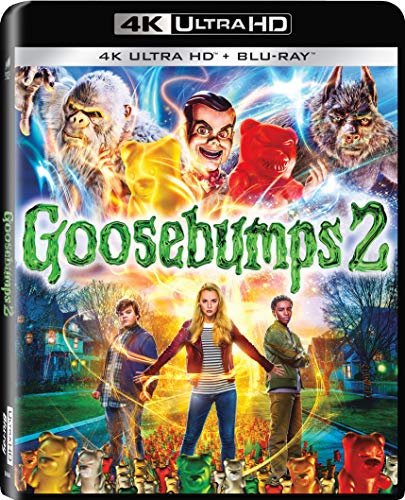 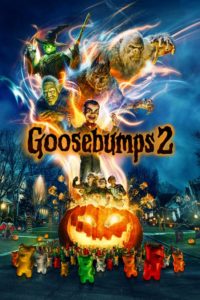 Three years have passed since the incident in Madison, Delaware depicted in the first Goosebumps film. Teenager Sarah Quinn (Madison Iseman) is attempting to get into Columbia University and must write an essay about fear. She lives with her mother Kathy (Wendi-McLendon-Covey) and her younger brother Sonny (Jeremy Ray Taylor) in a house in Wardenclyffe, New York. Sonny’s bestfriend Sam Carter’s (Caleel Harris) father is going out of town for work so Kathy agrees to watch Sam for a few days which interferes with Sarah writing her essay. Sonny and Sam are starting a garbage clean up business and have been hired to clean up an abandoned house. Inside the house, they find a locked manuscript which they open. Slappy the Dummy (Mark Wingert) mysteriously appears after they open the book. The boys read some magic words that they find in Slappy’s pocket and mistakenly bring the puppet to life. A short time later, the manuscript is stolen by the town bully, Tommy Madigan (Peyton Wich).

Back at his home, Sonny works on his science project which is a miniature version of Nikola Tesla’s Wardenclyffe Tower. Slappy suddenly comes alive in front of Sonny and Sam. He wins over the trust of the boys by using his magic to complete their chores and homework. At the same time, Sarah goes to a party with her boyfriend Tyler Mitchell (Bryce Cass). However, she leaves suddenly when she sees Tyler kissing another girl at the party. Slappy overhears Sarah complaining about Tyler later that night and sabotages Sonny’s science project.

The next day is Halloween. Sonny accidentally damages the science lab at his school with his sabotaged science project. At the same time, Slappy uses his powers to attack Tyler. Sarah questions Sonny and Sam about Slappy, and the group realizes that Slappy is behind all the chaos in their lives. The trio captures Slappy and attempts to dispose of him in a nearby lake, but the dummy escapes. The kids begin to investigate Slappy and find an article online about the events of the first film in Madison, Delaware. They attempt to contact R. L. Stine (Jack Black) after they realize the book the boys found in the abandoned house was an unpublished Goosebumps manuscript called Haunted Halloween. Stine does not answer the call, but after he hears the message, he gets into his car and begins driving to Wardenclyffe.

Oh, my writing was so cliché back then. R.L. Stine (Jack Black)

Meanwhile, Slappy goes into the town and visits a store. He uses his magic to bring the Goosebumps costumes and Halloween decorations to life. Slappy also uses a Haunted Mask to transform the store’s manager, Walter (Chris Parnell), into a hunchbacked ogre. Next, Slappy travels to the Wardenclyffe Tower. Once there, he uses the Tower to amplify his magic to bring more things to life. At the same time, Sarah, Sonny, and Sam go to Tommy’s house to retrieve the manuscript. They are attacked by the Halloween monsters and discover that the book can trap the monsters inside its pages. However, the book and Kathy are abducted by the monsters who take them to Slappy.

The kids come up with a plan to save their mother and the town. Mr. Chu (Ken Jeong), the Quinn’s neighbor, helps them craft monster disguises so that they can move freely around the town. The trio head for the Tower just as Stine finally arrives in Wardenclyffe. Once at the Tower, the kids encounter Slappy and his loyal companion Walter. Slappy reveals that he has turned Kathy into a living dummy. The kids divide up to save the town. Sonny and Sam overload the reactor while Sarah fights Slappy one on one. Sarah gets the better of the dummy by kicking Slappy into the electrified coil on top of the tower. The electricity launches Slappy into the sky. Sarah then retrieves the manuscript and opens it. The book’s power combined with the reactor’s energy sucks all the monsters in the town back into the Haunted Halloween manuscript. The book also reverts Kathy and Walter back to their original states. Stine arrives just as everything is settling down. He congratulates the kids for defeating his creations. Stine also offers advice to Sarah on how to write her essay.

Weeks later, Kathy and Walter are in a relationship together. Sonny has won the science fair with his latest project, and Sarah receives an email informing her of her admittance to Columbia University. Meanwhile, Stine returns to his cabin in the woods. Slappy mysteriously appears and reveals that he has somehow survived. The evil dummy tells his creator that he has written a book of his own where Stine is the main character. Slappy opens the manuscript and the book sucks Stine inside.