At Rydell High School, Danny Zuko, leads a gang of greasers called the T-Birds. He winds up falling for a goody-two-shoes girl named Sandy Olsson over the summer, but she was leaving back to Australia at the end of it. While the two thought they would never see each other again, her family’s plans change. Sandy enrolls at Rydell High on the first day of classes. The school’s girl group, the Pink Ladies, immediately accepted Sandy into their circle, and re-introduce her to Danny shortly thereafter. However, she’s disappointed to find Danny has changed in front of his friends. However, he works to become the loving Danny Zuko that Sandy met during the summer in the hopes of winning her back permanently. 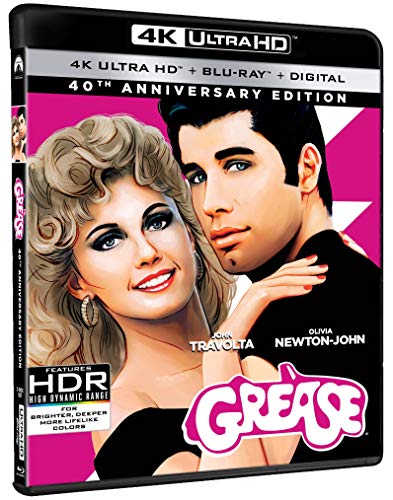 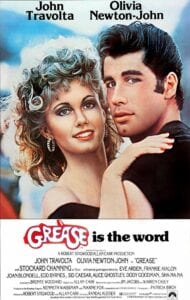 The post World War Two era saw the birth of a new teen identity. These Bobby Soxers and Greasers had their own fashion, slang, and music. The movie Grease (which is based upon the Broadway hit musical) celebrates this teenage culture.

Greaser Danny Zuko (John Travolta) falls in love with wholesome and pure Sandy Olson (Olivia Newton-John) at the Beach over the summer. They believe they are saying goodbye as Sandy returns to her native Australia when the summer is over.

Fast forward to the first day of school at Rydell High School. Sandy is trying to make friends with the Pink Ladies, a rough group of girls. She tells them about her “summer nights”. Danny tells a racier version to his Greaser friends, who are a gang known as The T-Birds. The Pink Ladies giggle when they learn that Sandy’s Prince Charming is their friend, Danny Zuko.

The Danny they know is not innocent. He has dated most of the girls at the school, including Rizzo (Stockard Channing). A jaded Rizzo is anxious to show Sandy the real Danny and arranges for them to reunite at a High School Pep Rally in front of the T-Birds. Rizzo knew that Danny would “play it cool” in front of his friends. Sandy is devastated. What happened to the Danny Zuko that she met at the beach? Danny shows a second of remorse and then continues on with the guys.

Frenchy (Didi Conn) tries to cheer up Sandy and invites her to a slumber party. Frenchy announces that she is dropping out of Rydell to attend beauty school. She offers to pierce the girl’s ears, which does not end well for Sandy. Rizzo finds Sandy’s innocence annoying and makes fun of her. Marty (Dinah Manoff) writes a letter to a Marine pen pal. A hurt Sandy ends up in the back yard swearing that she is “hopelessly devoted” to Danny’s face in a kiddie pool.

Rizzo and Kenickie (Jeff Conway) are now an item in the back seat of Kenickie’s car. A member of a rival gang interrupts them and damages Kenickie’s car. The boys work together to fix the car. They dream of what “Greased Lightening” will look like and do for them when she is all fixed up.

Danny sees that Sandy is dating a jock and decides to impress her. He attempts unsuccessfully to join several sports teams before settling on track. Sandy sees him fall during a practice and runs to see if he is okay.

They get back together but find it awkward to be around the T-Birds and Pink Ladies. At a malt shop, Danny and Sandy leave early as couples begin to pair up for the big dance, which will be televised. Rizzo and Kenickie get in a huge fight, ending with spilled milkshake on Kinickie and Frenchie. Frenchie removes the scarf from her head to reveal that beauty school is not going well. In fact, she is now a beauty school drop out with Frankie Avalon as her teen angel.

To get back at Kenickie, Rizzo invites the rival gang leader that damaged his car to the big dance. Kenickie responds by inviting the gang leader’s girlfriend, Cha Cha DeGragorio, to the dance. Cha Cha is an amazing dancer and happens to also have dated Danny.

Marty goes to the dance alone and flirts with the American Bandstand host, Vince Fontaine. The night seems to be going well for Danny and Sandy until the Dance off. They are one of the last couples remaining when Cha Cha cuts in and wins the contest with Danny. Sandy storms out of the dance and Danny is too busy dancing to care. While Danny and Cha Cha dance the spotlight dance, several of the guys moon the camera.

After making up again, Danny gives Sandy his class ring and tries to put some moves on her. Sandy throws the ring at him and leaves him stranded, alone at the drive in movie. (The song in the play is much better than the movie song.) Although I did like the dancing food.)

Also at the drive-in, the word spreads that Rizzo thinks she has a bun in the oven. When Kenickie hears of it, he offers to help. Rizzo crushes him by telling him it isn’t his. Kenickie and his rival have arranged a race. Kenickie gets a head injury and Danny ends up driving for him and winning. Sandy watches from afar and asks Frenchy for help.

It is now already the last day of school and Rydell has a big carnival. Danny shows up in his letterman’s sweater, ready to impress Sandy. Maybe Frenchy should have stayed in Beauty School, because she has completely transformed Sandy to the delight of Danny. Danny and Sandy get back together, as do Rizzo and Kenickie after Rizzo announces that she is not P.G. The whole gang is back together again and they celebrate with another memorable song.