It’s been two years since we last visited the students of Rydell High School. Sandy’s cousin, Michael, is a straight-laced English student, on his first day in an American school. Stephanie is now the leader of the Pink Ladies, and she’s broken up with Johnny, the T-Birds’ new leader. While she likes the bad boys, what she really wants is one Cool Rider, but that’s not Johnny! When Michael takes a liking to her, he steps up is bland British game, and learns to ride a motorcycle. He does his best to transform himself into Stephanie’s hot leather-clad fantasy. However, Johnny’s jealous of his new mysterious persona, and he wants some revenge. 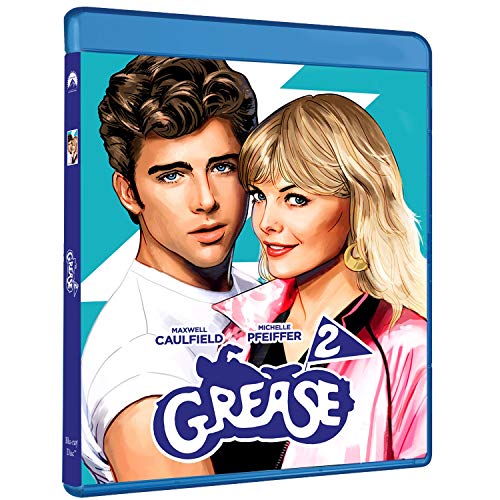 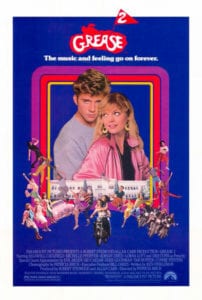 Grease 2 takes us back to Rydell High School two years after Danny and Sandy graduated. Frenchy, the “Beauty School Drop Out”, is back in High School, and hanging out with Sandy’s English cousin, Michael.

Johnny now leads the T-Birds, and Stephanie is the queen of the Pink Ladies. The couple has just broken up, and they can’t even sing about it.

Because this is High School, there are plenty of love triangles. Johnny, who wants to get back together with the uninterested Stephanie, is dating Paulette. Michael falls for the beautiful Stephanie. Stephanie thinks she is in love with a mysterious “ Cool Rider” on a motorcycle who is actually Michael in disguise. There are several other couples but I’m keeping this summary short and sweet.

Michael tries to tell Stephanie his secret identity, but he always loses his nerve, or someone interrupts him. He promises to reveal himself to her at the Annual Talent Show, which seems to have replaced the Big Dance Off.

Stephanie’s Motorcycle Crush arrives, but the T-Birds rudely chase him off. He attempts a risky jump, and it looks as if he doesn’t make it. This devastates Stephanie, and she checks out emotionally. She can barely sing her part in the talent show, and becomes entranced on stage. But that’s ok; she still wins the contest with her eerie impromptu solo.

Flash forward to the End of Year Luau (which has obviously replaced the Carnival Danny and Sandy smashed). Stephanie and Johnny are the Luau King and Queen. A rival gang shows up, and begins to wreak havoc upon the festivities.

Stephanie’s Motorcycle Love shows up just in time to save the day. He takes off his helmet for the big reveal- Michael is the Cool Rider! Stephanie embraces him, Johnny offers him a T-Bird jacket, and all the other couples pair up and sing another song about being together forever. Then we get to catch glimpses of another Rydell High Yearbook as the credits roll.