In Gremlins, Billy Peltzer’s father gives him a small creature called a Mogwai for his Christmas gift. However, the shopkeeper says a huge responsibility comes with it, and lists three rule to never break. Don’t ever get him wet. Keep him away from bright light. And the most important thing, to never forget; no matter how much he cries, no matter how much he begs… never, never feed him after midnight. Unfortunately, Billy is a rule breaker, and soon, he (and his whole town) gets a whole lot more than he bargained for. 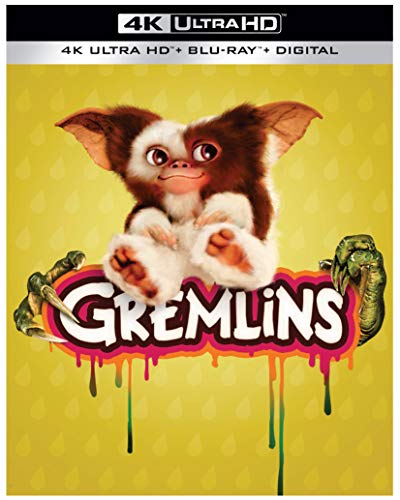 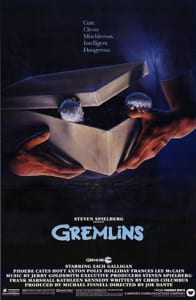 Gremlins starts in Chinatown. We know it’s Chinatown because there are a lot of Asians and the roads are mysterious and smoky. A poor man’s short round is guiding Randall Peltzer into a store that sells all sorts of Chinesy looking artifacts. Randall is an amateur inventor along the lines of one of the greatest inventors of all time – Data, and I mean Data from Goonies, not Star Trek. Randall is hoping the shop will agree to sell one of his inventions. He is distracted by some singing and finds the cutest little creature which the Chinese grandfather shop owner identifies as a mogwai. Unfortunately for Randall, he doesn’t speak Cantonese, otherwise we would understand what mogwai means and avoid the need for a movie altogether.

The grandfather refuses to sell the mogwai to Randall, but he is able to purchase the mogwai from short round. He learns the only three rules that govern owning and taking care of the mogwai: 1) keep it out of bright lights, it hates it and sunlight will kill it; 2) never get it wet, don’t even give it water to drink; and most importantly 3) never feed it after midnight – although he never explains the practical application of these rules. Midnight according to which time zone? When does this rule expire? What about water in food? These as well as other crazy questions (see Phoebe’s Cates story later in the film) aren’t answered.

It’s Christmas time in Kingston Falls, a town that looks eerily similar to Marty McFly’s Hill Valley. Randall gives this harmless little creature, who he names Gizmo, to his son Billy as an early Christmas present. Billy works at a bank for the evil bank owner, Flo from Alice. He is sweet on his co worker, the red bikini wearing whore from Fast Times.

Billy bonds with Gizmo immediately. Unfortunately a not yet coked out Corey Feldman shows up and accidentally spills water on Gizmo. Like most Asians, the mogwai multiply with ease, and these furry Asians multiply when they come in contact with water. Although this is a very painful process for Gizmo, Billy nonetheless tortures Gizmo again to give his high school science teacher (the only black guy in the movie) his own mogwai to conduct experiments on.

These new mogwai are a little different from Gizmo, they are mischievous and take to typing up Billy’s dog in Christmas lights. Late one night, Gizmo’s retarded clones beg for some “yum yums”. Since it’s 11:30, Billy gives them food. In what is likely some very nefarious subtext, Billy gives these evil mogwai some fried chicken. What Billy doesn’t know is these mogwais tricked Billy into feeding them yum yums after midnight. The next day, cocoon like pods are found and the mogwais start going through some sort of metamorphosis.

These pods soon hatch and the cute, cuddly, furry mogwais turn into evil lizard like gremlins intent on death and destruction.

As per usual, Hollywood kills the only black guy in the film first and Mr. Hansen, Science Teacher, gets taken out with a hypodermic needle in the butt. Hollywood’s message: dare to be an educated black man and you will be the first killed.

These Gremlins quickly attack Billy’s mom, but like all good middle class housewives she is good with kitchen appliances. She uses everything from a standard kitchen knife, a juicer, and a microwave to dispatch the Gremlins. She kills all of them except Stripe, the leader of the Gremlins.

Billy and Gizmo try to take care of Stripe, but apparently Stripe is looking for some man love, so he makes his way to the local YMCA where he cannonballs into the pool. Although, he probably isn’t the first disgusting naked creature to jump in the pool of the YMCA, Stripe probably does the most damage.

This dip in the pool creates an army of Gremlins who descend upon this quiet town on Christmas Eve and destruction ensues.

They attack various townspeople killing many in awesome ways such as rigging elevator chairs.

But these Gremlins aren’t just about destruction. They also know how to party. They wind up at Dorry’s tavern for some drinking and smoking. While there they play pool, video games, and poker. They swing on the fans and one dirty Gremlins takes to flashing Phoebe Cates, but who can really blame him. Like I said, these guys know how to party.

Billy and Phoebe get together as a team to take out the Gremlins. But first, Phoebe tells a horrible story about how she found her dead father in the chimney on Christmas – weird.

Billy and Phoebe find a large group of the Gremlins at a local movie theater watching their favorite Disney feature – snow white. And like everyone who attends the YMCA, they love it.

Billy and Phoebe are able to blow up the movie theater (real original Tarrentino), thus dispatching of all the Gremlins, except of course for stripe.

Stripe has a knack, not unlike our own Child of the 80s Jason, of finding the local candy store and has taken to raiding it.

Billy drives Stripe to mall and hunts him with a bat, but all Stripe is looking for is a source of water. A battle ensues between Billy and Stripe in the sporting goods store, but Gizmo comes to the rescue driving an adorable Barbie car. Stripe, however, has found a fountain and plunges in. Fortunately, this Gremlin’s tepid cloning station is right under a window and Gizmo is able pull the blinds – melting a duplicating Stripe. Although originally intended to be the bad guy, Gizmo turns into the ultimate hero.

It’s now Christmas Eve and Billy, Gizmo and his family have settled down for a safe Christmas celebration when Chinese Grandfather shop owner shows up to take Gizmo back. He imparts some ancient Chinese wisdom. He tells Billy’s family that the Gai Low (round eye) is incapable of taking care of nature – because apparently Chinese Grandfather thinks China is a good example of cleanliness and environmental responsibility. Moral learned!

At the end, Gizmo sweetly says goodbye to Billy and, like all foreigners, only speaks English when he wants to.