Based upon the novel “The Good Shepherd” by C. S. Forester, this story of an Allied convoy crossing the North Atlantic in 1942 as it faces relentless attacks by a German submarine wolf pack made up of six U-boats. The leader of the convoy’s destroyer screen is a US Navy commander making his first Atlantic crossing. The story focuses on his command responsibility as he fights the cold, the relentless night, the brutal sea, and his deep fatigue as he chases down the attacking submarines in the deadly game of cat and mouse. The exciting story portrays the elements of battle command that for a long period of time the book was used as a text at the US Naval Academy. 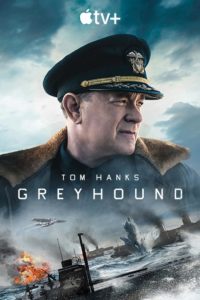 During the Battle of the Atlantic, Commander Ernest Krause (Tom Hanks) captains the USS Keeling under the radio call sign Greyhound. Greyhound is part of convoy HX-25, a fleet of 37 Allied ships, making its way to Liverpool. Greyhound, along with three other destroyers codenamed Harry, Dicky, and Eagle are charged with protecting the convoy from German submarines, known as U-boats while they cross the area of Atlantic that Allied forces cannot protect with air forces, known as the Black Pit. Krause is serving as overall commander of the escort ships despite it being his first wartime command.

While the convoy is still three days away from the resumption of air cover, the convoy begins intercepting German transmissions, indicating the nearby presence of U-boats. Greyhound’s radar operator identifies a surfaced submarine heading towards the convoy. Greyhound moves away from the convoy to intercept and gets the sub within firing range. However, the heavy seas allow the submarine to dive before the Greyhound can get a visual. However, they reestablish sonar contact as the submarine tries to slip under the Greyhound to get back to the convoy. Krause maneuvers his ship above the U-boat and fires a full pattern of depth charges, destroying the German sub.

Before Krause and his crew can celebrate, they begin to see distress rockets at the rear of the convoy. One of the merchant ships is attacked by another submarine and is sinking. Krause orders the Greyhound to assist. His ship successfully evades torpedoes on the way to the merchant ship and assists in the recovery of survivors from the merchant ship. The Greyhound then turns to rejoin the convoy and receives information that the convoy is being stalked by a German wolfpack, six U-boats who strategically stay just out of firing range of the escorts.

Krause knows that the ships will stay out of range until nightfall, when the escort ships will have the disadvantage of not being able to see at night. The wolfpack attack begins in the night with five merchant ships torpedoed and sunk. One of the submarines torpedoes an oil tanker and escapes the Greyhound by using a decoy to fool the sonar. The decoy fools Krause into wasting most of their remaining depth charges. Once again, Krause stays to rescue survivors from the burning oil tanker rather than returning to guard the convoy, a decision he will regret.

The next day, the wolfpack targets the Greyhound directly. The Germans use psychological warfare against the convoy by broadcasting taunting messages over the radio that they will all die. Krause learns his ship is down to six depth charges, which means that they cannot launch any kind of meaningful underwater attack and are limited to surface battles. The U-boats launch multiple torpedo runs on the convoy and the Greyhound, but Krause’s ship successfully avoids each of the attacks. The Dicky and the Greyhound join to sink one of the U-boats in an exchange on the surface. However, both the Dicky and the Greyhound suffer damage and Krause’s mess attendant, George Cleveland (Rob Morgan), is killed. While the Greyhound conducts a burial at sea for their lost crewman, the Eagle is attacked and sunk.

Desperate, Krause elects to break radio silence by transmitting a single word to the Admiralty, “help”. Krause is aware that doing so might expose the vulnerability of the escort fleet to the enemy, but he feels that he has no choice. As they approach the safety of the air cover zone, the remaining submarines begin an all-out assault on the destroyers. The Greyhound evades several torpedoes and sinks the lead German submarine with a full broadside. The air support deployed by the British Air Force arrives just in time. The escorts fire upon the last visible U-boat, allowing the air bomber to line up a depth charge attack and sink the submarine. The rest of the German U-boats retreat.

After the danger has passed, Krause receives radio contact from the head of the relief escorts who relieve Krause and the Greyhound from their duties to the convoy. Krause is ordered to Derry for repairs along with the Dicky and the Harry. Krause and his crew are congratulated for their fine work in sinking four German submarines. Krause turns over command of the Greyhound to a junior officer and then retires to his quarters to get some much-needed sleep. The passengers and crews of the convoy ships cheer for the escort ships as they break formation and head to Derry. Krause enters his quarters and kneels and prays to God for allowing them to make it through. He dreams of the love of his life, Evelyn Frechette (Elizabeth Shue), who he left behind in the United States before starting on the mission.