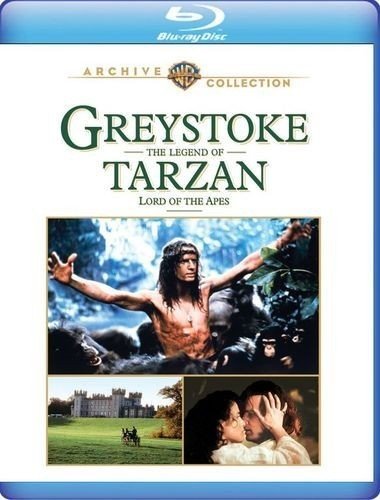 Greystoke: The Legend of Tarzan [Blu-ray]

The Warner Archive Collection (WAC), the Warner Bros. Digital Distribution division dedicated to releasing previously unavailable films and television shows, has announced that they will release Greystoke: The Legend of Tarzan, Lord of the Apes to Blu-ray this Spring. The film is directed by Hugh Hudson and stars Christopher Lambert, Andie MacDowell, Ian Holm, James Fox, and Ralph Richardson. Greystoke will be available online and in stores beginning on April 9th.

This lavish adaptation highlights John Clayton’s dual nature as a master of the African jungle and as the seventh Earl of Greystoke, heir to one of Scotland’s great estates.  An infant raised to manhood among savage apes, living by his wits and the law of the jungle, returns to society to claim his inheritance of humanity and privilege. This collision of “wild” and civilized worlds is the extraordinary saga of Tarzan, chronicled in Edgar Rice Burroughs’ popular book series.

Greystoke: The Legend of the Tarzan, Lord of the Apes was released in March of 1984 and grossed over $45 million at the box office. The film was nominated for three Academy Awards, including Best Supporting Actor (Richardson) and Best Adapted Screenplay.

Disclaimer: Affiliate links are contained in this post. This means when you click a link, and purchase an item, Movie House Memories will receive an affiliate commission. Advertisers and Affiliate Partnerships do not influence our content. See our Terms of Use about the inclusion of affiliate links on this site for more information.
March 16, 2013
547 1 minute read
Show More
Subscribe
Login
0 Comments
Inline Feedbacks
View all comments
Most Recent Posts
Facebook Twitter LinkedIn Tumblr Pinterest Reddit
Back to top button
Close
wpDiscuz
0
0
Would love your thoughts, please comment.x
()
x
| Reply
Close