When brash space adventurer, Peter Quill, steals a mysterious, all-powerful orb relentless enemies chase him. He forges an uneasy alliance with a ragtag band of misfits, leading to a desperate battle that will decide the fate of the galaxy. 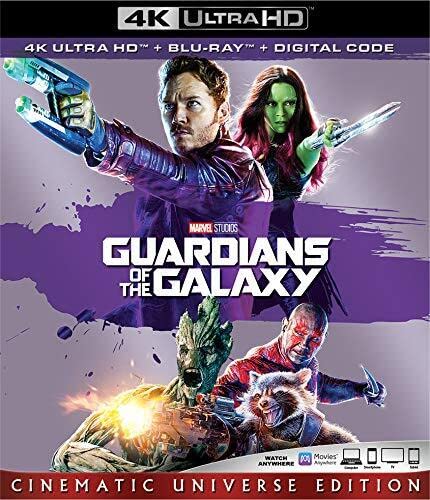 GUARDIANS OF THE GALAXY [Blu-ray]

‘Guardians of the Galaxy’ Movie Summary 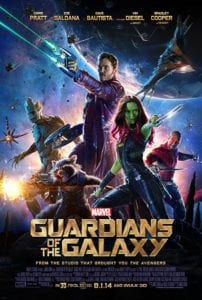 Guardians of the Galaxy begins on Earth in 1988. We find a young Peter Quill in the waiting room of a hospital as he intently listens to his Awesome Mix Tape no. 1 on his Walkman. His grandfather comes to get him so he can say goodbye to his mom. She’s near death from cancer.

His mom gives him a little present, and tells him his father was an angel just like Peter is. She wants to hold Peter’s hand one last time, but he’s too scared to take it, and she dies. Peter runs outside from the pain over losing his mother as a spaceship swoops in and abducts him.

Twenty-six year pass, and we see Peter all growns up out on the planet Morag. Now going by the name Star-lord, he’s on the hunt for a mysterious Orb which he eventually finds. Korath the Pursuer and his Sakaarans arrive to steal Star-lord’s booty, and there’s a brief shootout. Star-lord escapes from them, and then heads out in his ship, the Milano.

We next meet Star-lord’s mentor and boss, Yondu. He calls Star-lord, and orders him to hand the Orb over to him. Star-lord says no. He’s going to sell it on his own.

Out on the Kree warship, the Dark Aster, Korath reports to Ronan that he failed to retrieve the Orb, and that Star-lord now has possession of it. Ronan wants it in his little hands ASAP because he can use it for trade with Thanos in exchange for Thanos destroying Xandar. He sends Gamora out to steal it for him.

Star-lord arrives on the planet Xandar, and he takes the Orb to a broker to find out what it is since everyone seems to want it. However, when Star-lord mentions Ronan’s name, the broker wants nothing to do with it, and kicks Star-lord out of his shop.

Gamora is waiting outside, and she jumps Star-lord. Rocket Raccoon and Groot are also nearby, and they are looking to collect on the bounty on Star-lord’s head, and they try to nab him too. The Nova HQ arrests everyone, and sends them to the space prison of Kyln.

Everyone at Kyln wants to kill Gamora for being the daughter of Thanos. Drax the Destroyer hates her because Ronan killed his wife and daughter, but Gamora explains that she’s not related to Ronan. Star-lord defends her, but it’s more because he has the hots for her.

When Ronan reports to Thanos that Gamora has betrayed them, Thanos orders him to take care of her, and to get that the Orb. However, Gamora is still his favorite daughter, which pisses off his other one, Nebula, to no ends.

Back at Kyln again, Gamora comes up with a plan to sell the Orb to someone else, and Star-lord, Rocket, and Groot are in on it. They all agree to split the reward. Rocket creates a plan to escape the prison, but first, he needs a collection of things: one of the guard’s wrist devices, a prisoner’s prosthetic leg, and a battery from the tallest column in the prison.

He says it’s very, very important to take the battery LAST. Groot grabs it first, and the alarms go off everywhere as security droids fly in. That doesn’t stop them from assembling everything they need though. Drax joins them last minute when he figures that Ronan will eventually go after Gamora, and then he can kill Ronan for himself.

The prison break works, and they all head off in the Milano. They arrive at the space station Knowhere to meet the Collector. While they wait for their appointment with him; Drax, Rocket, and Groot get into a drunken fight until the Collector’s assistant arrives to get them.

The Collector examines the Orb which houses an Infinity Stone which is an all-powerful gem that can destroy planets. When the Collector’s assistant suddenly grabs it, the stone destroys her and everything in the area. Star-lord closes the Orb around the Infinity Stone, and they all flee with it. They next head to Nova Headquarters for safety.

When Ronan surprisingly shows up with his gang, they find out that Drax actually called him so he could kill Ronan. Yondu arrives out of the blue too, and we have us a whole lot of drama about to go down.

Nebula overtakes Gamora’s ship, and steals the Infinity Stone from her; leaving Gamora to fend for herself in space. Star-lord doesn’t want Gamora to die (because he has the hots for her), so he gives Yondu his location, jumps out of his ship, and floats over to her. When Yondu arrives to save them both, we see he’s piloting the same ship that abducted Peter the day his mother died.

Once Ronan is back on the Dark Aster, he tells Thanos that now that he has the Infinity Stone, he’s going to destroy Xandar himself, and then take out Thanos.

Yondu is getting ready to kill Star-lord for double-crossing him, but he spares his life when Star-lord says he has a plan to get the Orb back.

While this is going on, Drax, Groot, and Rocket join forces to save Star-lord and Gamora. They fly the Milano to Yondu’s ship, and threaten to blow it up with Rocket’s special weapon unless Yondu releases the two. However, Star-lord tells Rocket he doesn’t need to be rescued.

They now need to keep Ronan from touching the Infinity Stone to the ground of Xandar, and Star-lord is the man with a plan. Unfortunately, that plan is only about 12% complete, so Rocket comes up with one instead.

When they arrive to Ronan’s ship, Rocket blows a hole in it, and then helps Yondu and his men fight off Ronan’s ships. Inside the Dark Aster, Gamora and Nebula get into a spat over which sister is better, while Drax, Star-lord, and Groot head for its bridge.

The Nova HQ ships next link together to form a giant net to defend against the Dark Aster. Gamora defeats Nebula before Ronan orders his ships to crash into Xandar. Rocket and Yondu’s men shoot as many of them down as possible.

As the three men near the bridge, Drax kills Korrath while Groot grows branch to impale many of their attackers. At the bridge, they fight Ronan, but he proves to be too strong for them. So, Rocket crashes the Milano into the bridge to destroy Ronan. Now out of control, the entire ship plummets out of the atmosphere and down towards Xandar. Groot sacrifices himself to form a giant nest around them for safety.

The ship crashes, and everyone survives except for Groot. He’s shatters into a million pieces, but there’s no time to mourn. Ronan is still alive too. When he raises his hammer to kill them all, Quill challenges Ronan to a dance-off. That distracts Ronan long enough for Drax and Rocket to shoot Ronan’s hammer at him; freeing the Infinity Stone from it.

Star-lord grabs it before Ronan can, and it looks like it’s going to blow him up like it did the Collector’s assistant. Gamora tells him to take her hand which he does. Drax and Rocket hold hands with them too, and the power from the Infinity Stone spreads to all four of them, and surprisingly, they all survive to kill Ronan. Rocket then collects one of the sticks that came from Groot’s splinters to regrow like a plant cutting.

Yondu now conveniently shows up, and demands the Stone one more time. Star-lord gives him the Orb. Once Yondu and his men take off, one of them says that they like Star-lord, and he’s glad they didn’t take him back to his dad like they were supposed to all those years ago.

Gamora’s pretty upset that Star-lord gave up the stone so easily, but he tells her that he switched the Orbs, and still has the one with the stone in it.

They return to Nova HQ to give them the Orb that has the Infinity Stone in it. There, Star-lord learns that he’s half human and half something ancient and unknown. They tell him that his nonhuman genes are what allowed him to hold the Infinity Stone without dying.

Back on Yondu’s ship, his crew celebrates, but Yondu is a bit suspicious of the Orb, and when he opens it, he finds a doll inside. He smiles.

Star-lord finds the courage to finally open the present his mom gave him all those years ago before dying. It turns out to be Awesome Mix Tape no. 2. Their ship heads out as Rocket holds a pot with the face of a tiny Groot on a stick.

In a pre-credits scene, Groot dances to The Jackson 5’s I Want You Back while Drax sharpens his knives in the background. When Drax turns to look at Groot, he freezes, but starts again once Drax looks away again.

After the credits, Taneleer Tivan sits in the ruins of his museum with a drink. Cosmo the Soviet space dog comes over, and licks his face. Howard the Duck sits on a broken cage, and tells him that was gross.