In Guns, Juan Degas aka Jack of Diamonds is an arms dealer who wants to smuggle Chinese weapons into South America through Hawaii. He creates a diversion in Las Vegas, Nevada that lures L.E.T.H.A.L. Agents Donna, Nicole, and Shane there; leaving Hawaii totally defenseless. However, things turn personal when Lethal Agents kill Degas’ girlfriend and he kidnaps Donna’s mother. Whose guns will eventually win the day in this Las Vegas battle royale with lots of cheese? 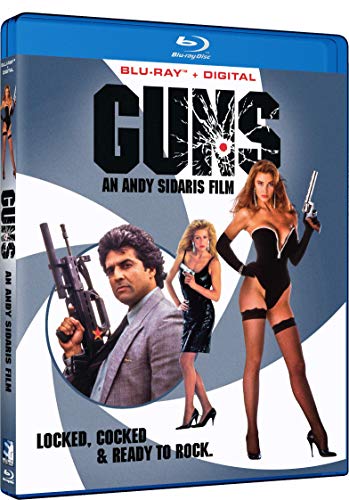 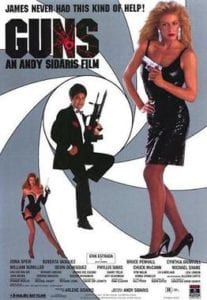 Guns begins with Edy singing on a stage in the Rio Casino in beautiful Las Vegas, Nevada. Juan Degas (the ’S’ is silent) leaves the same casino, and he and his bodyguard, Trong, get into a limo, and drive off to pickup two goons on a street corner.

Degas is an art collector with a flare for trafficking arms (the weaponry; not body parts). He hires these two goons to assassinate some unnamed person. The boys have a knack for explosives, but Degas wants a simple hit. They agree, and all of them fly off to Molokai, Hawaii where the killing will take place.

Meanwhile, in Molokai, Donna Hamilton and Nicole Justin go shopping for some sexy clothing. Their girlfriend Rocky is there too; complaining about her guests that just canceled at her restaurant while Nicole tries on clothes.

Outside the shop, the two goons arrive, and Degas gives them the name of their target. The two men then go to Rocky’s restaurant, and in the bathroom there, change into women’s clothing.

At the same time, Degas meets with Chinese arms dealer Sifu. Degas tests their weaponry on a nearby defenseless hut with gusto. We cut back to Rocky’s restaurant, and the two transvestite goons shoot Robyn, her husband, and Rocky dead.

Donna and Nicole arrive at Rocky’s restaurant, and Nicole spots two men leaving the women’s bathroom, which she finds odd. Donna and Nicole quickly figure out those guys were the two dressed as women and killed their friends. They follow them to the airport where the assassins get in a helicopter. The girls chase after them in their plane, and call Shane to let him know the situation.

The two killers land on another island and hop into a rental. As the one drives, the other shoots at the girls in their plane. However, when the car enters a tunnel, the girls lose track of it…and their plane is low on fuel by this point too, so they head home.

Once the girls land, they report everything to Shane and his partner, Bruce Christian. All four of them get in a plane to Las Vegas, because in the Andy Sidaris world, there’s only two places that exist; Hawaii, and Las Vegas. Shane is in touch with Lucas in Las Vegas, and he has him meet Edy Stark to recruit her for a gratuitous topless scene…she works for the same “Agency” as Shane and the girls, and can help find the assassins. Also at the Rio, Killer Kim and Hug Huggins are busily oil wrestling for a crowd. Lucas presumably recruits them too after a gratuitous topless shower scene of their own.

We see Degas again, and he’s angry with the two goons he hired. They killed the wrong woman. He wanted Nicole Justin killed; not the woman wearing the same dress as Nicole. So he orders Trong to kill Nicole, but leave Donna for himself. He want to do her.

Shane can’t shoot worth a damn, so Donna blows up the attacker’s plane. As the group surveys the wreckage, Shane finds a Chinese gun. However, their van is no longer running, so they hitch a ride with the California Kid to Lake Havasu City, Arizona; not too far from Las Vegas. Once there, they meet up with the other agents for a pow wow at the Ramada Inn in the shadow of the London Bridge.

Donna then meets with the Attorney General of Nevada (who’s also her mother), and she’s pissed Donna’s in her jurisdiction again because her motives might be revenge related after drug dealers killed her father.

Next we head back to Las Vegas where federal agent Abe roughly interrogates two gun dealers related to Degas’ enterprise. When they won’t talk, Abe kills them men; claiming self defense.

While Bruce and Nicole hide out in the desert, Nicole tells Bruce about her previous life as a mob informant, and then her life working with Donna. She then bangs Bruce on top of his motorcycle as the sun sets.

Next, Killer Kym heads to a local biker bar where the assassins are dressed as women. She, Hug Huggins and Large Marge attempt to arrest the killers, but they escape in a van.

We are back at the Rio Casino again where Edy performs on stage for Degas and gang. Once she leaves, Abe takes the stage and performs some magic. Edy mingles with the audience, and when she happens upon Degas’ girlfriend Cash, the two exchange some cheap insults as they have known each other for quite some time. Edy walks off to report what she knows to Agents Shane and Brown before taking the stage again. Degas has Trong follow those agents to see what they are up to.

Shane, Donna, and Brown work out at the hotel’s gym, and after Donna leaves, two new assassins show up to kill Shane. They lock the door; keeping Brown separate from their attack, and go after Shane. Brown breaks the door open, and kills one of the assassins as Shane lies unconscious in a weight machine. Donna, fresh from a shower, and quick body lotion, hears the commotion, and shoots the other assassin wearing nothing but black lingerie and a smile. Once Degas hears of this failure, he has his cross-dressing killers kidnap Donna’s mother.

We are again back in Lake Havasu, and Cash snoops on the agent’s boat while Abe fishes. Once most of the gang leaves, Cash shoots Abe’s wife Ace in the back while she’s alone on the boat; killing her. Then she finds Abe fishing in a little boat, and blows him up with a grenade.

The remaining agents return, and look over the crime scene where Edy finds a clue. After Shane and Donna arrive with a big red trunk with weapons, Donna suddenly concludes that all the trouble in Las Vegas is nothing more than one big ruse to get her and Nicole out of Hawaii so Degas can run guns from China to South America through Hawaii. Donna also learns from Shane that Degas has kidnapped her mother.

Donna orders Bruce and Nicole back to Hawaii to take out the gun runners there. The remaining crew prepare to take out Degas, but Edy is missing. She knows who killed Abe and his wife based on the cheap perfume smell the killer left behind. She goes to Degas and Cash’s hotel room, and shoots Cash dead. Degas finds Cash’s body, and vows even more revenge on Donna.

As the team gets into position to take out Degas, Bruce and Nicole head back to Hawaii….on motorcycle (not a typo). Once they stop at a rest area for food, the two transvestite killers show up to kill Nicole. However, before they can ace, Nicole spots a tattoo on one “woman’s” hand, and recognizes it as being from one of the killers. A gun fight ensure sin the bathroom where she and Bruce kill the two men.

We are now back at the Rio Casino, and Trong shows up with Donna’s mom through the rear entrance, but Kym sees them, and alerts the team. The team jumps into action, and enters the theater where Degas has Donna’s mother on stage. (It’s very quiet in the building considering it’s a Vegas casino.)

While Shane and Trong have a gun battle, Donna heads for Degas. Shane can’t shoot straight, but kills Trong anyway when he gets stage lights to fall on him. Donna finds her mom with Degas. She learns Degas is actually the same man that killed her father, and while Degas monologues, Donna steps on a magician’s trick trapdoor release. Her mother falls through the floor to safety. With a clear shot, Donna blows Degas up with her rocket launcher.

Bruce and Nicole show up to Molokai where they arrest the remaining gun runners with the Chinese arms. Edy then sings us out for a happy ending.