Ten years have passed since the events of Halloween II. During that time, Michael Myers has remained in a coma at a federal mental facility. However, Michael overhears one of the orderlies talking about an unknown niece, Jamie Lloyd, as he is being transferred to a new facility. The murderous Michael awakens from his coma and proceeds on a killing spree to get to Jamie. Michael is pursued by Dr. Sam Loomis and the Haddonfield Sheriff Ben Meeker, who are in a race against to time to save the young Jamie before the “boogeyman” comes to get her. 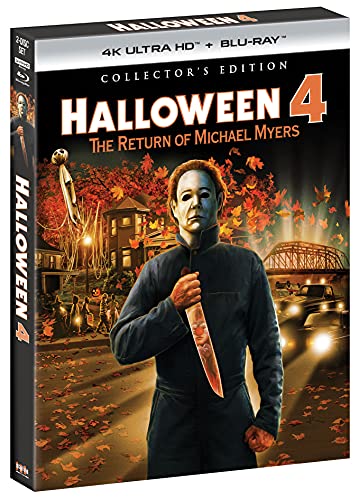 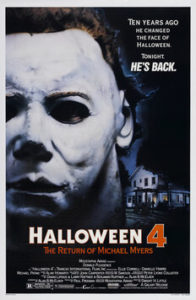 A comatose Michael Myers (George P. Wilbur) is set to be transferred to Smith’s Grove Sanitarium via ambulance on the day before Halloween. The transfer is against the wishes of Michael’s treating physician, Dr. Sam Loomis (Donald Pleasence), the man who tried to blow up Michael and himself at the Haddonfield Memorial Hospital ten years prior. During the transfer, the comatose Michael overhears the ambulance personnel discuss Michael’s next of kin, a previously unknwon niece named Jamie Lloyd (Danielle Harris) who is the daughter of Laurie Strode (Jamie Lee Curtis). Michael awakens and kills the transport staff causing the ambulance to crash into a river.

The next day, Dr. Loomis picks up Michael’s trail at the crash site and tries to convince everyone of the danger that has been unleashed. However, law enforcement and hospital staff believe that Michael’s body was likely washed away in the river. Nevertheless, Dr. Loomis proceeds to Haddonfield, Illinois, believing that is likely where Michael is heading. Dr. Loomis stops at a gas station along the way. He finds the gas station employees brutally murdered and Michael at the scene. Michael escapes in a tow truck, hitting the gas pumps during his escape causing an explosion that destroys the phone lines and Dr. Loomis’ car. Loomis is forced to hitchhike his way to Haddonfield in order to stop Michael’s murderous rampage.

Meanwhile, Jamie is still mentally suffering from the deaths of her mother and father in a car crash. She lives with her foster parents, Richard and Darlene Carruthers (Jeff Olson and Karen Alston), in Haddonfield. The Carruthers have a teenage daughter named Rachel (Ellie Cornell) who cares for Jamie dearly. On Halloween night, Richard and Darlene head out to a party and leave Rachel to babysit, despite Rachel’s desire to go to a party with her boyfriend Brady (Sasha Jenson). Rachel convinces Jamie to go trick or treating after Jamie gets a clown costume that is similar to the one Michael was wearing when he murdered his sister as a child. Michael arrives in town and begins to track Jamie throughout the town as she shops and trick or treats.

You’re talking about him as if he were a human being. That part of him died years ago. Dr. Sam Loomis (Donald Pleasence)

That night, Michael goes to the power station and kills a worker by throwing him into a transformer which knocks out all power to Haddonfield. Dr. Loomis arrives in town and goes to Sheriff Ben Meeker (Beau Starr) to warn him of Michael’s escape. Sheriff Meeker believes Dr. Loomis and the two men go out on a patrol to see if they can stop Michael. Meanwhile, Michael attacks the police station and kills nearly all Meeker’s deputies. Word of the danger gets out around the town folk and a lynch mob is formed by the town’s people to kill Michael. Unfortunately, the lynch mob kills an innocent teenager who is merely dressed like Michael. At the same time, Rachel finds Brady cheating on her with Meeker’s daughter Kelly (Kathleen Kinmont) when Jamie and Rachel stop at the Meeker house to trick or treat. Brady and Rachel argue, at which time Rachel loses track of Jamie. Jamie finds herself alone on the streets as parents start to pick up their kids when word of Michael being in town gets around. Michael begins to stalk Jamie until Rachel finds her, and Dr. Loomis and Sheriff Meeker find them.

With the Sheriff’s office in shambles, Sheriff Meeker takes Jamie, Rachel, and Dr. Loomis to his house where Brady and Kelly are still at. Sheriff Meeker summons his one lone remaining deputy (George Sullivan) back to his house for additional protection. Once the kids are barricaded in the house with the deputy, Dr. Loomis and Sheriff Meeker head back out to stop the lynch mob and to contact the state police. Meanwhile, Michael sneaks into the Meeker house and kills Kelly and the deputy. Rachel, Jamie, and Brady eventually discover the bodies and realize that they are trapped in the Meeker house with Michael. The trio runs upstairs to the attic and Rachel and Jamie attempt to escape the house by climbing on the roof. Brady stays behind to fight Michael who quickly dispatches the teenager by crushing his skull. Michael follows the girls out onto the roof. Jamie is lowered safely to the ground, but Michael attacks Rachel causing her to fall from the roof. Rachel is knocked unconscious.

Alone, Jamie runs away from a pursuing Michael until she finds Dr. Loomis on the street. Jamie and Loomis hide in a nearby school. Michael chases them and throws Dr. Loomis through a glass door. Alone again, Jaime runs through the building until she trips and falls down a flight of stairs. Michael closes in for the kill, but Rachel reappears and saves Jamie using a fire extinguisher. The lynch mob arrives at the school after hearing the school alarm going off. Mob member Earl Ford (Gene Ross) and his three friends agree to take Rachel and Jamie to the next town in their truck for safety. They meet up with the state police on the road outside Haddonfield as the state police rush in to help Sheriff Meeker.

Unbeknownst to everyone, Michael has hidden beneath the truck. He climbs out and kills the lynch mob members, including the driver Earl. Rachel pushes Earl’s body out of the way and tries to shake Michael off the truck. She knocks Michael off the truck and then rams him with the truck, knocking him into a ditch near an abandoned mine. Sheriff Meeker, Dr. Loomis, the remaining lynch mob members, and the state police all arrive at the scene. Jamie approaches the seemingly unconscious Michael and touches his hand. Michael suddenly rises and everyone with a gun opens fire on the killer. Michael falls into the abandoned mine shaft.

Afterwards, Dr. Loomis and Sheriff Meeker take Rachel and Jamie back to their home with Darlene and Richard. Darlene goes upstairs to prepare a bath for Jamie and is suddenly attacked. Dr. Loomis rushes upstairs to find an emotionless Jamie holding a pair of bloody scissors. Dr. Loomis begins screaming “No!’ repeatedly and attempts to shoot Jamie. However, Sheriff Meeker stops the doctor. Rachel, Richard, and Meeker all stare in disbelief and Dr. Loomis sobs on the stairway. The nightmare continues.