When someone or something mysteriously attacks a toy salesman, he’s brought to the hospital babbling and clutching the year’s most popular Halloween costume; an eerie pumpkin mask. His doctor, Dr. Daniel Challis, traces the mask to the Silver Shamrock Novelties company and its founder, Conal Cochran. There he uncovers Cochran’s shocking Halloween plan, and now must stop him before trick-or-treaters across the country are kept from ever coming home. 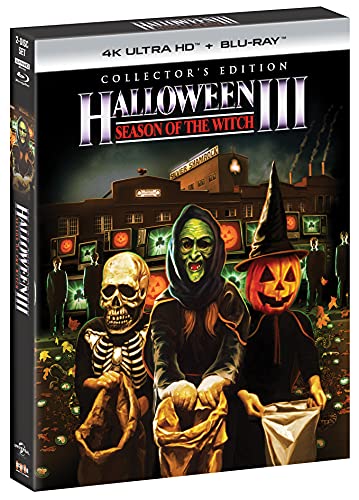 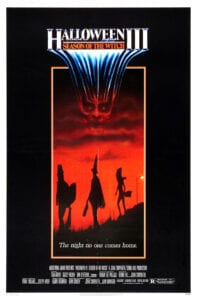 Eight days before Halloween, Silver Shamrock’s Season of the Witch begins. Two men in suits chase Harry Grimbridge down a deserted Northern California road. After killing one of the suits, Grimbridge collapses at a nearby gas station—still clutching a jack-o’-lantern Halloween mask.

At the hospital, Dr. Dan Challis, newly returned from his nightly trip to the bar, treats Harry. Challis sedates Grimbrdige because Silver Shamrock Halloween masks scare him. They are going to kill us all!

When everyone is out of the room, the second-suited man mechanically strolls into Grimbridge’s room, kills him, and then strolls out. Once the suit returns to his car, he sets himself on fire. Dr. Challis, who chased after the man, watches the car explode into flames.

Days pass, and we now have two more days ’til Halloween. Ellie Grimbridge, Harry’s hot daughter, finds Challis throwing the drunk at his local dive bar. While initially reluctant, Challis informs Ellie that her father feared for his life, and only carried with him that Halloween mask when he was treated at the hospital.

The two are able to trace both the mask and Grimbridge’s last steps to a small California village called Santa Mira. It’s the home of Silver Shamrock Novelties which produces the most popular line of Halloween masks in the country, and one catchy jingle!

When they arrive to town, the owner of the Rose of Shannon motel tells them about Silver Shamrock’s founder and owner, Conal Cochran. Cochran is an Irishman who founded the town and factory five decades ago. Challis and Ellie soon encounter other motel guests there like Marge Guttman and the Buddy Kupfer family—all of whom are in town for some last minute business with Cochran.

Later that night, while Challis and Ellie bang their biscuits together at the motel, Ms. Guttman is alone a few doors down. She finds a microchip hidden in a button that fell off one of the Silver Shamrock masks. When she takes a hairpin to the chip, a laser beam suddenly erupts from it, and horribly kills her. A shadowy group of Silver Shamrock workers retrieve Marge’s mangled body as Cochran supervises them.

There’s now one more day ’til Halloween, and Challis and Ellie pay the Silver Shamrock factory a visit. On the way out of it, Ellie spots her father’s car in a garage on the premises. The two are spooked, and get ready to go home. As Challis makes a last ditch attempt to phone law enforcement authorities outside of the community, some Silver Shamrock workers in very familiar suits snatch Ellie.

Challis tries to rescue her from Cochran’s grips, but his Stormtroopers capture him. While in their clutches, Challis learns that the suited men are actually androids that Cochran created using magical toymaker skills. With his victory drawing near, Cochran foolishly reveals that he plans to sacrifice all of the children who wear Silver Shamrock masks on Halloween night—including Challis’ two children.

On Halloween night, Silver Shamrock has a Big Giveaway planned at 9:00 PM on all three television networks. During this broadcast, the Silver Shamrock commercial will trigger a magical spell which will activate the microchips. Dust particles in them from a Stonehenge rock Cochran’s boys stole will cast a beam of its energy at the mask; inflicting great brain damage on anyone who’s wearing it. From out of their skull, an infestation of insects, snakes, and mayhem will kill anyone in the immediate area. The Kupfer family is used as a test run, and they die pretty darn quick.

Halloween night is finally here, and Cochran ties Challis up before fitting him with a sweet Silver Shamrock skeleton mask of his own. His men flip on a TV so he too will die from exposure to the Big Giveaway. However, Challis quite easily escapes from his bindings, and removes his mask. Once he gets out of the room, he rescues Ellie, and triggers the Stonehenge rock to shoot laser beams at Cochran and his workers; killing everyone below him.

Challis leaves Santa Mira with Ellie as the entire factory blows to pieces. Unfortunately for Dr. Challis, as the two are in the middle of nowhere, Ellie, who’s been pretty quiet this whole time, attacks him. The two struggle as the car careens into a tree. It’s revealed that Challis has an android version of Ellie with him, and not the real McCoy. He manages to decapitate her before finally having to destroy her using a tire iron.

Challis runs his way to the nearest gas station, which is the same one that Grimbridge ran to at the beginning. He calls the three television networks to stop the Big Giveaway commercial. With children wearing Silver Shamrock masks all over the country, Challis convinces two stations to stop it, but our screen turns black as the doctor screams into the phone to get the last station to stop it. No word on what station his kids were tuned in to at the time.