In the second film of the new Halloween trilogy, Michael Myers is imprisoned in the basement of Laurie Strode’s house as it is engulfed in flames. A wounded Laurie is taken to the hospital by her daughter Karen and granddaughter Allyson while unknowing firefighters respond to the burning home and unwittingly release the killer to terrorize Haddonfield, Illinois again. However, this time the citizens of Haddonfield organize and go out looking for blood themselves chanting that “Evil dies tonight!” 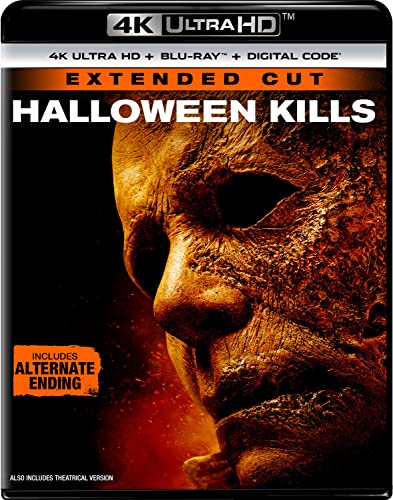 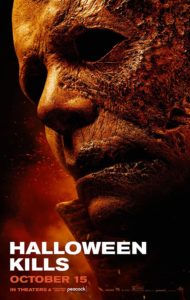 The film picks up where the last film, Halloween, left off. Laurie Strode (Jamie Lee Curtis), her daughter Karen (Judy Greer), and granddaughter Allyson (Andi Matichak) are rushing to a hospital after leaving Michael Myers (Nick Castle and James Jude Courtney) caged in Laurie’s basement as her house was consumed by a fire. Laurie is bleeding from a stab wound from Michael and yells at passing fire trucks to let her house burn, hoping that it will kill Michael. Nearby, Deputy Frank Hawkins (Will Patton) is found by Allyson’s boyfriend Cameron Elam (Dylan Arnold) lying along the side of the road after he was stabbed and runover by Dr. Ranbir Sartain (Haluk Bilginer) in the last film.

Hawkins flashes back to his youth (Thomas Mann) to the night of October 31, 1978, the first night that Michael attacked Laurie. He recalls searching for Michael at the Myers’ house with his partner Pete McCabe (Jim Cummings). Michael captures McCabe, and Hawkins accidentally shoots and kills his partner while trying to hit Michael. Michael eventually escapes the house where he is surrounded by police. Dr. Sam Loomis (Tom Jones Jr.) tries to kill his patient by shooting him, but Hawkins stops him. Sheriff Loomis helps cover up for Hawkins’ accidental killing of his partner and blames McCabe’s death on Michael. In the present, Hawkins feels guilt for his actions in 1978 and resolves to kill Michael in the present as he is taken to the hospital.

Meanwhile, the firefighters respond to Laurie’s burning house and attempt to put out the blaze, unaware of the danger imprisoned in the basement. They inadvertently free Michael from his fiery prison, and the murderer proceeds to kill the entire fire team. Afterwards, Michael murders Laurie’s neighbors Sondra (Diva Tyler) and Phil (Lenny Clarke) before proceeding into Haddonfield again. At the same time, Laurie undergoes emergency surgery at the hospital while both Karen and Allyson sit and wait.

Nearby, Tommy Doyle (Anthony Michael Hall) is at a local bar celebrating the 40th anniversary of Michael’s arrest and imprisonment with fellow Michael survivors, Marion Chambers (Nancy Stephens, Lindsey Wallace (Kyle Richards), and) Lonnie Elam (Robert Longstreet), Cameron’s father. They toast an absent Laurie Strode. An emergency broadcast comes over the television at the bar and alerts everyone of Michael’s escape from confinement and his killing spree over the course of the night. A couple at the bar, Marcus (Michael Smallwood) and Vanessa (Carmela McNeal), leave the bar and find someone in the back of their car. They alert the other bar patrons, who respond under the presumption that it is Michael. The mysterious person steals the car and drives away but crashes a short distance away. As the small mob led by Tommy arrives at the accident, they find that the driver has escaped. A vengeful Tommy begins to organize a mob of Haddonfield citizens, including Lonnie, Lindsey, and Marion, to begin searching the town to find and kill Michael before he can kill anyone else.

I always thought Michael Myers was flesh and blood, just like you and me, but a mortal man could not have survived what he’s lived through. The more he kills, the more he transcends into something else impossible to defeat. Fear. People are afraid. That is the true curse of Michael. Laurie Strode (Jamie Lee Curtis)

At the hospital, the police inform Karen and Allyson of Michael’s escape from the fire. Karen decides to withhold the information from a still recovering Laurie while Allyson reconciles with Cameron and joins Lonnie’s group in hunting down Michael to avenge her own father’s death in the previous film. Laurie and Hawkins are placed in a hospital room together where they both awaken from their surgeries and reminisce about their prior relationship.

Not long after, Lindsey finds a group of teenagers at the park who had seen Michael Myers stalking them. When they see Michael holding the bloody mask of their friend, the pair and Lindsey begin to panic. Michael ambushes Marion, Vanessa, and Marcus who are sitting in Lindsey’s car nearby. The trio are each killed, and Lindsey is chased into the woods by Michael. She hides underneath a bridge and manages to escape. Allyson, Cameron, Tommy, and Lonnie arrive at the scene and discover the bodies of the Marion, Vanessa, and Marcus on the playground all wearing Silver Shamrock masks (from the 3rd Halloween film). They also find a traumatized Lindsey, injured but alive. Tommy takes Lindsey to the hospital while Lonnie, Allyson, and Cameron continue their search for Michael.

Lonnie’s group maps out the path of Michael’s killings and determine that he is heading to the old Myers’ house where two men, Big John (Scott MacArthur) and Little John (Michael McDonald), now live. At the hospital, Tommy reunites with former Haddonfield sheriff Leigh Brackett (Charles Cyphers) who is now a security guard at the hospital. Brackett was the father of Annie Brackett who was killed by Michael in 1978. Tommy begins to rally the people in the hospital to hunt for Michael by chanting “evil dies tonight.” Laurie overhears that Michael survived the fire and prepares to leave the hospital to stop him.

Lance Tovoli (Ross Bacon), a fellow patient of Smith’s Grove who escaped custody along with Michael when their bus crashed, comes into the hospital. As the person who stole Vanessa’s car, he is mistaken by Tommy for Michael. The hospital crowd begins to chase the man through the hospital despite Laurie and Karen’s protests that he is not the killer. Sherriff Barker (Omar Dorsey) and his deputies are powerless to stop the angry mob. Karen manages to reach Lance and tries to help him escape the mob. Desperate, Lance jumps of the window of the hospital and falls to his death, just as Tommy realizes that he has the wrong man. In the aftermath, Brackett grows concerned that the mob is turning into monsters from their fear and panic. Laurie, who is injured during the chase, asks Karen to collaborate with Tommy to hunt down Michael before returning to her hospital room with Hawkins.

At the old Myers’ house, Lonnie enters the house alone leaving Allyson and Cameron in the car. He is attacked by Michael who has arrived at the house and killed both Big and Little Johns. Allyson and Cameron hear Lonnie’s gunshots and run inside to help him. They too are attacked by Michael. Michael throws Allyson down the main stairway which breaks her leg. Michael viciously attacks Cameron before killing him by breaking his neck. Michael prepares to kill Allyson when Karen suddenly arrives and stabs Michael in the back with a pitchfork. Karen steals Michael’s mask and taunts him with it to get Michael away from injured Allyson.

Michael does follow Karen who leads him into the path of Tommy’s mob. The mob attacks Michael and seemingly kills him. Karen leaves to help Allyson back at the Myers’ house. Brackett prepares to shoot Michael at close range when the notorious killer recovers and kills the entire mob, including Brackett and Tommy who he kills with a baseball bat. Back at the Myers’ house, Karen sees a ghostly image of a young Michael staring out of his bedroom window and goes to investigate. Karen finds no one in the room and stares out the window of Michael’s old bedroom. At the same time, Laurie stares out the window at the hospital and tells Hawkins how Michael gains strength with each death that he causes and that is why he needs to be stopped for good. Back at the Myers’ house, Michael appears behind Karen and begins stabbing her to death. After he is done, Michael once again stares out the window of his old room.