Happy Gilmore is a failed hockey player who can’t seem to make it in the professional ranks. His girlfriend has left him and the IRS has seized his grandmother’s house for her failure to pay back taxes. After Happy learns that his years in hockey have given him the ability to drive a golf ball an extraordinary distance, Happy enters the pro golf circuit in order to make enough money to pay off his grandmother’s debt. However, the unorthodox Happy upsets the stuck up world of professional golf with outrageous style and lack of reverence for the sport. 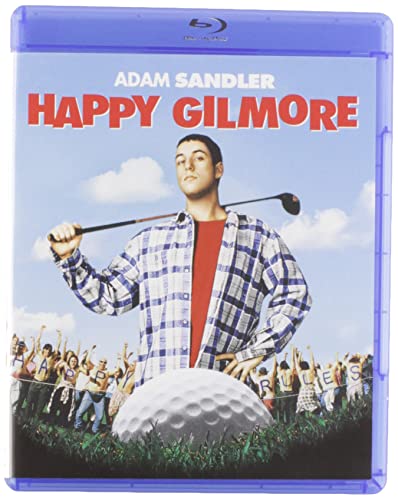 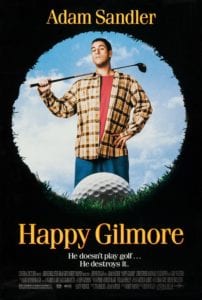 Happy Gilmore (Adam Sandler) is a failed aspiring ice hockey player. He lacks the necessary on-ice skills and has a horrible temper to make it in the big leagues. However, Happy does have a powerful slap shot. Happy’s continuing failure and obsession with hockey causes his girlfriend to leave him. To make matters worse, Happy learns that his grandmother (Frances Bay) has not paid her taxes for years and owes the IRS $270,000 in back taxes. The IRS repossesses her home and intends to auction it off in 90 days unless she can repay the full amount. Happy is forced to place his mother into a nursing home with an abusive male nurse (Ben Stiller).

As some movers are repossessing the furniture in the house, they challenge Happy to a long drive contest with Happy’s grandfather’s old golf clubs. With no golf skills, Happy hits the ball with his slap shot-style swing driving the ball an amazing 400 yards away, winning $40 from the movers. Seeing a way to make some cash, Happy begins hustling golfers at the local driving range. Chubbs Peterson (Carl Weathers), a local golf pro and former golf star, sees Happy’s drives and believes the hockey player has some golf potential. Chubbs left the professional golf tour after his right hand was bitten off during an alligator attack. Chubbs convinces Happy to enter a local tournament to earn a spot on the Pro Golf Tour. Happy believes he can earn enough money in a short time to pay off his grandmother’s IRS debt.

Happy wins the tournament and a spot on the tour. Happy quickly becomes a fan favorite due to his long drives and his outrageous behavior, such as asking fans to cheer instead of staying quiet, and hiring a homeless man named Otto (Allen Covert) as his caddy. His popularity irks arrogant pro Shooter McGavin (Christopher McDonald) who sees this year’s golf season as his victory lap. Happy’s lack of golf etiquette taints McGavin’s otherwise great year.

Happy’s drives are awesome, but his putting and short game are terrible. His outbursts eventually draw the attention of Tour Commissioner Doug Thompson (Dennis Dugan), who tries to kick Happy off the tour, but has to reconsider once he sees the increase in attendance, ratings, and sponsorship that Happy brings to golf. Thompson directs public relations head Virginia Venit (Julie Bowen) to work with Happy to polish up the rough edges.

Virginia begins to have a calming influence on Happy and his golf performance begins to improve. However, Happy is paired with Bob Barker (Bob Barker) during a pro-am celebrity tournament that goes wrong. Shooter hires a heckler named Donald (Joe Flaherty) to get under Happy’s skin which causes Happy to melt down. Happy and Barker get into a fistfight on national television. Happy loses the fight to the elderly Barker, but even worse, he is fined $25,000 and suspended from the tour for one month which puts him further away from his goal to pay off his grandmother’s debt.

Virginia leaps in to help Happy’s grandmother and secures him an endorsement deal with Subway, allowing him to earn the remaining money needed to take back his grandmother’s foreclosed house. However, when Happy shows up to bid on the house at the auction, he is outbid by Shooter who buys the house out of spite. Shooter offers to sell it to Happy on the condition that he agrees to quit golf and leave the tour. Having no interest in golf, Happy initially agrees, but Virginia talks him out of it, telling him that his grandmother would rather see Happy be successful than have her house back. Happy makes a counter proposal to Shooter. At the upcoming Tour Championship, if Happy wins, Shooter will return the house, but if Shooter wins, Happy will quit the tour.

Happy looks to improve his short game in preparation for the Championship so he returns to Chubbs to coach him. Chubbs takes him to a miniature golf course to practice his putting. Happy’s game improves greatly as he finds his happy place when he puts. Happy gets Chubbs a gift to thank him for his help, but when Chubbs opens the package and see the head of the alligator that bit off his hand, Chubbs is so startled that he falls out of an open window to his death.

After Chubbs’ death, Happy is more focused than ever. At the beginning of the Tour Championship, Happy plays very well and even leads Shooter by the end of the third round. On the fourth and final day, Shooter gets desperate and calls on Donald for help again. Donald shows up and hits Happy with his car. Happy walks away from the accident, but he is injured and is unable to hit the ball as far on his drives, which causes him to fall into a slump. Shooter retakes the lead in the Tour Championship. However, a surprise visit from his grandmother focuses Happy, who regains his confidence and rallies to match Shooter’s score with one hole to play.

On the 18th hole, a TV tower that had been hit by Donald’s car earlier falls over, blocking the green. Happy refuses to take a drop and decides to take a miraculous trick shot like he did at the mini golf course with Chubbs. Happy sinks the crazy put and wins the Tour Championship and his grandmother’s house. Unable to except losing, Shooter grabs the winner’s gold jacket and tries to run away, but he is chased down by Happy’s old boss, Mr. Larson (Richard Kiel) and a mob of fans who beat Shooter up.

After winning his grandmother’s house back, Happy sees a vision of a two-handed Chubbs, Abraham Lincoln, and the alligator sitting together. Happy waves at them as Happy’s grandmother, Virginia, and Otto look on in confusion.