In Hard Hunted, the infamous gangster named Kane is back, but this time, Roger Morre’s son, Geoffrey, plays him. Kane plans to sell a nuclear trigger that’s secretly hidden in a jade Buddha to the highest bidder. However, after Lethal agent Mika steals it, Kane sends his assassin, Raven, to retrieve it. This leads to Mika dying in front of Donna and Nicole in Sedona, Arizona, and then to Donna being kidnapped and losing her memory. Will the girls finally take out Kane, or will he get his revenge against the Lethal agents. 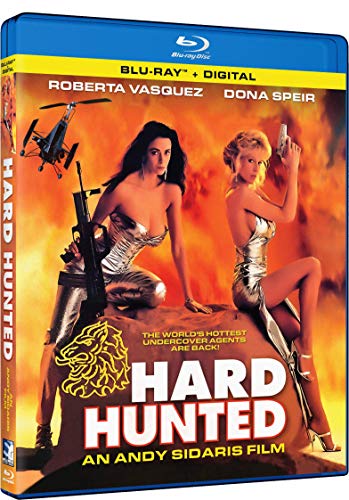 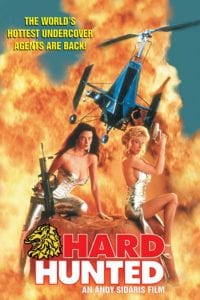 The international criminal known as Kane receives a jade statuette of Buddha in a Lotus Position while on his yacht in a channel between some Hawaiian islands. Mika and Silk are there to spy on Kane, and witness him take possession of it. The figurine is very important to his plan of world domination as inside its hallow chamber is a nuclear weapon trigger.

We cut to Edy’s in Molokai where she does a cute song and dance for us before we switch to KSXY, where Ava is a DJ. She reads a secret message over the air to signal to Cole to surf out to Kane’s yacht, and pick up Mika. We then cut back to the aforementioned yacht where Kane schtoops Silk in her Lotus Position. Mika takes this opportunity to steal the Buddha while Kane’s distracted/sedated.

Cole picks Mika up on his windsurf board, and the two drive off in a jeep. Mika calls into KSXY as a “loyal listener” to give them a secret code that her cover’s been blown, but she has the Buddha. Ava tells her to head to Sedona, Arizona to relax. So, Mika catches the next Red Eye to Phoenix to meet with Donna and Nicole outside of Sedona.

We cut to the Pentagon where Lucas, the head of the L.E.T.H.A.L. team, talks to a General and a Senator about Kane and the missing nuclear trigger. Edy and Ava call Lucas there to let him know that Mika has the trigger.

Back on Kane’s boat, Kane’s alerted to the theft and Mika’s absence. Cole shows up on Kane’s boat to let him know that Mika has the Buddha; revealing that he’s a double agent working for Kane. To keep from being killed for his failure to stop Mika, Cole tells Kane that she’s headed to Sedona. Kane spares his life, but has him tossed off the boat.

Kane calls his assassin named Raven who works in Arizona to kill Mika, and then bring the Buddha back to him. Mika lands at Phoenix Sky Harbor, and drives north to Sedona. Raven follows overhead in a gyrocopter, and attacks as Mika arrives to meet Donna and Nicole. Raven guns Mika down; leaving the girls scrambling.

Mika dies, but Donna is able to retrieve her purse with the Buddha in it before they get in a dune buggy and drive off. Raven lands his gyrocopter to find Mika doesn’t have the jade, and starts pursuing the girls. Luckily for them, Raven shoots like a stormtrooper.

Meanwhile, two bumbling local cops drive up, and talk about the temperature hitting 110 that day. Christian Sidaris, as cop number one, throws out the Arizona classic “…but it’s a dry heat” joke, and then spots Raven shooting from the gyrocopter. He calls in backup, and then decides to shoot at the gyrocopter with only a pistol and shotgun. Raven blows the cop and his partner up behind the Welcome to Sedona sign with a missile. However, Raven is forced to call off his pursuit when the military sends in three helicopters of their own to take Raven out.

The girls flee Sedona, and head down I-17 to catch a plane at Sky Harbor. Raven calls in Number Six to tail the girls before they escape. When Nicole calls the Pentagon to talk to Lucas, Six catches up to them, but Lucas is nowhere to be found. The girls leave Lucas a message, and then hightail it back to Honolulu. Six learns enough to inform Raven of the their destination, and promptly cals him.

Raven next calls Kane to inform him he failed to capture the girls, but that they are headed to Honolulu. Kane orders Raven there so he can redeem himself. Lucas calls Edy to tell her that Mika’s dead, and has her get the girls, Bruce Christian and Shane Abilene all together in Molokai for a meet up with him.

We cut to Shane teaching Becky to shoot in front of KSXY, even though he can not hit the broad side of a barn. He misses three Pepsi cans at point blank range, so Becky grabs his gun, and shows him how to properly use it. Ava arrives to let Shane know that Mika is head, and then gives Bruce a coded message over the airwaves to meet up with everyone.

Bruce and Shane show up to the meeting point to find only Cole there. Bruce and Shane are suspicious of him, but don’t say anything. While Cole does a poor job of spying on them, Donna and Nicole learn of the rendezvous from another coded message from Ava.

From Honolulu, the girls take off in N99786, and fly to Molokai. Cole watches on, and alerts Kane’s men at the right moment. They snap into action to steal back the Buddha. Ironically, Donna’s been carrying Mika’s little purse this whole time, and as she attends to her plane alone, she takes a moment to look into the purse. She finds the jade statue as one of Kane’s men sneaks up behind her, and tases her unconscious. He then loads her into his Geo Tracker as another plane lands on the runway.

The idiot henchman screeches his tires as he drives off to catch that plane. This alerts Bruce, Shane, and Nicole, and they jump into action. While Shane manages to take out their own van’s side view mirror, Bruce and Nicole shoot and kill Donna’s kidnapper, but Kane’s plane is able to fly off with Donna and the jade statue inside.

Once safely in the air, Kane’s men call him, and Kane taunts Donna before ordering his men to toss her out of the plane. Instead, Donna tosses the co-pilot out of the plane, grabs a parachute, pulls the pin on a random grenade (not sure why there’s one readily available on it), jumps out, and blows up the plane; killing the remaining pilot.

As Donna lands on a beach on Laysan Island, Kane orders Cole to get the Buddha. Silk calls Ava to have her update the team of the new situation. Donna lies unconscious on the beach, and her situation turns from bad to worse when some men find her. Cole then boards a helicopter to retrieve Donna. Lucas arrives on Molokai, and finds Edy for a debriefing.

The L.E.T.H.A.L. agents discern Donna’s location on Laysan Island which is about 200 miles away from them, and set out to bring her back. First though, Edy bangs Lucas as even James Bond has time for sex. The next morning though, Lucas informs the team that the Buddha is the main objective; not Donna. Lucas takes a moment to reveal why the statuette is more important, and orders the team to either retrieve it or destroy it. Period.

Donna wakes to find Rodrigo Pico and his merry men holding her hostage. He knows who Donna is, but she seems to have amnesia from the fall, so she doesn’t have a clue she’s a federal agent. Pico plans to turn her over to Kane for the reward money, and soon Cole arrives to retrieve her. With Kane on his way, Cole unties Donna. However, she quickly disarms him which forces Pico to punch the highlights out of her hair.

We cut to what looks like Lake Havasu, Arizona where the ACME hitman, Wiley talks to his partner Coyote (those are their code names; not their real names if you’re wondering) about the ACME A33Z mini hovercraft. They then head to Kane’s place (in Hawaii) so they won’t be late for a meeting with him. Kane wants the men to kill Edy, and they promise take care of both her and Lucas.

Coyote whips out the hovercraft’s owner’s manual, and learns how to drive it while Wiley picks up an ACME machine gun. They head out, and crash Edy and Lucas’ little party on the lake shore. A gun fight ensues. Of course Edy has an explosive device in her shoe, and Lucas uses a fishing rod to toss it on our assassin’s boat. The boat blows up, but Wiley and Coyote both manage to survive. Lucas and Edy arrest our little ACME hitmen instead.

Back on Laysan Island, Pico and his men tie up Cole, and take the little Buddha; realizing there’s something of value in it. Bruce and Nicole are now on the island too, and the set out to rescue Donna. A gunfight ensues between them and Pico’s men. Cole rides off with Donna on a jet ski in the melee while Bruce and Nicole fight Pico. Nicole shoots Pico dead while he has a knife to Bruce’s throat.

Raven meets with Kane on his yacht, and Kane orders him to get the jade at all costs; killing anyone who gets in his way. We cut to Lucas banging Edy yet again, the transmitter hidden in Kane’s necklace begins beeping. This lets the L.E.T.H.A.L. agents know Kane is on the move. So, Bruce and Nicole take a moment to bang each other in the ocean while they wait for him.

Raven shows up on the island in his gyrocopter to find Pico and all of his men dead. On a another beach, Cole takes advantage of Donna’s amnesia to lie to her that he’s her friend and lover. He tricks her into banging him seaside.

Finally, after a way-to-long wait, Bruce and Nicole show up to battle Raven from his gyrocopter. While listening to Ava on KSXY radio, Donna regains her memory. She stabs Cole with a machete, and kills him. before claiming to have faked her orgasm with him.

Donna meets up with Bruce and Nicole just as Raven flies in and shoots Bruce in the leg. Raven lands the gyrocopter, and puts its weapons on automatic. He demands the jade statuette from Donna where he takes it, and then flies off.

However, Kane arrives in his yacht, and orders Raven to swing back, and kill the three agents…big mistake. Donna blows him, his gyrocopter, and the relay from inside the statuette to pieces with her gun. Kane is a bit pissed, but Lucas and his team arrive which forces Kane to flee the scene.

Bruce, Nicole, and Donna celebrate on the beach. Ava gives a parting message to all as Donna says Kane will be back, and so will she.