Harold Chasen is a depressed, death-obsessed 20-year-old trust-fund baby who spends his free time attending funerals and pretending to commit suicide in front of his mother. At one such funeral, Harold befriends Maude, a 79-year-old woman who has a zest for life that Harold lacks. The two spend much time together, and she exposes him to the wonders life has to offer. Harold’s mom meanwhile wants him to marry well. He sabotage’s his mother’s attempts to set him up with a potential wife, and soon announces to her and friends that he is going to marry Maude. However, Maude has a surprise for Harold that is all too real. 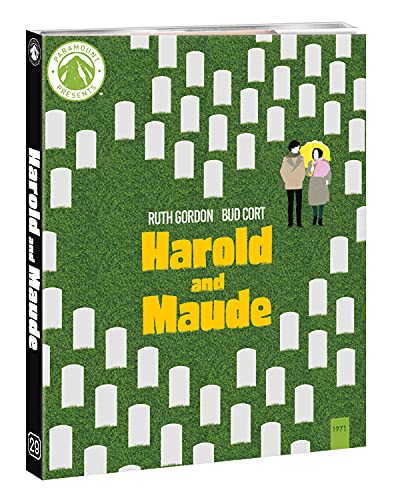 In the film, Harold Chasen (Bud Cort), who has acquired a weird fetish of constructing elaborate but mostly realistic bogus suicides, was born into money beyond means. That enables him to attend random funerals to revel in sadness to the point he constructs his own hearse to drive around town.

Meanwhile, his socialite mum (Vivian Pickles) basically accepts his weirdness as a coming-of-age phase, but arranges appointments with a psychoanalyst anyhow to pick his brain.

Soon, Harold meets Maude (Ruth Gordon), at one of his random funeral visits. The two share the same love of emotional darkness. However, she is also full of zest, and displays a love of life as opposed to his bleakness. In time, the pair grow quite fond of each other which is unusual as Maude is around 60 years older than Harold.

She introduces her new junior best friend to the joys of art and music; including playing the banjo, and continuing her open view of how good life is. Harold’s mum though insists on trying to find him a wife. Although it is against his wishes, she brings young candidates into their home. However, Harold always finds a way to turn them away; usually through one of his brutal pranks.

In one of many unlikely tender moments with Maude, Harold tells her his motivation of the fake suicides; back at his boarding school, he accidentally caused an explosion that was so severe, authorities thought he’d perished in it. With this revelation, Harold bursts into a flourish of ‘real’ tears and says he enjoyed being dead.

Soon after this crying episode of frankness, romance blooms between the two. Harold announces he’s in love, and wishes to marry Maude. Quite rightly, Harold’s mum is horrified as are his family cohorts.

As Maude’s 80th birthday approaches, Harold arranges a surprise party for her. When the day comes, she really is shocked at the effort and says directly that she couldn’t imagine a better farewell.

Engaging in this comment, Harold wonders the meaning of that statement. Maude admits to have taken an overdose of sleeping pills earlier to prepare to die at midnight at the perfect age of 80.

Harold goes nuts, and rushes her to the hospital. When the doctors fail to resuscitate her, Harold suddenly has nothing. He becomes as pale as a ghost.

Triggering an aggressive reaction, we see Harold’s hearse speeding towards a cliffs edge. It hurls off, Thelma and Louise style. However, Harold is okay as we see him standing atop the cliff.

Wide eyed with a wry smile, Harold strolls off; plucking at the banjo Maude gave him as credits roll. All this happened in a week, and that is Harold and Maude.