Harry Potter and the Sorcerer’s Stone begins with Harry Potter who thinks he’s a normal boy. However, on his eleventh birthday, he discovers his deceased parents were a wizard and witch. Furthermore, he’s very lucky himself to be alive. Soon he finds himself a student at their old school after a mysterious giant appears with a letter of admittance for it. Once there, Harry meets two friends with whom they will share many adventures. 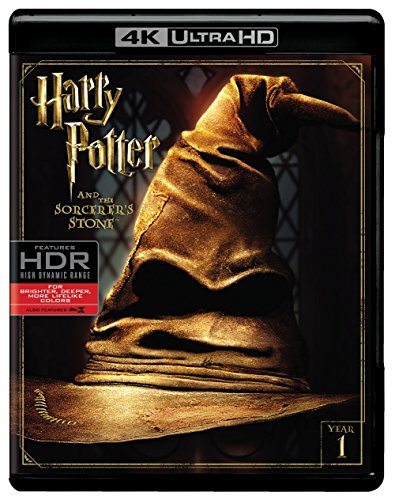 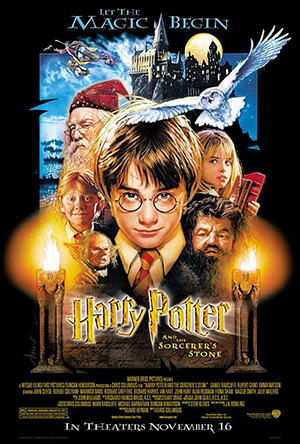 Harry Potter and the Sorcerer’s Stone is a faithful adaptation of the J.K. Rowling book opens with Professors Albus Dumbledore (Richard Harris) and Minerva McGonagall (Maggie Smith) awaiting the arrival of a very special one-year-old named Harry Potter (Daniel Radcliffe). He has just survived a curse from the powerful Dark Lord. This evil wizard is so feared; no one likes to use his name, Lord Voldemort.

The Dark Lord killed Harry’s parents, but his evil body was destroyed when he attempted to do the same to the young Harry. Hagrid (Robby Coltrane) arrives on a motorcycle with his young charge. Harry bears a lightning bolt scar as a result of his encounter with “The One Who Shall Not Be Named.” The child is left with a note at the doorstep of a modest house.

The house belongs to Harry’s Aunt and Uncle Dursley. These muggles or humans without magical power raise Harry. They spoil their son, Dudley, while neglecting and despising Harry. His room is a closet under the stairs. They do not treat Harry with any kindness or share with him about his history.

Near Harry’s eleventh birthday, an owl messenger brings a special letter addressed to Harry. His Uncle refuses to allow Harry to read it. More owls arrive with more letters. In frustration, the stubborn Uncle takes the family where he thinks no one will find them, a lonely ocean side fortress.

The gigantic Hagrid arrives in the middle of the night bearing the letter and a birthday cake for Harry. The selfish Dudley eats of the cake while Harry is talking to Hagrid. Harry finally is able to read his letter and learns that he has been invited to attend Hogwarts School of Wizardry and Witchcraft. He learns of his magical heritage and his fame in the wizard world as a survivor of a powerful curse.

Hagrid escorts Harry to Diagon Alley in London. Harry sees the wizarding world, which is unknown to muggles, for the first time. Hagrid takes him to Gringott’s Bank where Harry learns he has an inheritance from his parents there. Hagrid carefully picks up a package that he will give to Prof. Dumbledore, the Headmaster of Hogwarts. Harry is unaware of what is in the package.

Hagrid helps Harry purchase everything that he needs for Hogwarts, including his own wand from Olivander’s Wand Shop.

They arrive at Hogwarts

When they arrive at Hogwarts, they are ushered into the great hall and where they must succumb the Sorting Hat. The magical hat chooses the house each new student will be placed in; Gryffindor, Slytherin, Ravenclaw, or Hufflepuff. The hat places Hermione and Ron in the House of Gryfindor. Harry begs the hat to place him anywhere but Slytherin, the house of the sinister Potions Professor, Severus Snape (Alan Rickman), and the arrogant Draco Malfoy (Tom Felton).

Hogwarts is a magical place with moving staircases and roaming ghosts. Harry, Ron, and Hermione accidentally stumble upon a forbidden area while exploring. They encounter a three- headed dog, which appears to be guarding something. They learn that Harry’s vault at Gringott’s had been broken into and Harry wonders if they wanted what Hagrid took from the vault.

The kids question Hagrid about the dog, which they learn Hagrid has ironically named Fluffy. Hagrid does not wish to discuss it, but lets slip the name Nicolas Flamel.

Harry and Draco Malfoy are fast enemies. While Draco is tormenting Harry, it is discovered that Harry has natural Quidditch skills. He is inviting to join the team as a seeker. Hermione points out to him that his Father, James Potter, was also a seeker.

Hermione’s perfectionism annoys Ron. On Halloween, Ron hurts Hermione’s feelings and she retreats to the girl’s restroom as a troll runs loose in Hogwart’s. Harry and Ron realize that the hiding Hermione does not know about the troll. The boys find Hermione and help her defeat the troll. The three become the best of friends.

Harry’s first Quidditch match is eventful. It appears that Professor Snape is cursing Harry, rendering him temporarily unable to play. Hermione sneaks under the bleachers and sets fire to Snape’s robe. Harry is able to finish the game triumphantly, catching the golden snitch. Gryffendor beat Slytherin.

Harry and Ron remain at Hogwart’s for Christmas. Harry is excited to receive gifts. The Dursleys did not shower Harry with gifts as they did Dudley. He receives an anonymous present of an invisibility cloak. Harry uses the cloak to research Nicolas Flamel in the restricted area of the Hogwarts Library. He learns of the Sorcerer’s Stone, “which produces the elixir of life, which will make the drinker immortal.”

While invisible, Harry witnesses Snape harshly questioning Prof. Quirrell (Ian Hart), the Professor of Dark Arts. Snape wants to know how to deal with Fluffy. The children are convinced that Snape is up to no good and desires to steal the Sorcerer’s Stone. They go to Hagrid with their suspicions, but Hagrid is unconvinced. Draco spies upon the trio, reports them, and they all are given detention.

The punishment is to help Hagrid in the Forbidden Forest. Harry sees a dark, hooded figure drinking the blood of a unicorn. Simultaneously, his scar begins to burn. The figure menacingly approaches Harry until a centaur scares it off. The centaur informs Harry that only the basest beings would kill a unicorn and drink it’s blood. Voldemort would to strengthen himself and keep him alive.

The trio fears that Voldemort is trying to steal the Sorcerer’s Stone and they rush to tell Professor Dumbledore. Dumbledore is away from Hogwarts and Professor McGonagoll listens to their fears and assures them that the Stone is safe.

Harry, Ron, and Hermione decide to secure the stone themselves. They navigate a magical obstacle coarse set in place to protect the treasure. They successfully play a life-sized version of Wizard’s Chess. When they reach the final chamber, Harry must enter alone.

In the chamber, Harry catches Professor Quirrell attempting to steal the Sorcerer’s Stone. The remains of Voldemart are a talking head on the back of Prof. Quirrell’s head. He has been hiding under a head wrap. He looks like a grotesque parasite. Quirrell turns to stone and crumbles at the touch of Harry’s hands. Harry passes out from the pain in his head from being close to the Dark Lord. Voldemort leaves Quirrell to die.

Harry wakes up in Hogwart’s Infirmary. Professor Dumbledore is back and reveals to Harry that he has destroyed the Sorcerer’s Stone. He also gives Harry more of his life story which Harry has not known. His Mother’s great love for him and sacrifice was what prevented the evil curse from killing him as a baby and prevents Voldemort from touching him.

The film closes with a Feast as the school announces the final House points for the year. It appears that Slytherin has won until Professor Dumbledore awards additional points to Harry, Ron, Hermione, and Neville Longbottom for their bravery. Gryffindor won again. Good has defeated evil until the next book or film.