Heaven’s Gate takes place in Wyoming, 1890. James Averill is the Sheriff of Johnson County which is a county that foreign immigrants mostly inhabit. For the wealthy cattle owners, they view the immigrant farmers as both a nuisance and hindrance to them gaining more land. This leads to the Wyoming Stock Growers Association declaring war on the poor farmers with the state’s blessing. The association quickly assembles an army of mercenaries, whom the U.S. Cavalry supports, to rid the state of these pests. While James Averill’s heart is with the immigrants, he’s unsure they can win the war. 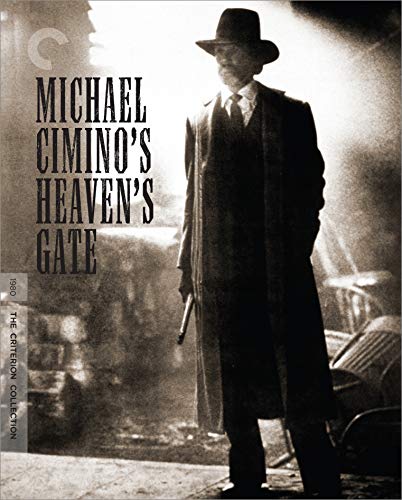 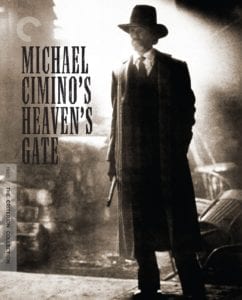 Heaven’s Gate starts out in 1870. Jim Averill and Billy Irvine graduate from Harvard College. The Reverend Doctor gives the new grads parting words on the importance of education and associating a cultivated mind with an uncultivated one. A drunk Billy then gives a speech full of his youthful and irreverent views on life. There is a big celebration afterwards where the male students serenade and women present. Averill’s girlfriend is one of them.

Twenty years pass, and Averill arrives to the boom town of Casper, Wyoming. He’s on his way north to Johnson County where he is now a marshal. The poor European immigrants immigrating there find themselves in a conflict with the wealthy cattle barons known as the Wyoming Stock Growers Association. These starving newcomers are forced to steal their cattle to survive.

Averill’s friend, Nate Champion, is an enforcer for the Association. He kills a settler for rustling one cow, and then intimidates another looking to steal one more. The Association holds a board meeting where Frank Canton, its head, tells members, including the still drunk Irvine, his plan to name and kill 125 settlers, thieves, and anarchists.

After Irvine leaves the meeting, he runs into his old pal Averill, and tells him Canton’s murderous plans. Averill then leaves some biting parting words for Canton on his way out. The two get into a heated argument, and Canton’s keister gets knocked to the floor. However, the confrontation doesn’t dissuade Canton. He still recruits men to kill the named settlers.

Ella Watson is a madam at a bordello in Johnson County. She frequently accepts stolen cattle as payment for the use of her prostitutes. She has a thing for both Averill and Champion and there’s a slight lover’s triangle among them.

John L. Bridges is a local entrepreneur who built an enormous roller skating rink named Heaven’s Gate. There, Averill and Watson skate together for a bit. When a U.S. Army captain gives Averill a copy of the Association’s death list, he reads the names aloud to the settlers. Of course, they are terrified. When a station master and friend of Averill’s named Cully sees the train with Canton’s posse, he rides off to warn the settlers, but the posse kills him as he tries to head out.

Soon, a group of men arrive at Watson’s bordello to rape her. Averill’s there, and he shoots and kills all but one of them. Champion realizes that his bosses want Watson dead too, so he goes to Canton’s camp. He shoots the remaining living rapist dead before refusing to continue on with the killings.

After Canton and his men spot one of Champion’s friends leaving a cabin where Champion and his friend Nick are hiding inside. They raid it, and a gunfight ensues. Watson does her best to save Champion. She rides up in her wagon, and kills one of the hired guns before escaping on horseback herself.

However, Champion and his two friends are killed when Canton’s men set the cabin on fire, and shoot anyone who runs out. Meanwhile, there’s a big meeting at Heaven’s Gate again, and Watson warns the settlers of Canton’s murders. The settlers decide to not take the attacks lying down. They choose to strike first.

Bridges leads the first attack on Canton’s gang. They surround the hired killers, and both sides suffer many casualties. It’s here that Irvine meets his end too, but he’s so drunk, he probably never feels it. Watson and Averill return to Champion’s destroyed cabin. They discover his corpse in the still smoking ashes, along with a handwritten letter documenting his last minutes alive.

The next day, Averill finds himself joining the settlers in an attack against Canton’s men and their fortifications. Both sides take heavy losses until the U.S. Army, with Canton leading them, arrives to stop the fighting. They save the remaining hired killers from their own slaughter.

Afterwards, at Watson’s cabin, Bridges, Watson, and Averill prepare to leave for good. Canton and two others ambush the trio; killing Bridges and Watson. Averill then kills Canton and his men as the conflict’s sole survivor.

Fast forward ten years, and a well-dressed Averill walks the deck of his yacht off Newport, Rhode Island. He goes below to where an attractive, middle-aged woman sleeps. The woman is Averill’s old Harvard girlfriend / wife. Who knows what she is at this point. She wakes, and asks Averill for a cigarette. Silently, he nods and lights it. He then returns to the deck alone.

User Rating: Be the first one !
May 19, 2019
4 minutes read
Show More
Back to top button
Close
Close