Hansel Schmidt, better known as the singer Hedwig, is born male in East Berlin. Hansel falls in love with an American G.I. and undergoes a failed gender reassignment surgery in order to marry him and flee to the West. Unfortunately, the G.I. leaves Hansel, now known as Hedwig, for another man once they are in the United States. Hedwig turns to her love of music and forms a rock band. The film tells Hedwig’s life story through a series of concerts at rundown Bilgewater Inn seafood restaurants. Her tour dates coincide with those of arena-rock star Tommy Gnosis, a wide-eyed boy who once loved Hedwig – but then left with all her songs. 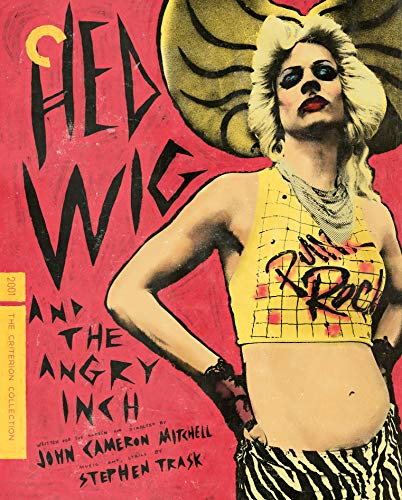 Hedwig and the Angry Inch (The Criterion Collection) [Blu-ray] 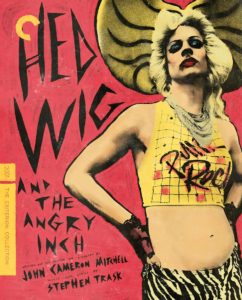 Hansel Schmidt (John Cameron Mitchell), better known as the rock singer Hedwig, leads a ragtag band on a tour around the United States in a series of dive restaurants. Hedwig is gay transexual who was born in East Berlin in the late sixties. Hedwig grew up listening to the music of David Bowie, Lou Reed, and Iggy Pop while under the oppression of Socialist East Germany. Hedwig finds a way out of East Berlin when an American G.I., Sergeant Luther Robinson (Maurice Dean Wint), proposes marriage to Hansel and promises to take him to the West and away from Hansel’s mother (Alberta Watson). However, to do so, Hansel must take on a new identity. Hansel adopts the Hedwig identity and agrees to a genital reassignment surgery. The operation is botched, leaving the Hedwig with a dysfunctional one-inch mound of flesh between her legs, which she refers to as her “angry inch”.

After their marriage, Luther and Hedwig relocate near a military base in Junction City, Kansas. On their first wedding anniversary, Luther leaves Hedwig for another man. Ironically, the same day that Luther leaves the Berlin Wall comes down, allowing East Germans to flood freely into the West, making Hedwig’s physical and emotional sacrifices in vain. After Luther leaves, Hedwig takes jobs, mainly blow, babysitting for many of the army base officers. She also fully embraces her identity as a woman and returns to her love of music by forming a rock band made up of Korean-born Army wives.

During one of his babysitting jobs, Hedwig encounters a shy and misunderstood teenager named Tommy Speck (Michael Pitt). Tommy is discovering his identity and has begun to question his Christian upbringing. Tommy finds himself attracted to Hedwig and her music. The two begin to spend time together and Hedwig gives Tommy an education in music. Tommy joins Hedwig’s band and they begin to have professional success together. Hedwig gives Tommy the stage name of Tommy Gnosis. The couple attempts to take their relationship to a physical level, but when Tommy discovers the Angry Inch, he rejects Hedwig and leaves the band. Tommy forms his own band, claiming authorship of Hedwig’s songs, and becomes a wildly successful rock star.

Years later, Hedwig has formed a new band, now dubbed the Angry Inch. The band is made up of Eastern Europeans including Hedwig’s new husband Yitzhak (Miriam Shor). The band follows Tommy Gnosis’ tour around the country to draw attention to Hedwig’s lawsuit against him for plagiarizing her music. Hedwig’s tour is unglamorous with stays in one-bedroom motels and concerts in dinner theater types of situations. Hedwig tells her life story to the uninterested audience members through a series of flashbacks. Through the flashbacks, Hedwig refers to Aristophanes’ speech in Plato’s Symposium. The myth explains that human beings were once round, two-faced, four-armed, and four-legged beings. Angry gods split these early humans in two, leaving the separated people with a lifelong yearning for their other half.

I had tried singing once back in Berlin. They threw tomatoes. After the show, I had a nice salad. Hedwig

The stress of the tour wears on Hedwig and she begins to lash out at her band and her manager. Yitzhak grows tired of playing a backup singer to Hedwig and looks to branch out on his own. When he is cast in a touring company of Rent, Hedwig tears up his passport so that he cannot leave her. Most of the band abandons her after the incident. Hedwig turns to working as a prostitute which brings her into an encounter with Tommy who picks her up off the street. The two former lovers reconcile. However, the reunited couple is involved in a car accident together. The accident is picked up by the media, and the paparazzi swarm onto the story, bringing notoriety and fame to Hedwig while destroying Tommy’s career.

After the surge in popularity, Hedwig reunites with her band to perform one more time. During the performance, Hedwig removes her drag, finally accepting her dual identity. The film then skips into a non-real space. Hedwig, in her male form, discovers herself alone in front of Tommy on a huge stage. Tommy sings directly to Hedwig, pleading for forgiveness and saying goodbye. Hedwig realizes that she created her “other half” from within herself. Hedwig returns to the concert, but this time, the venue seems transformed with the band members all dressed in white.

Hedwig allows Yitzhak to become who he wants to be by giving him Hedwig’s blonde wig. Yitzhak transforms into his drag persona. The song is followed by a brief animated sequence that shows the two separated halves from the Symposium finally uniting. The final shot shows Hedwig, now with a tattoo of the united halves on her hip, walking naked down a dark alley, symbolizing that Hedwig’s two halves are now one.