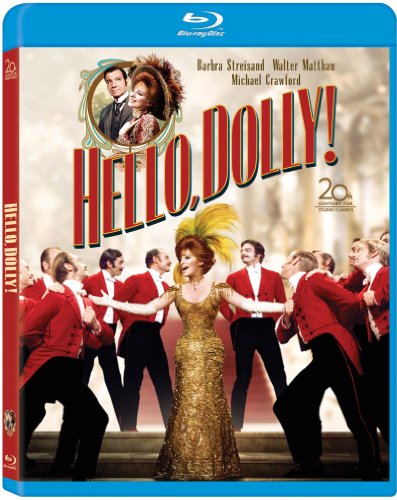 20th Century Fox Home Entertainment will release the classic musical Hello, Dolly! onto Blu-ray this Spring. The film is directed by Gene Kelly and stars Barbra Streisand, Walter Matthau, Michael Crawford, Marianne McAndrew, and Danny Lockin. Hello, Dolly! will be available for purchase online and in stores across the nation on April 2.

In the film, it’s turn-of-the-century Yonkers, New York, where an ambitious young widow with a penchant for matchmaking (Streisand), has an idea for the perfect match-tight-fisted, local merchant Horace Vandergelder (Matthau) and-herself! As she tries to win his heart, we’re treated to one of the most musically entertaining, hilariously underhanded plots in film history. Directed by Kelly, this Oscar winner for Best Sound, Music, Score and Art Direction/Set Decoration is among the world’s most cherished films.

Hello, Dolly! was released in December of 1969 and grossed over $9 million at the box office.

The Blu-ray will include several special features, including: a 1969 featurette and Directing Dolly: Gene Kelly Remembered featurette.

Disclaimer: Affiliate links are contained in this post. This means when you click a link, and purchase an item, Movie House Memories will receive an affiliate commission. Advertisers and Affiliate Partnerships do not influence our content. See our Terms of Use about the inclusion of affiliate links on this site for more information.
February 24, 2013
1 minute read
Show More
Back to top button
Close
Close