In the first film of the legendary horror franchise, narcissist Frank Cotton seeks the pleasures and experiences that man was not meant to experience. What he finds are the Cenobites, demons from another dimension who seek carnal experiences but can no longer tell the difference between pain and pleasure. However, Frank escapes from their dimension after the Cenobites tear his soul apart. Now, Frank tries to rebuild his body by killing living beings and sucking their life force out of them. Who is next on his list, but his own brother and niece. 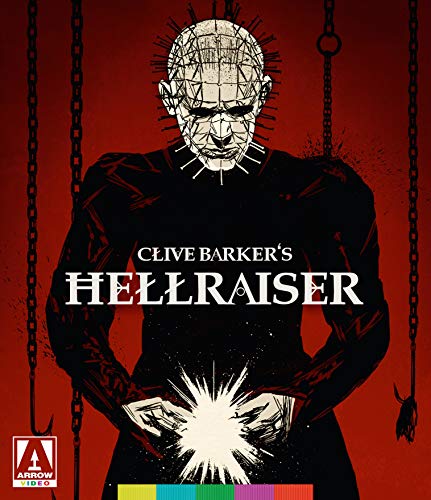 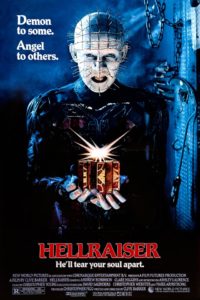 In Morocco, narcissist Frank Cotton (Sean Chapman) buys a mysterious square puzzle box from a dealer. Once alone in his attic at home, Frank attempts to open the box. When he does, hooked chains begin emerging from around the room and tear his body apart. A mysterious, black-robed figure is shown moving around the room with the remnants of Frank’s body. The figure picks up the box and returns it to its original state which restores the room to its original shape minus Frank.

Sometime later, Frank’s much nicer brother Larry (Andrew Robinson) moves into the house to help repair his damaged relationship with his second wife, Julia (Clare Higgins). Julia had an affair with Frank shortly before her marriage, a fact that has driven a wedge in between Larry and Julia. Larry’s teenage daughter from his first marriage, Kirsty (Ashley Laurence), chooses not to live with them while they work on their marriage and lives someplace else. One day in the house, Larry cuts his hand while carrying a mattress up the stairs and accidentally lets blood drop on the attic floor. The blood resurrects Frank as a skinless corpse.

Not long afterwards, Julia finds Frank in the attic. Instead of alerting Larry, she agrees to bring random people back to the house for Frank to drain so that he can restore himself to his former glory. Frank promises Julia that if she does this, he will run away with her. Still obsessed with her former lover, Julia begins bringing random men home from the bars while Larry is away and mortally wounding them so that Frank can drain their life essence from them. Frank explains to Julia that he had exhausted all sensory experiences in the world and sought out the puzzle box. He was promised that it would open a portal to a realm of new carnal pleasure. However, once the box was opened, demons known as Cenobites emerged and subjected him to the extremes of sadomasochism.

One night, Kirsty sees Julia bringing a man to the house. She follows the pair into the attic and interrupts Frank’s feeding. Frank attacks her, but Kirsty escapes by throwing the puzzle box out the window, distracting Frank. Once outside, Kirsty retrieves the box and flees, but she collapses shortly afterwards. Kirsty wakes sometimes later in a hospital. She immediately works on solving the puzzle box. Once she solves it, the Cenobites and a monster called the Engineer appear. She escapes the Engineer but is confronted by the lead Cenobite, Pinhead (Doug Bradley).

Kirsty returns to her father’s house. She is unaware that Frank has killed Larry and taken over his identity by stealing his skin. Julia tries to convince Kirsty by showing her the flayed corpse in the attic. Once there, Julia locks Kirsty in. The Cenobites reappear and are not fooled by the deception. They demand the man who killed the body in the attic. Kirsty tries to escape but is held by Julia and Frank. Frank finally reveals his true identity to Kirsty and makes sexual advances towards his niece. She rejects him, and he decides to kill her instead to complete his rejuvenation. In his haste, he stabs Julia instead and drains her. Frank chases Kirsty to the attic and tries to kill her there. The Cenobites appear after he confesses to killing her father. With the confession, the Cenobites trap Frank in their chains and tear him apart for a second time.

Once Frank is dispatched, the Cenobites turn on Kirsty. They decide not to give Kirsty her freedom. Kirsty grabs the puzzle box from his dead stepmother’s hands and banishes the Cenobites by reversing the motions needed to open the puzzle box. Kirsty’s boyfriend arrives and takes Kirsty out of the house just before it collapses. Afterwards, Kirsty throws the puzzle box into a fire. A vagrant who has been stalking Kirsty walks into the fire and retrieves the box before transforming into a winged skeleton creature and flies away. The box returns to the merchant who sold it to Frank at the beginning of the movie.