A train pulls into the station – it’s the end of the line. A hobo jumps from a freight car hoping for a fresh start in a new city. Instead, he finds himself trapped in an urban hell. This is a world where criminals rule the streets and Drake, the city’s crime boss, reigns supreme alongside his sadistic murderous sons, Slick & Ivan. Amidst the chaos, the hobo comes across a pawn shop window displaying a secondhand lawn mower. He dreams of making the city a beautiful place and starting a new life for himself. But as the brutality continues to rage around him, he notices a shotgun hanging above the lawn mower… Quickly, he realizes the only way to make a difference in this town is with that gun in his hand and two shells in its chamber… (Courtesy Magnet Releasing) 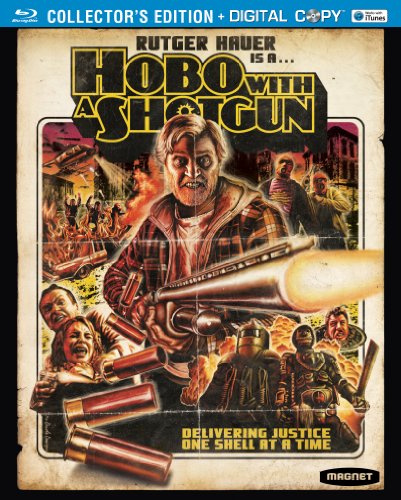 ‘Hobo with a Shotgun’ Movie Summary 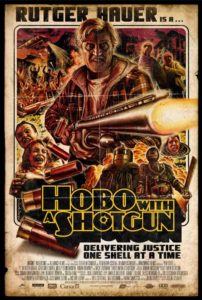 When a hobo (Rutger Hauer) arrives in a boxcar to the city of Hope Town, he finds a crime lord named The Drake (Brian Downey) brutally runs the place with his two sons, Ivan (Nick Bateman) and Slick (Gregory Smith). He learns this when the three show up and publicly decapitate The Drake’s younger brother, Logan (Robb Wells) with a barbed-wire noose for being a traitor.

The Hobo then makes his way to a pawn shop where he spots a lawnmower in the window for $49.99 and decides to buy it so he can start a business. Unfortunately, he’s short $49.99, and he tires to beg for change on a sidewalk outside The Drake’s nightclub. When a group of punks drag another homeless man inside it, The Hobo sneaks in to get a better look.

Inside, Ivan, Slick, and their goons harass and kill people. Slick goes after a kid named Otis (Drew O’Hara), who owes him money as Ivan snaps his arm in half. A local prostitute named Abby (Molly Dunsworth) is there looking for Johns or something and she steps up to defend Otis. Slick takes her outside the club to either have sex with her or kill her… it’s not clear, but The Hobo shows up to save her regardless. He knocks Slick out cold before dragging him to the police station under citizen’s arrest.

However, he quickly learns the Chief of Police (Jeremy Akerman) is as corrupt as the day is long. He lets Ivan and Slick into his interrogation room where they carve the word SCUM into his chest before tossing him outside into a dumpster. He stumbles out of it where he meets Abby turning a trick with an off-duty cop (David Brunt). After saving her twice in one night, she takes The Hobo home to recover (his chest wound is forgotten by the next morning).

That morning, The Hobo comes across a filmmaker (Pasha Ebrahimi) for Bumfights who gives homeless people money to degrade themselves in front of his camera. The filmmaker makes The Hobo break a glass bottle over his head and chew the glass shards, but he makes enough money to buy that lawnmower. So he has that going for him, which is nice.

Once he gets to the pawn shop, three robbers show up, guns blazing, and hold a woman and her baby hostage while they demand all the clerk’s money from the register. The Hobo grabs a shotgun from a shelf and kills the robbers. He then buys the shotgun (which oddly costs the same as the lawnmower), and heads out to begin killing Hope Town’s criminals. He starts off with shooting the filmmaker; then a pimp (Duane Patterson), a coke lord (Mark Owen), and a pedophile who dresses as Santa Claus (Brian Jamieson).

These killings piss The Drake off and he tells his boys to make the town fear them. They burn a school bus filled with children—killing them all—because they are friendly to the homeless or something vague. They then enter a live broadcast at the local television station and kill the anchorman (George Stroumboulopoulos) because he was rooting for The Hobo. The Drake gets on the TV and demands the town’s citizens kill all the homeless or he will kill their children. Something along the lines of The Purge breaks out across town.

As this is going on Abby walks home from a hard night at work. The off-duty cop is now on duty and he stops her and attempts to rape her. The Hobo shows up and kills him before a mob approaches them. Abby smuggles The Hobo in a shopping cart past them and takes him home. However, Otis spots them arrive from a phone booth outside her complex and calls Ivan and Slick.

Inside Abby’s apartment, The Hobo tells Abby of his dream to start a lawn mowing business. She likes the idea and the two decide to skip town and start that business someplace safer. As they pack (or really Abby does—the homeless guy is always packed), the brothers show up. Slick attacks Abby in her bedroom—taking a hacksaw to her throat—while Ivan and The Hobo duke it out in her living room. After The Hobo electrocutes Ivan unconscious, he saves Abby. He duct tapes his shotgun to Slick’s dick and takes him outside. Ivan, awake again, tries to intervene, but The Hobo makes him leave.

The Hobo then shoots Slick in the groin to avenge Logan and all those kids Slick burned to death in the bus. As he takes Abby to the hospital, the burnt school bus pulls up to take the dying Slick straight to Hell while Slick’s on the phone with The Drake to say goodbye.

With The Drake’s favorite son dead, he summons The Plague—two armor-clad demons named Rip (Nick Bateman) and Grinder (Peter Simas) to bring The Hobo to him. After the doctors at the hospital stitch Abby up and she’s safe, The Hobo visits the maternity ward to give a rambling speech about how they will turn out to be prostitutes, junkies, or worse…a drunk just like him. As this goes on, The Plague arrive and attack Abby. When The Hobo shows up to save her, they capture him and take him to The Drake for a public beheading.

Back at the hospital, Abby seems to have fully recovered from nearly having her head sawed off with the hacksaw. She heads over to the pawn shop for weapons. She attaches an axe to The Hobo’s shotgun and makes the base of the lawnmower into a hand-cutting shield thing.

When she arrives, she finds The Hobo helpless in a Glory Hole with a large crowd above cheering The Drake on. She confronts The Drake with Ivan as her hostage, but The Drake shoots Ivan as he’s a disappointment. The Plague attack Abby and she kills Grinder with the lawnmower shield thing. The Drake gets a hold of Abby and shoves her hand into that lawnmower shield thing, shredding her left hand to the bone. She pulls out a knife with her other hand and repeatedly stabs him, but he’s not dead. She then pulls The Hobo out of the Glory Hole by his hair and unties him. Rip tells Abby she must now take Grinder’s place in The Plague, but the Hobo drives him off with some flames from the gas pouring out of the lawnmower engine before that can happen.

The Hobo tells The Drake he will be riding shotgun on their upcoming trip to Hell before shooting him in the head and killing him. The corrupt cops shoot The Hobo and kill him. The townsfolk shoot the corrupt cops and kill them.

Abby lives to fight another day where she may or may not join The Plague for a happy ending.