Max Mercer is a mischievous and resourceful young boy who has been left behind while his family is in Japan for the holidays. So when a married couple attempting to retrieve a priceless heirloom sets their sights on the Mercer family’s home, it is up to Max to protect it from the trespassers, and he will do whatever it takes to keep them out. Hilarious hijinks of epic proportions ensue, but despite the absolute chaos, Max comes to realize that there really is no place like home sweet home. (Courtesy of 20th Century Studios) 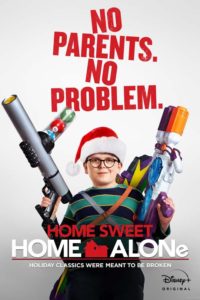 Jeff and Pam McKenzie (Rob Delaney and Ellie Kemper) are a married couple experiencing financial difficulties. Jeff is out of work and Pam’s salary is insufficient to afford the mortgage by itself. Even worse, they have not told their children, Abby (Katie Beth) and Chris (Max Ivutin), that they are selling the family home. During an open house, the McKenzies are visited by Max Mercer (Archie Yates) and his mother Carol (Aisling Bea), who are not interested in the house, but rather are looking for a bathroom for Max to use. Max and Jeff have a conversation about some of Jeff’s old antique dolls. One of the dolls has a malformed upside-down face, which Max notes.

Jeff is somewhat rude to the opinionated Max and refuses Max’s request for a drink of soda, but the young boy soon leaves with his busy mother. Before leaving, Carol comments on how some dolls with deformities tend to sell at high prices on the secondary market due to their rarity. Not long after, Jeff sees an antique show that has another upside-down faced doll that sells for $200,000. Jeff sees the doll as the opportunity to save the family home and goes to retrieve it, but finds it missing. Jeff suspects that Max stole the doll and makes plans to find Max’s home based on his name.

Meanwhile, Carol and Max return to their home. Max’s family is preparing to leave for Tokyo, Japan for the Christmas holiday. Carol is leaving earlier than the rest of the family for business. Max is annoyed with the chaos in his home and argues with his mother. He finds refuge and quiet by hiding in the car parked in the garage. He falls asleep and ends up spending the night in the car. The next day, Max’s family is leaving the house in a hurry. In the bedlam, Max is left behind. Jeff shows up during the rush to leave and learns the security code for the house and the location of the hidden house key. Jeff returns home and discusses the situation with Pam. Initially Pam is against the idea of breaking into the Mercer house, but ultimately agrees to break into the house to steal back the doll when she realizes that the money from the sale of the doll would save their house.

Uhhh! This is garbage. I don’t know why they are always trying to remake the classics. Never as good as the originals. Hunter (Tim Simons)

However, Jeff and Pam’s efforts are complicated by the arrival of Jeff’s obnoxious and more successful brother, Hunter (Tim Simons), Hunter’s fashionista wife, Mei (Ally Maki), and their son Ollie (Aiden and Allan Wang). Hunter is staying with Jeff and Pam for Christmas and provides lavish gifts for everyone in the family which further frustrates Jeff. Abby and Chris also begin to suspect something is going on with their parents although they remain clueless that their home is for sale despite the constant presence of realtor Gavin Washington (Kenan Thompson).

Back at the Mercer home, Max awakens to find that everyone has left for Tokyo without him. He takes advantage of his temporary solo life by eating meals heavy in sweets and engaging in various mischievous activities. However, he soon becomes bored and lonely and wishes for his family to return home again. That night, Jeff and Pam arrive at Max’s house and get inside using the alarm code and the hidden key. Max overhears the couple talking about taking the “ugly little boy” and selling him to the “old lady.” Max mistakenly believes that they are referring to him and not the doll. Max decides to defend his house and calls the police. Officer Buzz McCallister (Devin Ratray), Kevin McCallister’s (Macaulay Culkin) older brother from the first two Home Alone films, responds to the scene. Pam manages to distract McCallister and convinces him that she and Jeff live at the Mercer house. McCallister leaves without arresting them. At the same time, Max realizes that if the police find out he is home alone that his parents might get arrested.

Meanwhile, Carol discovers that Max has been left at home when the rest of her family arrives in Tokyo. She immediately buys a ticket to fly back to Chicago. At the same time, the McKenzies go to church with Hunter and his family. Gavin informs them that they have a buyer for the house, but they need to decide by the end of the year whether they will accept the offer. The potential buyer puts additional pressure on Pam and Jeff to get the doll. Max is also at the church and has a conversation with Chris. Chris is sympathetic to Max after hearing that his parents left him home alone and gives him his nerf gun. Jeff and Pam see Max at the church talking to an elderly church parishioner and assume that she is his grandmother. Jeff and Pam decide to break into the house once again while Max and his “grandmother” are at the church. They leave their kids with Hunter and his family and rush back over to Max’s house.

Jeff and Pam attempt to sneak in through the back of the house, but inadvertently enter the house of an African American family by mistake. While attempting to leave, they fall into a frozen over swimming pool. The commotion draws the attention of Max who has returned home. Max overhears the wet couple plotting to enter the house again, this time with Jeff dressed as Santa Clause. Max sets traps in and around the house while Jeff and Pam wait for their family to fall asleep on Christmas Eve so they can commit their burglary.

That night, Jeff and Pam attempt to break into the house. Max uses an air launcher to shoot billiard balls at Jeff. He uses soda bottles filled with Mentos to create plastic missiles to shoot at Pam. Eventually, Max, Jeff, and Pam get into a standoff. Max reveals that he is sad that he has been left alone which Jeff and Pam sympathize with him about. The married couple also learns that Max did not steal the doll, just a can of soda. Jeff and Pam agree to have Max stay with them until his mother returns.

Once back at the McKenzie’s house, Jeff and Pam explain the entire situation to their family. Ollie reveals that he has the doll and throws it into the air. Max manages to save the ceramic doll before it can break, endearing him even further to Jeff and Pam. With the doll safely in their possession, Jeff and Pam are ensured that they can keep their home. Carol arrives and is relieved to find Max safe. Max and Carol apologize to one another for treating each other so badly. Carol explains to Jeff and Pam that since they only moved into their house two months prior, they have not made any friends in the neighborhood and thanks them for taking Max in. However, Carol is not pleased to see what Max, Jeff, and Pam did to her house upon returning home.

One year later, the Mercers and the McKenzies are enjoying a Christmas dinner together at the McKenzie house. Jeff has gotten a new, well-paying job. The McKenzie’s home was saved, and Jeff finally shares a soda with Max.