Drac and the Pack are back, like you’ve never seen them before in Hotel Transylvania: Transformania. Reunite with your favorite monsters for an all-new adventure that presents Drac with his most terrifying task yet. When Van Helsing’s mysterious invention, the ‘Monsterification Ray,’ goes haywire, Drac and his monster pals are all transformed into humans, and Johnny becomes a monster! In their new mismatched bodies, Drac, stripped of his powers, and an exuberant Johnny, loving life as a monster, must team up and race across the globe to find a cure before it’s too late, and before they drive each other crazy. With help from Mavis and the hilariously human Drac Pack, the heat is on to find a way to switch themselves back before their transformations become permanent. (Courtesy of Sony Pictures) 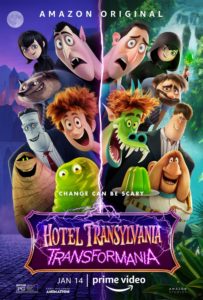 When Dracula (Brian Hull) throws a celebration for the 125th anniversary of his Hotel Transylvania, his daughter, Mavis (Selena Gomez) overhears him tell his wife, Ericka Van Helsing (Kathryn Hahn) he plans to retire and leave the hotel to her and her husband, Johnny (Andy Samberg)—whom Dracula has never really accepted as part of the family because he’s so annoying.

When Mavis tells Johnny the news, he can barely contain himself and he runs to Dracula to tell him about his wild plans to renovate the hotel. This freaks Dracula out and he panics. He lies to Johnny and says that a real-estate law is on the books that only allows monsters to own the hotel. Disappointed, Johnny decides to become a monster right then and there.

Ericka’s great-grandfather, Professor Abraham Van Helsing (Jim Gaffigan), lives in the hotel’s basement and he invented a device called the Monsterfication Ray which turns people into monsters and monsters into people. He decides to help Johnny and after testing the ray on his guinea pig, Gigi, he uses it on Johnny—who then turns into a green dragon.

When Dracula learns Johnny is now a monster, he tries to turn him back to normal. Unfortunately, his shot with the ray is as accurate as a Stormtrooper and he misses every time he shoots it. Eventually he manages to turn himself into a human and break the ray’s crystal. Van Helsing tells Dracula and Johnny that to fix the ray and turn themselves back to normal, they need to get a new crystal from a very dangerous cave in South America. So, off the boys go without telling Ericka or Mavis the rhyme or reason they are leaving.

Meanwhile, Dracula’s friends Frank (Brad Abrell), Wayne (Steve Buscemi), Griffin (David Spade), and Murray (Keegan-Michael Key) find themselves transformed into humans after drinking from a fountain the ray contaminated. It seems one of Dracula’s wild shots hit the ice sculpture of him that was positioned above the fountain and then melted into it.

Mavis and Ericka know something’s up, but don’t know what it is. They go find Van Helsing after they see a news story from South America with a crazy man that looks like Dracula being saved by a dragon that looks like Johnny. By now, Van Helsing has seen the side effects the ray has caused on Gigi and he warns them that people who become monsters continue to mutate and become more hostile as time goes on. Mavis is now worried for her husband’s wellbeing and the girls take the rest of the gang to South America to find Dracula, Johnny, and the crystal before it’s too late.

As Dracula and Johnny traverse the jungle, the boys bond to the point Dracula feels guilt for lying to Johnny about the real-estate law. Before he comes clean to Johnny, the girls and the gang arrive. They confront Dracula who admits he panicked and lied about giving the hotel to Mavis and Johnny. Johnny is beyond upset because he believes Dracula doesn’t consider him aa member of the family. His anger causes him to mutate into a larger and more unstable dragon and he runs off into the jungle.

Mavis runs after Johnny while Ericka, Dracula and the rest of the gang set out to get a new crystal. Mavis finds Johnny, but he’s now blind with rage. Eventually, she leads him to the cave after Ericka and Dracula locate it. Eventually they do find the crystal, but Johnny is even more unstable and he stands outside the cave banging on its walls, causing much destruction inside.

Mavis grabs the replacement crystal and fixes the ray. She then runs to Johnny and uses it on him, but nothing happens because he’s still too angry to go back to normal. Dracula goes to him and Johnny grabs him in anger. Before he can roast Dracula to death, Dracula uses a marshmallow analogy from the point earlier in the film where the boys bonded to tell Johnny how wrong he was and Johnny is truly part of the family. This revelation brings Johnny back to his senses and he returns to his annoying human form.

On the way back to Hotel Transylvania, Mavis uses the ray to transform Dracula and his friends back to normal—much to Frank’s dismay. However, once they get home, they find a monster-sized Gigi has nibbled the hotel to pieces. Dracula turns Gigi back to an innocent guinea pig and then mourns the loss of the hotel… and he hands the ruins of the hotel over to Mavis and Johnny so they may rebuild it as they wish.

One year later and the two reveal the rebuilt Hotel Transylvania to Dracula—which is not how he would have done it—but it’s what his daughter and son-in-law wanted, and that’s all that matters to him now.