In the Ninth Century, during the reign of the Tang dynasty in China, there exists a secret organization called The House of Flying Daggers. It exists to oppose the current government, and steals from the rich to give to the poor. When two captains of the government army, Leo and Jin, investigate a young dancer named Mei for her ties to the Flying Daggers, they decide to use her to get close to the organization’s leaders. Leo arrests Mei, only to have Jin break her free. Things are complicated more when both men reveal their love for Mei, and it leads them to tragedy. 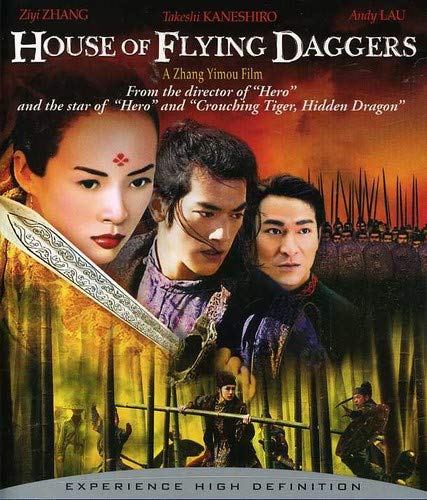 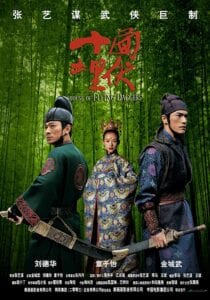 While Jin is frolicking through the woods seducing Mei, policemen who grow increasingly aggressive attack them. In one melee, Jin is wounded by one of the officers who does not recognize him. Jin learns from Leo that a big-time general has become involved in the operation. The general has no respect for the life of his own men and wanted blood spilled in order to assure Mei that Jin is the real deal. The general’s men don’t know that Jin is undercover. His efforts to kill him and Mei grow increasingly deadly, until finally they’re surrounded by the general’s men in a bamboo forest and are saved by the flying daggers of the Flying Daggers.

Leo and Mei are old lovers. But Mei is all business. She refuses to rekindle her love with Leo. When Leo realizes that Mei is in love with that no-good playboy Jin, he tries to rape her. But he’s stopped when the new leader of the Flying Daggers puts a knife in his back and tells him to stop getting busy and to get busy luring the general into their trap.

Mei is ordered to take Jin out and kill him. She kills him. Well, sort of. She actually makes love to him in a meadow and lets him go. Jin pleads with Mei to go with him, but Mei refuses. She’s loyal to the Flying Daggers and won’t desert. They part, but Mei soon regrets it. As she comes back for Jin, Jin likewise regrets his choice and returns to be with Mei. As Mei returns to the field to find Jin, a dagger strikes her, planting deep near her heart, driving her unconscious. It was Leo’s dagger. He couldn’t stand her being with Jin and would kill her first.

Jin returns and finds trouble with the distraught Leo. They fight over Mei and come to a bloody standstill as snow covers the forest around them. The snow wakes Mei as Leo pulls the dagger from his back and threatens to throw it at Jin. They all know that one throw of the dagger would be impossible to defeat. Mei threatens to pull the dagger from her chest to kill Leo if he throws his dagger at Jin. Leo only flicks his knife at Jin, but Mei takes the bait. She throws the dagger from her chest perfectly. But instead of killing Leo, she saved Jin. But Leo didn’t throw his dagger, and her perfect throw only deflects a single drop of blood flying toward Jin.

Jin runs to Mei as the last of Mei’s life bleeds through the knife wound, and weeps. Leo staggers away in the snow, perhaps dying himself. And the film closes with Jin singing to Mei a song about a rare Chinese beauty, whose beauty was such that cities and kingdoms fell by her look.