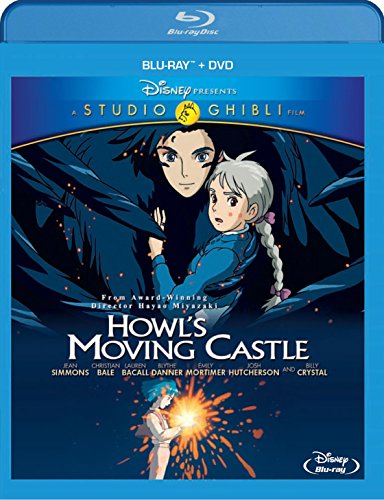 Walt Disney Home Entertainment has revealed its plans to bring Studio Ghibli’s animated film Howl’s Moving Castle to Blu-ray. The film was written and directed by Hayao Miyazaki and is based on the novel by Diana Wynne Jones. The English language version of the film features the voice talents of Christian Bale, Lauren Bacall, Jean Simmons, Blythe Danner, and Emily Mortimer. Howl’s Moving Castle will be available online and in stores beginning on May 21, 2013.

In the film , a simple young girl called Sophie is put under a curse by the evil Witch Of The Waste, transforming her into an ugly old woman. Ashamed of her appearance, Sophie deserts her hat shop and heads into the hills in search of a cure. She comes across the strange, yet awesome Moving Castle, the abode of the much-feared magician, Howl. Inside the castle, Sophie befriends the fire demon Calcifer, who can see through the spell and offers to help her return to her natural form. For his efforts, however, Sophie must help Calcifer break the contract he has with Howl, the details of which he is forbidden to explain. So Sophie assumes the position of the castle’s cleaning lady and gets close to the young, handsome Howl, who takes a fancy to the young Sophie, whom he can also see behind her withered facade.

Howl’s Moving Castle was released in the United States in June of 2005. The film grossed a little over $4 million in the U.S., but grossed over $235 million in worldwide box office.

Walt Disney Home Entertainment has not released any details concerning the exact technical specs and special features that will be included with the disc.

Disclaimer: Affiliate links are contained in this post. This means when you click a link, and purchase an item, Movie House Memories will receive an affiliate commission. Advertisers and Affiliate Partnerships do not influence our content. See our Terms of Use about the inclusion of affiliate links on this site for more information.
March 8, 2013
529 1 minute read
Show More
Subscribe
Login
0 Comments
Inline Feedbacks
View all comments
Most Recent Posts
Facebook Twitter LinkedIn Tumblr Pinterest Reddit
Back to top button
Close
wpDiscuz
0
0
Would love your thoughts, please comment.x
()
x
| Reply
Close