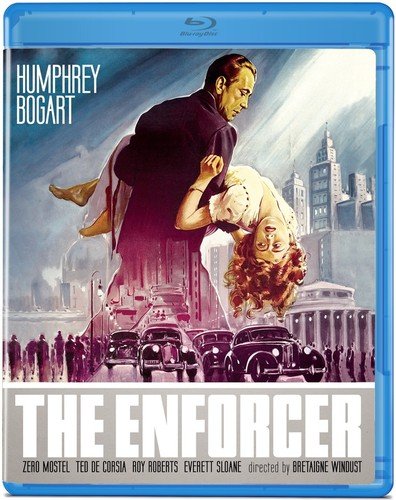 Olive Films has announced that they are adding The Enforcer (1951) to their April line-up of Blu-ray releases. The film is directed by Bretaigne Windust and written by Martin Rackin. The Enforcer starred Humphrey Bogart, Zero Mostel, Ted de Corsia, Everett Sloane, and Roy Roberts. The crime drama will make its debut on Blu-ray online and in stores beginning April 30th.

Bogie is a hard-hitting D.A. facing the hottest case of the year. Armed with a killer’s confession, a score of missing persons and a mob undertaker working full-time, he knows he’s onto something. Relentless and determined, he tracks down a notorious murder-for-profit ring, headed by a killer named Mendoza. With Mendoza in jail, Bogart’s work has just begun. His single eyewitness, a henchman turned stool pigeon, plunges to his death in a desperate attempt to avoid testifying on the night before the trial. He has twelve hours and one last chance to bring this killer to justice… and Bogart’s going to take it!

The Enforcer was released in February of 1951 and was the film that Bogie made right before making The African Queen.