Hunger follows life in the Maze Prison, Northern Ireland with an interpretation of the highly emotive events surrounding the 1981 IRA Hunger Strike, led by Bobby Sands. With an epic eye for detail, the film provides a timely exploration of what happens when body and mind are pushed to the uttermost limit. 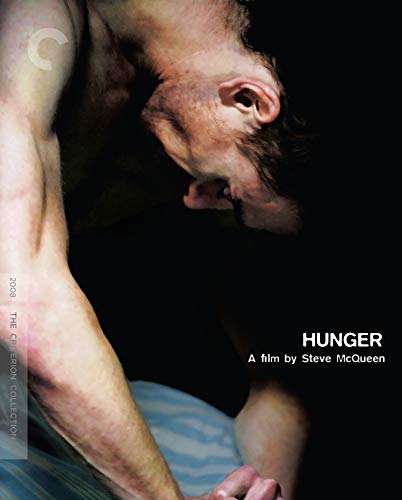 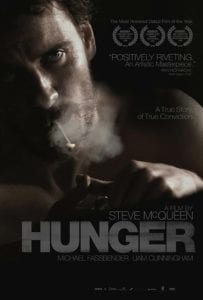 Raymond Lohan (Stuart Graham) is a guard in Maze Prison in Northern Ireland in the 1980’s. He is an isolated man who does not associate or talk to his fellow guards. His daily routine includes checking his car for bombs and cleaning the blood off his knuckles.

One day, a new IRA prisoner arrives at the prison. The prisoner, Davey Gillen (Brian Milligan), refuses to wear the prison uniform so he is classified as a non-conforming prisoner. He is sent to his cell naked with only a blanket and assigned to a cell with Gerry Campbell (Liam McMahon). Campbell is also a non-conforming prisoner who has smeared the walls of his cell with his own feces, as part of the prisoners’ “no-wash” protest. Gillen appears to be dismayed of his situation having been sentenced to prison for six years, but Campbell kindly welcomes him. They, along with many of the prisoners, work to pollute the prison whenever the can, including funneling their urine outside of their cells onto the main corridor. They learn to sneak things in and out of the prison, with Campbell’s girlfriend (Karren Hassan) sneaking a radio in by placing it into her vagina and Gillen’s girlfriend sneaking a note out after it is passed to her during a kiss.

The prison grows weary of the anti-hygiene protest of the prisoners and violently removes them from their cells. The men are beaten and pinned down so that the guards can cut their hair and shave their beards, which have each grown long from the “no-wash” protest. The prisoners resist, with one prisoner, Bobby Sands (Michael Fassbender), spitting into the face of Lohan. Lohan responds by punching Sands in the face, but when he swings a second time, he punches a wall. The guards violently cut Sands’ beard and hair and throw him into a bathtub to clean him up. A nearly unconscious Sands is taken back to his cell by the guards when they are done with him. Lohan smokes his cigarette alone with his knuckles bleeding, as before. Campbell and Gillen’s cell is washed to remove the feces while they are out of the room.

Sometime later, Sands meets with his parents (Des McAleer and Helen Madden) during visitation, who are concerned by his appearance. Shortly afterwards, the prisoners are provided second-hand civilian clothing by the guards. Sands has received a secret note from the IRA leadership telling him to accept the clothes and to negotiate with the prison for better terms. Sands tears up the clothes and trashes his cell, causing the other prisoners to do the same. In response, the riot police are brought in. They line up against the prison halls and beat their shields with their batons to frighten the prisoners into compliance. The prisoners are then pulled out of their cells one at a time and forced to run the gauntlet of the hallway, beaten by the batons from the riot squad as they go. The prison guards then forcibly examine each prisoner for contraband, having their anuses and mouths pried open. One prison head-butts a guard and brutally beaten by a riot officer.

One day, Lohan goes to a retirement home to visit his mother (Helena Bereen), who is catatonic. A member of the NRA enters the room from behind Lohan and shoots him in the back of the head, killing him. Lohan dies with his head in his mother’s lap.

A short time later, Sands is approached by Father Dominic Moran (Liam Cunningham) who wishes to discuss the morality of a hunger strike. Moran tells him that the IRA leadership believes that the protests in the prison are becoming a distraction from the IRA’s main mission. The leadership want Sands to negotiate and stop resisting. Sands tells the priest of an incident where he encountered a foal with a broken leg by a stream. Sands killed the animal, believing that putting the wounded beast out of its misery was the right thing to do. Sands tells Moran that he knows what he is doing with the hunger strike, and what it will do to him, but he will not stand by and do nothing. Sands is willing to sacrifice both his life and the lives of the other prisoners to make a point.

The rest of the films shows Sands’ slow decline from the hunger strike. He begins to develop weeping sores all over his body and his kidneys and pancreas begin to fail. He suffers from low blood pressure and stomach ulcers. Sands becomes so weak that he loses the ability to stand on his own. He frequently sees visions of his younger self (Ciaran Flynn) as a child. However, Sands remains defiant to the very end. Sands’ parents stay with him during his final days. He eventually passes away on day 66 of the strike, with his mother by his side.

In the post script to the film, it is revealed that Sands was elected to the United Kingdom Parliament as M.P. for Fermanagh and South Tyrone while he was on his hunger strike and imprisoned. Additionally, nine other men died with him during the seven-month hungers strike before it was called off. Sixteen prison officers were killed by paramilitaries throughout the various protests depicted in the film. Finally, the British government conceded to the prisoners’ demands despite never officially granting political status.