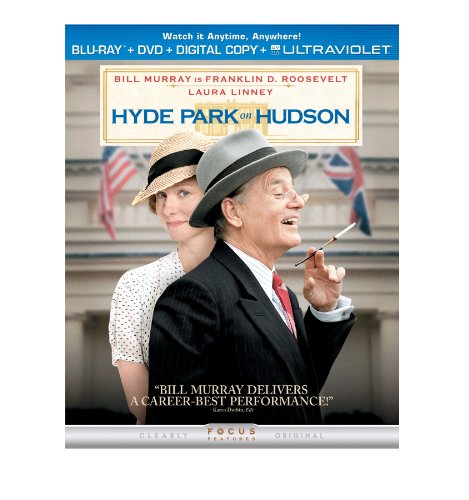 Universal Studios Home Entertainment has announced the Blu-ray/DVD/UltraViolet Combo Pack release of Hyde Park On Hudson this April. The film, which is directed by Roger Michell and stars Bill Murray, Laura Linney, Samuel West, and Olivia Williams, will be available everywhere on April 9, 2013.

In the film, as Great Britain faces an imminent war with Germany, President Roosevelt (Murray) and his wife, Eleanor (Williams), invite the King and Queen of England for a weekend at their home in upstate New York.  But during the first-ever visit of a reigning British monarch to America, international affairs must be juggled with the complexities of FDR’s domestic establishment, as wife, mother and mistresses all conspire to make the royal trip an unforgettable one.  Hyde Park On Hudson is a charming and fresh look at true events and the mysteries of love and friendship, from the acclaimed director of Notting Hill.

Hyde Park On Hudson was released in December of 2012 and has grossed over $8 million at the box office to date.  Murray was nominated for Best Actor In A Motion Picture – Comedy or Musical at this year’s Golden Globe Awards.