Based on Guillaume Laurant’s novel Happy Hand, I Lost My Body begins in a Parisian laboratory, where a severed hand escapes its unhappy fate, and sets out to reconnect with its body. During a hair-raising escapade across the city, the appendage fends off pigeons and rats alike to reunite with pizza boy Naoufel. Its memories of Naoufel and his love for librarian Gabrielle may provide answers about what caused the hand’s separation, and a poetic backdrop for a possible reunion between the three.

‘I Lost My Body’ Movie Summary 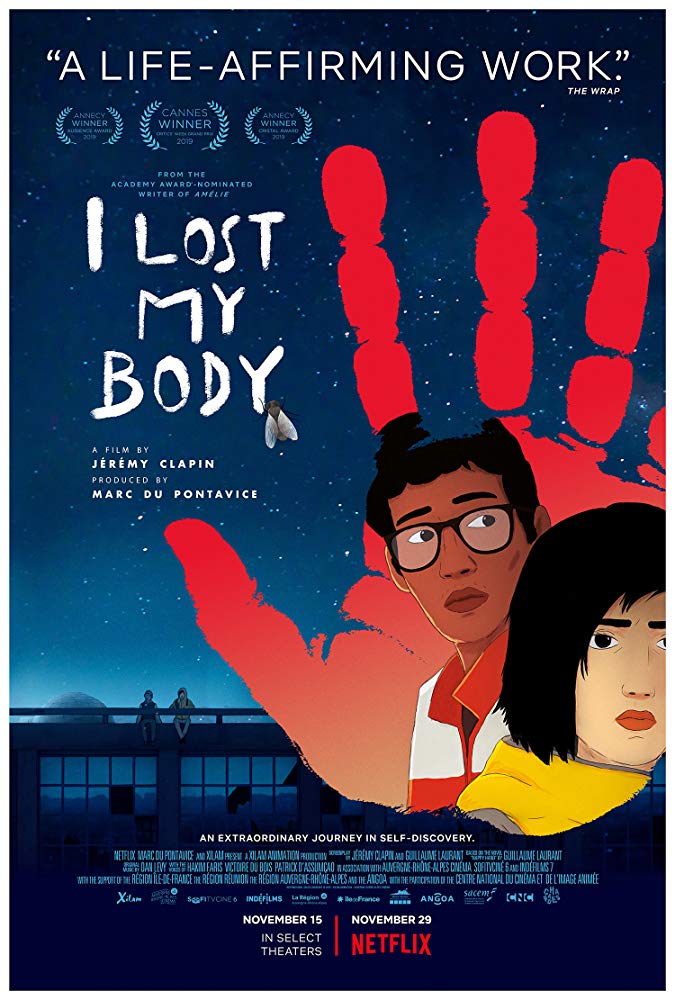 I Lost My Body is the French animated film which details the story of a severed hand that escapes a lab and begins a journey back to its body. The hand belongs to a Naoufel (Dev Patel / Hakim Faris). The film begins with a young Naoufel being told by his father how you are supposed to catch fly. As a boy, Naoufel aspired to be both a pianist and an astronaut. He records his day to day life on a tape recorder. Unfortunately, tragedy strikes and Naoufel’s parents are killed in a car accident. Naoufel is forced to live with his emotionally distant uncle and crude, sex-craved cousin.

As an adult, Naoufel has a job as pizza deliveryman despite his big dreams when he was younger. He is not good at his job and is yelled at by his boss for often being late with his deliveries. During one late delivery, he encounters Gabrielle (Alia Shawkat / Victoire Du Bois). They talk to each other via a speaker as Naoufel is unable to get through the security door of Gabrielle’s apartment complex. And although he never sees her, Naoufel quickly develops feelings for Gabrielle.

Naoufel finds out that Gabrielle works at the local library, but he remains too nervous to go and talk to her in person. One day after she leaves work, he follows her to a neighborhood where she drops off medicine to a carpenter, Gigi (George Wendt / Patrick d’Assumçao). Gabrielle notices him, so Naoufel pretends to be at the job site in response to a want ad for an apprentice position. The terminal ill Gigi reluctantly hires Naoufel after he learns that he is an orphan.

Naoufel moves out of his uncle’s apartment and into an attic apartment owned by Gigi. Naoufel discovers that he can access the roof tops of the buildings nearby from his new apartment and he spends time up there looking at the world. He learns his trade as a carpenter and spends time getting closer to Gabrielle, although he does not tell her that he was the pizza delivery boy from before. During a conversation with Gabrielle, they talk about the Arctic. Gabrielle comments that they must look at the pictures in the book because it is impossible for people like them to ever go to a place like the Arctic. As a result, Naoufel uses his carpentry skills to build a wooden igloo on the roof of his building.

Eventually, Naoufel brings Gabrielle to rooftop to see and experience the igloo. Once there, Naoufel asks Gabrielle if she believes in fate. When she questions him about his inquiry, he states that you can change your fate by doing something unconventional, such as leaping off the roof onto the crane that is a few feet away from them. They talk some more, and Naoufel says that he ordered a pizza. In the igloo, Naoufel reveals that he was pizza delivery boy that Gabrielle spoke to weeks before. Feeling that Naoufel is a stalker, Gabrielle rejects Naoufel and leaves. Hurt and angry, Naoufel goes to his cousin’s party that night and proceeds to get into a drunk fight.

The next day, Naoufel goes to work hungover and sporting a black eye. While he is the middle of cutting wood on a jigsaw, Naoufel is distracted by a fly. Recalling his father’s lesson earlier in life about catching a fly, Naoufel proceeds to catch the fly. However, his watch becomes caught in the jigsaw during the attempt and his hand is severed.

Throughout the film, the hand is seen going through harrowing adventures in its attempt to get back to Naoufel. It has battles with pigeons, rats, dogs, and a blind man before being reunited with Naoufel. However, once it finds a sleeping Naoufel, it is unable to reattach itself to his owner.

After his injury, Naoufel becomes depressed and directionless. He rediscovers his old tape recorder, which still has recordings of his parents, including the car ride before their fatal accident. Sometime later, he leaves his apartment with the tape recorder. Gabrielle comes to see and finds the apartment empty. She proceeds to the roof and finds the igloo. She searches it and finds Naoufel’s abandoned tape recorder. She finds a new recording on the tape player. She is worried that Naoufel has committed suicide, but as she listens to the recording, she discovers that he has successfully leapt off the roof onto the crane as he once said you could do.

The film ends with an image of Naoufel lying on the crane smiling to himself as he looks out at the city. No longer needed, his severed hand retreats into the snow.