In Idiocracy, Joe Bauers is the definition of your average American. After the Pentagon selects him as a guinea pig for a top-secret hibernation program, they forget to wake him in a year’s time. Joe comes to five centuries in the future. He quickly discovers that he’s the smartest person on the planet due to societal regression. Joe must now save the world from its dystopian reality if he wants to survive himself. 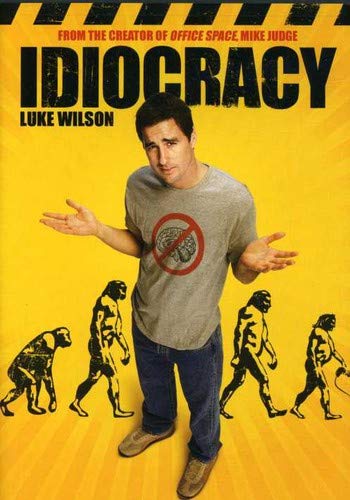 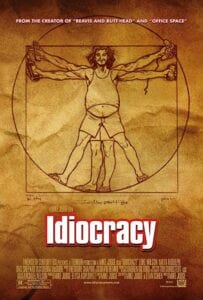 Idiocracy begins with the following narration: “As the 21st century began, human evolution was at a turning point. Natural selection, the process by which the strongest, the smartest, the fastest, reproduced in greater numbers than the rest, a process which had once favored the noblest traits of man, now began to favor different traits. Most science fiction of the day predicted a future that was more civilized and more intelligent. But as time went on, things seemed to be heading in the opposite direction. A dumbing down. How did this happen? Evolution does not necessarily reward intelligence. With no natural predators to thin the herd, it began to simply reward those who reproduced the most, and left the intelligent to become an endangered species.”

We cut to 2005, where a very average soldier named Corporal Joe Bauers works as a US Army librarian. His superiors select him for a secret, year-long, military hibernation project since he really has no ambition to do other than the bare minimum in life. They also want a woman as part of their experiment, so they turn to a pimp named Upgrayedd for assistance. He gives them a prostitute named Rita for a price.

The Army seals the two in their respective hibernation chambers. Soon after, MPs arrest the officer in charge, Lieutenant Colonel Collins, for starting a prostitution ring of his own based on Upgrayedd’s own mentoring. The hibernation project is quickly forgotten, and the military base eventually makes room for a Fuddruckers—which will eventually change its name to Buttfuckers.

More than a year goes by

Five hundred years pass, and the hibernation chambers finally open from the Great Garbage Avalanche of 2505. Both Joe and Rita are alive and well. Joe crashes into Frito Pendejo’s house. He’s your typical American idiot of the future. His place is lined with crap, and a very prominent television screen adorns one entire wall. It’s of course covered in cheap advertisements.

Joe’s arrival interrupts Frito’s favorite show Ow! My Balls! which is quite similar to today’s Chive TV. Annoyed with his appearance, Frito tosses Joe out the window his capsule just broke. Confused, Joe stumbles to a hospital where Dr. Lexus, MD diagnoses him as tarded and fucked up.

When he notices Joe doesn’t have a barcoded tattoo on his left wrist, he can’t charge him for his services and panics. During this little outburst, Joe notices the date of March 3, 2505 on the Hot Naked Chicks and World Report magazine on the doctor’s desk. That same date is also on his doctor’s bill, and Joe suddenly realizes that 500 years have passed since the Army put him in hibernation.

He goes outside to find a world of crumbling buildings, mountains of garbage, and wall to wall idiots. He runs away from the hospital, but soon finds himself under arrest at a Carl’s Jr. vending machine for neither paying his hospital bill nor having a barcoded tattoo.

Why come you got no tattoo?

Joe finds himself in court where his defense lawyer is the Attornee at Law, Frito Pendejo, Esq. Frito stupidly helps the prosecution convict Joe, and when Joe tries to defend himself, everyone thinks he talks like a fag. The judge immediately convicts Joe, and orders him to prison. Once there, a tattoo machine re-names Joe as Not Sure, and the barcode tattoos him as that too.

The jail mandates Joe take an I.Q. test, and when he finds out how simple it is, he realizes how stupid humanity has become. He uses this to his advantage, and easily tricks the prison guards into believing that he’s just finished serving his time. They order him to the line that releases prisoners.

Joe returns to Frito’s apartment, wanting to know if a time machine exists. Frito says there is one, but he only agrees to help Joe after he promises him billions of dollars from a savings account that Joe will open once he returns to the past.

The two head out to find the time machine’s location where they run across Rita. She still can’t figure out that 500 years have passed until Joe’s able to convince her. She says that not even 500 years will stop Upgrayedd from finding her.

Welcome to Costco. I love you.

Frito leads them to a city-sized Costco—the one that taught him how to practice law, mind you. Scanners inside the store spot Joe’s tattoo, and authorities re-arrest him. However, this time, instead of prison, the police take him to the White House. There, President Dwayne Elizondo Mountain Dew Herbert Camacho greets him.

He’s already seen Joe’s I.Q. test which ranked him as the most intelligent man in the world. The President makes Joe Secretary of the Interior to correct the United States’ food and crop shortages, dust bowl, crippled economy, mountains of garbage, and related matters.

It doesn’t take long to learn that Brawndo: The Thirst Mutilator (Gatorade if they would have agreed to letting the film use their name) replaced water for everything because it’s rich in electrolytes. Back in the day, The Brawndo Corporation started a successful ad campaign that claimed water was only good for toilet use, and that helped get the country to where it is now.

Over the years, Brawndo’s electrolytes accumulated in the soil, killed the crops, and caused the food shortage. Joe tries to explain this, but his advise falls on deaf and dumb ears. So he reintroduces the practice of watering crops. Overnight, this causes, the Brawndo Corporation’s stock to fall to the point it’s worthless, and great unemployment quickly follows—all without any visible improvement with the crops.

The people riot, and Camacho’s government makes Joe their scapegoat. They sentence him to participate in what’s known as Monday Night Rehabilitation—Romanesque type gladiatorial games crossed with a good-old-fashioned American demolition derby.

While Joe’s rehabilitation is going on, Rita discovers the water Joe’s using has made crops sprout in the fields. She takes Frito, and bribes a cameraman to show these crops to the people. However, the city streets easily distract both the cameraman and Frito. The local Starbucks brothel has a sale going on, and the boys fight about going it.

However, Frito suddenly remembers to film the crops sprouting. He grabs the camera, and films the fields. When President Camacho sees the thriving new plants on the stadium’s big-screen televisions, he pardons Joe before Stifler incinerates him with a flamethrower.

There’s a big celebration where Joe decides to stay in the present day to help repair America’s lost civilization—President Camacho makes him Vice President of America. Meanwhile, Joe also learns that the Time Masheen Frito referred to this whole time is just an old amusement park ride where a replica Charlie Chaplin serves as leader of the Nazi party—but not using Stormtroopers to wage war on the world. He uses dinosaurs! The U.N. (pronounced “The Un”) Un-Nazied the world forever.

After Joe serves a short term as Vice President, the people elect him as Camacho’s successor. Joe and Rita marry where they then have three of the world’s smartest children. Frito, on the other hand, marries eight women, and fathers thirty-two of the world’s dumbest children. Thus the Idiocracy continues on.

A post credit scene shows a third hibernation capsule open. Upgrayedd pops out before strutting down the street for an uncertain future.