In a World… begins with Carol Solomon who is a struggling vocal coach who dreams of doing voice-over work for films and television. Her father, Sam Sotto, is considered the king of voice-overs, but he discourages Carol from entering his industry. However, when Carol records a temporary track of voice-over narration for a trailer to a major fantasy film series, doors begin to open to her. Meanwhile, the rest of Carol’s family each have their personal issues that threaten to split them all up. 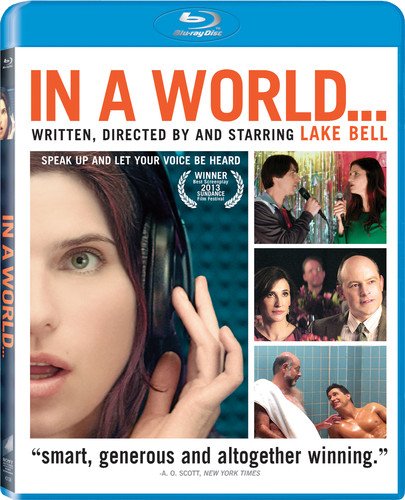 In a World [Blu-ray]

‘In a World… ‘ Movie Summary 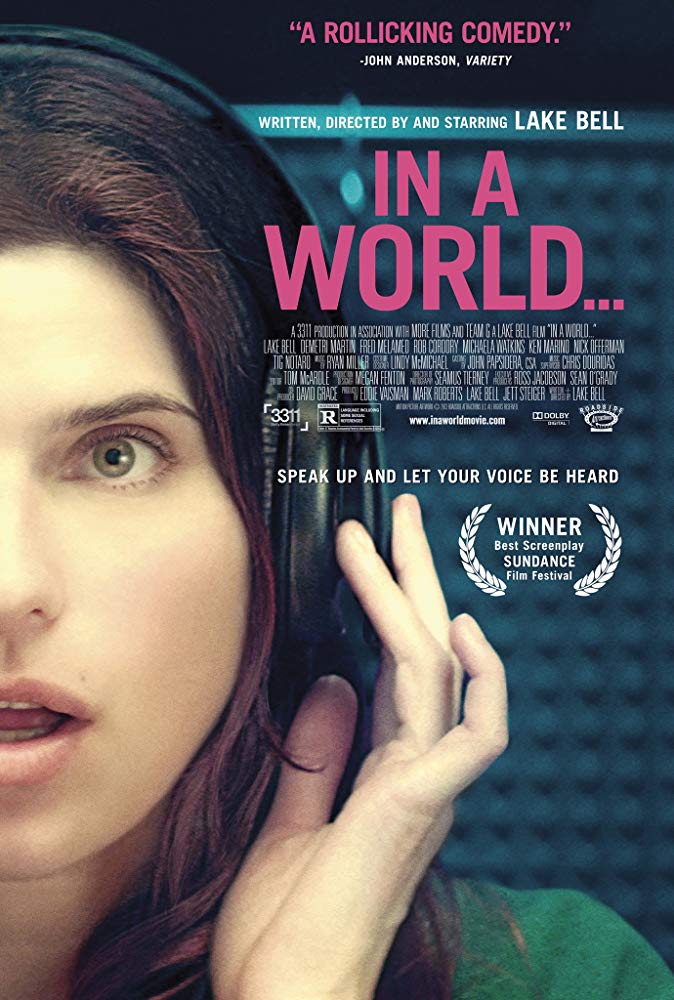 In In a World…, Carol Solomon (Lake Bell) is a struggling vocal coach who dreams of doing voice-over work. She depends on the generosity of her family members who provide her with a place to live. In the beginning of the film, she is living with her father Sam Sotto (Fred Melamed), a Hollywood actor who is known as the king of voice-overs due to his extensive narration of films and television. Sam recently published his autobiography and is set to receive a lifetime achievement award at the Golden Trailer Awards, awards given out for theatrical trailers.

Sam is very critical of Carol and doesn’t believe that she has a future in voice-over. He encourages her to keep doing her work as a vocal coach but not to set her expectations to high. Carol constantly questions her abilities due to her father’s criticisms. Additionally, Sam’s girlfriend, Jamie (Alexandra Holden), is moving in with Sam, so he tells Carol that she needs to move out. Carol and her older sister Dani (Michaela Watkins) are resentful of Jamie since she is a year younger than Carol and thirty years younger than their father.

Carol moves in with Dani and her husband Moe (Rob Corddry), who also works in the recording industry. Dani and Moe have a marriage that appears to have lost its spark, but is functional. Dani works at a hotel as a concierge. Carol visits Dani at work one day and observes an Irish guest, Mr. Pouncer (Jason O’Mara) flirt with her sister. Carol wants to record Pouncer’s voice due to his unique dialect. When Dani won’t let her record him in the hotel, Carol asks Dani to record his voice for her. Dani pretends to be single during the interview with Pouncer, which is included in the recording.

Meanwhile, a major film studio is about to release the first film in a new quadrilogy entitled The Amazon Games. The studio is looking to bring back the “In the world…” line made famous by the late Don LaFontaine, the godfather of all voice-over artists. The voice-over assignment is highly sought, but Sam declines the job when he is approached by the studio for the job. Sam wants to clear the way for Gustav Warner (Ken Marino) to get the assignment. Gustav is Sam’s friend and his heir-apparent. However, Gustav develops laryngitis and fails to show up for the temporary track recording.

Carol continues to work when she can. Carol is retained by her friend Louis (Demetri Martin) to assist Eva Longoria in looping her accent as a British mob boss wife. Louis has a crush on Carol, but can’t seem to ask her out. Carol is approached by one of the other recording engineers, Heners (Nick Offerman), who needs someone to fill in for Gustav to record the temp track for the trailer, and Carol agrees to fill in. The film studio is so impressed with Carol’s work that decide to keep her track and not retain Gustav.

Sam invites Carol to a party at Gustav’s house. Neither Sam nor Gustav know that Carol was the woman who got the quadrilogy job, and Gustav does not know that Carol is Sam’s daughter. Gustav sees Carol at the party and makes advances on her. Carol spends the night and sleeps with Gustav, although she appears to regret it the next day. However, the word gets around about Carol and Gustav quickly, which devastates Louis. Gustav learns the name of the woman that beat him out for the job and realizes that it is Carol. He calls Sam and brags about having sex with her the night of his party. Sam encourages Gustav to continue to have sex with her to throw the competition off her game, not realizing that the competition is his daughter.

Meanwhile, Moe listens to the recording of Dani’s interview of Mr. Pouncer and is dismayed to hear the pair flirting with each other and that his wife say that she does not have a boyfriend. Moe moves out of the apartment when Dani gets home late from work one night. Dani is devastated about the separation and confides in Carol that she only kissed the Irish guest for about twenty minutes and when he went to have sex with her she stopped it. Carol secretly records the conversation and gives the tape to Moe so that he can know what went on, and what didn’t.

A few days later, Carol and Dani go to their father’s house to have dinner with Sam and Jamie. Carol reveals to her father that she got the voice-over job over Gustav. Carol also tells him that she has booked a few other assignments as a result of the first job. Sam is dismissive of his daughter’s accomplishments which upsets Carol. Carol leaves the dinner with her confidence shaken. Sam calls the studio and says he is now willing to take the voice-over assignment for the quadrilogy. The studio is happy with Carol, but is willing to let all interested parties compete. The studio informs Sam, Gustav, and Carol that they must send recordings of their work, and they will choose the best person for the job.

Carol is ready to drop out of the competition, but Louis boosts her confidence and agrees to work as her coach for the assignment. Louis also tells Carol that he likes her, and Carol reciprocates his affection. The sudden change of luck further boosts Carol confidence. The couple work on Carol’s audition recording together. Once they are done, they go out on a date together, which at the end of Louis kisses Carol.

The night of the Golden Trailer Awards, Carol and Dani plan to skip the ceremony over their anger at their father. Moe, who has forgiven Dani, convinces them to go because Sam is receiving his lifetime achievement award. During the ceremony, Katherine Huling (Geena Davis), the Amazon Games executive producer, debuts the trailer for the first film in the series. Carol’s voice recording is the one used in the trailer which devastates Sam who storms off to have his break down in private. Jamie follows him and berates him for his behavior. She threatens to leave him if he doesn’t act like the bigger man and celebrate his daughter’s success.

Sam accepts his lifetime achievement award and dedicates his award to his daughters, much to their surprise. Carol runs into Katherine in the bathroom and thanks her for picking her for the job. The studio head explains to her that Carol was not the best one for the job but that she was chosen for the greater meaning of having a woman in that role.

At the end of the film, Carol is in a relationship with Louis. She continues to work as a voice coach. She teaches classes to low self-esteem, high-pitched, squeaky-voiced women who speak like a baby girl and wish to sound like more mature women.