An enormous alien space craft enters orbit around the Earth. It dispatches a series of smaller city sized ships that begin to hover over every major city on the planet. The citizens of the planet, including United States President Thomas J. Whitmore wonder if the aliens are here as friends or foe. In California, pilot Captain Steven Hiller is recalled from leave to potentially lead an attack force against the aliens if they turn hostile. Meanwhile, satellite technician David Levinson has detected a hidden message being broadcast in the Earth’s satellites that may indicate that the countdown for the end of mankind may have already begun. 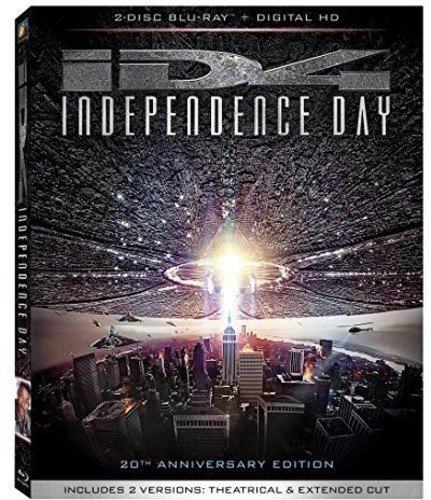 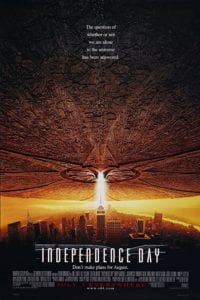 The Earth detects the presence of an enormous space craft approaching orbit around the planet. The space craft, roughly one fourth the size of the Moon, interferes with the Earth’s satellites in orbit around the planet. After achieving orbit, the large ship deploys dozens of smaller saucer shaped ships towards the major cities around the world. The world is on the edge of panic and wonders, are the visitors friends or foes?

David Levinson (Jeff Goldblum) is an MIT-trained satellite technician decodes a signal from the aliens embedded within the global satellite network. Levinson realizes that the signal is a countdown clock and predicts that the aliens are here to do the human race harm. David and his father Julius (Judd Hirsh) leave New York City and drive to Washington D.C. to warn David’s ex-wife Constance Spano (Margaret Colin) about the countdown. Constance is the White House Communications Director for President Thomas J. Whitmore (Bill Pullman).

Whitmore is desperately trying to keep the citizens of the United States from panicking as the ships hover over several U.S. cities leading up to the Fourth of July. After David reveals the countdown clock to Whitmore, he grabs his daughter Patricia (Mae Whitman) and orders the evacuation of all the major cities in the United States. Whitmore, his daughter, David, Constance, and Julius join an army of Presidential staff who leave Washington D.C. just as the ship hovering over Washington D.C. destroys the Capital with one intense laser blast. All the other ships around the planet also destroy the cities that they hover over and then move on to the next city.

Meanwhile, in California, Captain Steven Hiller (Will Smith) is recalled from his Fourth of July holiday leave. He leaves his stripper girlfriend Jasmine Dubrow (Vivica A. Fox) and her son Dylan (Ross Bagley) at home and heads to El Toro Air Force Base. Hiller along with his squad mates are ordered to attack the alien ship hovering over California. As his squad approaches the alien craft, they discover that their weapons cannot penetrate the ship’s protective shield. To make matters worse, the ship launches dozens of small fighter craft that destroy nearly every pilot, except Hiller.

Hiller crashes his plane during an attempt to escape from a pursuing alien craft. The escape does bring down the alien ship as well, and Hiller proceeds to punch the alien pilot in the head, knocking it unconscious. Hiller proceeds to drag the body of the alien pilot towards a hidden base known as Area 51. While in route, Hiller encounters a large convoy of civilian vehicles led by former pilot Russell Casse (Randy Quaid). Hiller tells them that he is heading towards the base and Casse’s group agrees to give him a ride.

At the same time, Whitmore leads his group to Area 51 in Air Force One. Whitmore learns from the lead scientist of the facility, Dr. Brackish Okun (Brent Spiner), that the government has secretly known of the existence of alien life since the crash in Roswell, New Mexico during the 1940’s. Okun shows Whitmore the recovered alien craft and the bodies of the dead aliens that were found. However, Okun states that he doesn’t really know anything that will help defeat the aliens. At that time, Hiller shows up with the captured alien pilot. Okun begins to conduct an examination of the living alien when the alien suddenly regains consciousness. The alien takes control of Okun’s mind and kills the scientists that were helping Okun.

The alien tries to take over Whitmore’s mind, but the alien is killed when Major Mitchell (Adam Baldwin) shoots the alien. Okun lies in a coma, but Whitmore’s brief interaction with the alien’s mind allowed to see an image of their plans for the Earth. Whitmore states that the aliens are like locusts who travel from one planet to the next, stripping each planet of its resources. Whitmore orders a nuclear attack on one of the alien ships, something he has been reluctant to do. However, the nuclear missile has no effect on the alien ship hovering over Houston, and Whitmore orders no additional nuclear attacks.

Meanwhile, Jasmine and Dylan survive the attack on Los Angeles and proceed to make their way to the El Toro base. Along the way, they gather other survivors that they find, including First Lady Marilyn Whitmore (Mary McDonnell), who was in Los Angeles when the alien ships arrived and is seriously injured. They make their way to El Toro but find the Air Force base destroyed. They make camp in the ruins and a short time later, Hiller shows up at the base with a stolen helicopter and takes all the survivors back to Area 51. Marilyn is rushed to the medical lab, but she dies shortly after reuniting with her husband and daughter.

On the Fourth of July, David makes a break through with his research and discovers a way to deactivate the shields of the alien ships by experimenting on the crashed Roswell ship. David informs Whitmore that he maybe able to introduce a computer virus into the alien mothership that would disable the shields of all other alien ships, allowing the human ships to shoot them down. However, David informs that he would have to have access to the mothership computer system itself.

Hiller volunteers to pilot David to the mothership in orbit with the Roswell ship. Whitmore orders the mission and then has General William Grey (Robert Loggia) coordinate a global counter attack with all surviving world-wide forces using Morse Code. Hiller and Jasmine get married prior to the mission with David and Constance acting as witnesses to the ceremony. Whitmore organizes a squadron of pilots to launch an attack from Area 51. Casse joins the squadron despite his years away from jets and his alcoholism. Whitmore, a former pilot himself, decides to lead the squadron.

Meanwhile, near Area 51, David’s computer virus finally takes effect and disables the alien ships’ shields. Whitmore’s forces severely damage the large alien ship but cannot cause enough damage to disable or destroy it. As the alien ship prepares to use its main weapon on the human base, Casse flies his plane into firing mechanism of the alien ship. The resulting explosion destroys most of the alien ship and Casse’s jet. General Grey has his men communicate to the rest of the world how to take down the alien ships.

Back in space, Hiller and David barely escape from the mothership before it closes its docking bay doors. The nuclear missile explodes and destroys the entirety of the mothership. The concussive wave hits the Roswell ship and sends them tumbling towards the Earth. Hiller successfully crashes the ship and he and David walk away unharmed. They are welcomed home by Jasmine and Constance and congratulated by President Whitmore. As burning debris of the alien mothership falls from the sky, Dylan finally asks if it is time to light fireworks for the Fourth of July.