Twenty years have passed since the Earth joined together as one fighting force and successfully fought back against the alien invaders in the events of the first Independence Day. However, a new threat has emerged that once again threatens the life of every person Earth. Two alien ships approach the Earth. One is shot down by the newly advanced Earth military forces, but the second is a giant alien mothership that is more than twice the size as the last one. Once again, the world’s armies must band together to save the world. Do they have enough firepower to once again repel the alien invaders or will the Earth finally meet its doom? 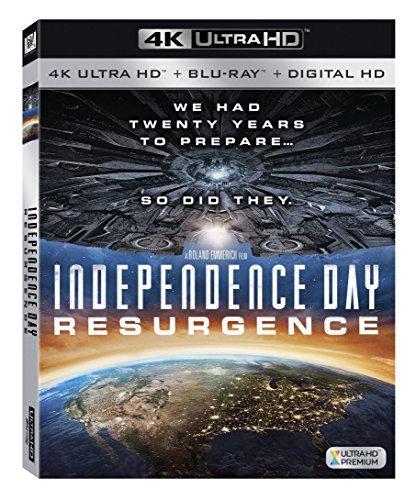 Twenty years have passed since the Earth joined together and successfully fought back against alien invaders in the events of the first Independence Day film. In the time since, the United Nations has founded the Earth Space Defense (ESD), a global defense and research program that reverse engineered the alien technology and built a new line of defenses for the inhabitants of the Earth. This includes an early warning system against extraterrestrial threats by the use of space ships and a lunar base that monitors our social system.

Normal civilization has been restored and the Earth has a stable peace among the nations. The large cities destroyed by the aliens twenty years ago have been rebuilt and modernized. The ESD has established Area 51 as its headquarters, as well as distant bases on Mars and the moon Rhea. Finally, ESD has also set up an orbital defense satellite above the Earth to repel any future attempts at an invasion.

The director of ESD is David Levinson (Jeff Goldblum) who has committed himself to preparing the Earth for the aliens’ return. He never rests and travels to the African state of Republique Nationale d’Umbutu to investigate some strange alien activity. The small African nation is the site of the only alien ship to have landed twenty years before. David travels to the alien ship with warlord Dikembe Umbutu (Deobia Oparei) and Dr. Catherine Marceaux (Charlotte Gainsbourg), a woman who David has previously been in a relationship with.

Once there, David discovers that the aliens on the African ship were able to send a distress signal to their home world before their defeat. It is also discovered through Catherine that people who had telepathic contact with the aliens previously, such as former United States President Thomas Whitmore (Bill Pullman), Dr. Brackish Okun (Brent Spiner), and Umbutu are telepathically linked to the aliens and are having visions of an unidentified spherical object.

Suddenly, an unidentified spherical ship emerges from a wormhole near the Earth’s Moon. The leaders of the Earth, including David, confer via satellite to decide how to react. Despite David stating that the ship is not of a design of the previous aliens, the leaders of the world vote to attack and order the lunar base to fire upon the ship. The ship is destroyed and the wreckage crashes in a crater on the moon.

David contacts his friend at the lunar base Jake Morrison (Liam Hemsworth), and Jake’s co-pilot Charlie Miller (Travis Tope), to pick him up in Africa and take him to the crash site. Catherine, Umbutu, and U.S. federal controller Floyd Rosenberg (Nicolas Wright) travel with him, despite David being ordered to appear at the 20th anniversary celebration of the alien liberation by the current President of the United States, Elizabeth Lanford (Sela Ward).

The group takes Jake’s tug to the wreckage in the Van de Graaff crater. Once there, they discover a large container that survived the explosion. As they are recovering the container, an alien mothership appears above the Moon. The enormously large ship is so large that it has its own gravity and Jake’s tug is pulled up into the ship’s gravity well. The mothership quickly destroys the lunar base and the Earth’s orbital defenses.

It lands over the entirety of the North Atlantic Ocean and starts to drill down toward the Earth’s molten core. Scientists conclude that if the aliens reach the core, the Earth will be destroyed. The space tug passengers and crew are barely able to escape destruction as gravity resumes upon the mothership’s landing. David and the tug return to the base at Area 51.

Once at Area 51, David, President Whitmore, and U.S. General Joshua Adams (William Fichtner) interrogate one of the aliens that they are holding prisoner at Area 51. They learn that the aliens exist in a hive mind and that one of their colossal Queens is commanding the second invasion of Earth. David theorizes that if they kill the new Queen, her forces will stop drilling and either retreat or go dormant.

President Lanford orders an attack on the alien ship to be led by Captain Dylan Hiller (Jessie Usher), the step-son of Captain Steven Hiller (Will Smith) who defeated the aliens twenty years before but passed away in the time since. The attack is unsuccessful and all of the Earth’s ships are caught in a trap laid by the alien Queen. Nearly every ship and pilot are destroyed. Only Dylan, Jake, Charlie, and Chinese pilot Rain Lao (Angelababy) survive.

Back at Area 51, Dr. Okun awakes from a twenty year coma. He opens the container that Jake and David retrieved from the wreckage of the other alien ship on the Moon. A giant white sphere is found inside that matches the visions of the linked humans around the Earth. The sphere has virtual intelligence and reveals that her mission is to evacuate survivors of alien invasions to a planet of refuge. The sphere refers to the aliens invaders as Harvesters. The sphere communicates that only by uniting can they attack the Harvester home planet and win.

Back on the mothership, the surviving ESD pilots manage to escape from the mothership by hijacking alien fighter crafts. They follow the Queen’s personal ship, which is heading to Area 51 after she detects the presence of the alien sphere. David theorizes that the Queen wishes to extract information from the sphere about the refugee planet.

At Area 51, the scientists become aware that the Harvester Queen is in route to acquire the sphere. The ESD decides to duplicate the sphere’s signal and lead the Queen into a trap while simultaneously placing the sphere into an isolation chamber which will cut off the sphere’s signal. The duplicate signal is placed on Jake’s tug and President Whitmore volunteers to pilot the transport ship on a suicide mission.

The plan works and Whitmore detonates the bomb, killing himself. However, the Queen is not killed. Even worse, alien prisoners break free from the cells at the Area 51 base and attempt to destroy or capture the sphere. Okun, Umbutu, and Rosenberg defend the sphere, until the giant Queen reaches into the base and pulls out the sphere.

The forces on the base attempt to fire on the Queen, but she has her own shield. It is not until the Queen lowers her shield to counterattack that Whitmore’s daughter Patricia (Maike Monroe) damages the Queen’s shield. At that time, Jake, Dylan, Charlie, and Rain arrive in their alien ships and kill the Queen before she can escape with the sphere.

After the Queen is killed, the remaining alien forces begin to retreat, thus ceasing their drilling into the Earth’s core. Okun reveals that the sphere has asked humanity to lead her resistance and offered them new technology that will allow the human forces to travel to the Harvester’s home world to launch a counterattack.