In German-occupied France, a young Jewish refugee named Shosanna Dreyfus witnesses Colonel Hans Landa slaughter her family. Narrowly escaping with her life, she plots her revenge several years later when German war hero, Fredrick Zoller, takes an interest in her, and arranges an illustrious movie premiere at the theater she now runs. With the promise of every major Nazi officer in attendance, the event catches the attention of the Basterds; Lt. Aldo Raine’s ruthless group of Jewish-American guerrilla soldiers. As the relentless executioners advance and the young girl’s plans are set in motion, their paths cross for a fateful evening that changes the war, and history forever. 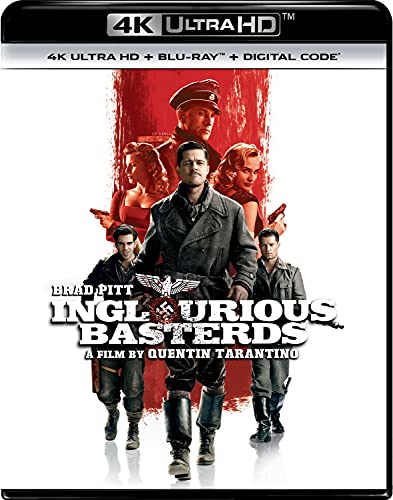 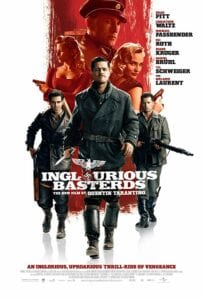 Inglourious Basterds begins in 1941. Shosanna, a jewish girl in France, hides beneath the floor of a farmhouse while SS colonel Hans Landa interrogates the farmer for the presence of hidden jews in the home. When they are found, Shosanna flees while the rest are gunned down.

Later, Lieutenant Raine recruits Jewish-American soldiers to fight in a special Army unit, the Basterds, to spread terror in the German army. They are known for killing and scalping Nazis and carving a swastika into the foreheads of the survivors. It works, and fear of the Basterds spreads through the German ranks.

Shosanna changes her identity and runs a movie theater in occupied Paris. She is romatically pursued by Frederick Zoller, a famous German sniper with a high body count. Zoller has starred in a propaganda film about his success in battle. Zoller convinces Joseph Goebbels to hold the premiere at Shosanna’s theater. Ultimately, it is decided that all of the German higherups will attend the premiere at Shosanna’s theater. Shosanna hatches a plan to burn the theater down with the German’s trapped inside.

Meanwhile, British Royal Marine plans an attack on the premiere at the theater. He teams up with the Basterds to go undercover and massacre the Nazis at the theater by meeting with a German film star, Bridget von Hammersmark. After nearly escaping a run-in with some German soldiers, von Hammersmark is shot in the leg, and the Basterds lose all of their German-speaking allies.

Hans Landa is in Paris. He investigates the shooting, and he finds von Hammersmark’s shoe and a napkin with her information. Raine comes to the primer posing as an Italian filmmaker, along with two other Basterds. Lands is at the premiere and quickly figures who the Basterds are. He takes von Hammersmark to a private office, interrogates her, and then murders her when he confirms she has been working with the British and Americans. Raine and another Basterd are taken prisoner. However, Landa makes a deal for immunity and allows the mission at the theater to proceed.

Finally, as Landa and Raine reach allied territory, Banda honors the agreement with Landa for immunity, but only after Raine carves a swastika into Landa’s forehead, proclaiming that this one might just be his masterpiece.