With Inside Out, a young girl named Riley moves from her Midwestern town to chaotic San Francisco. Her emotions: Anger, Sadness, Disgust, Fear, and Joy disagree on how to deal with this dramatic change. This causes problems in Riley’s Headquarters—the central living and working place for her five emotions. Soon, Riley’s memories begin to change from happy to sad. After Joy and Sadness have a small fight in Headquarters, they find themselves tossed out of it. That leads Anger, Fear, and Disgust in charge of Riley’s mind. Can Joy and Sadness return before Riley’s lost forever? 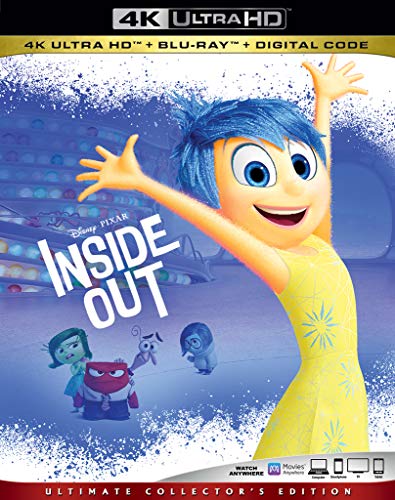 ‘Inside Out’ Movie Summary 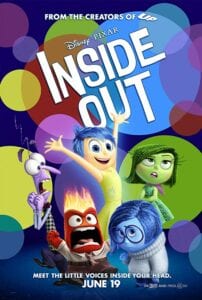 The movie Inside Out starts with baby Riley living in small town Minnesota. Inside her mind’s Headquarters resides the personification of five basic emotions: Joy, Sadness, Fear, Disgust, and Anger. These emotions influence her actions in the real world via a small color-changing control console.

As she grows up, all her experiences turn into colored orbs. These memories then roll into her long-term memory while she sleeps at night. Riley also has five core memories that she keeps in a hub in her mind—each one is the source of certain aspects which make up her personality. They take the form of giant floating islands in her mind.

As an innocent child of wonder, Joy is the emotion’s leader. However, as young children often have trouble understanding their emotions, none of the four understand or appreciate Sadness. Joy tries to keep Sadness away from both the console and memory orbs at all costs.

Some years pass, and Riley turns 11. Her dad takes a job in San Francisco, and it uproots the entire family. Her first impressions of the new city are terrible. Their new house is small and rundown. There’s been a mix up at the mover’s office, and they will be late with their furniture, and the local pizza parlor only serves pizza with broccoli. Additionally, Riley’s dad is under a lot of stress from this change of life, so he’s not his usually happy self.

Sadness starts creeping into Riley’s life more and more—touching Riley’s memories, and turning them from happy to sad. Joy does her best to keeps Sadness occupied, and isolate her. However, on Riley’s first day of school, Sadness makes Riley to cry in front of her entire class. This earns Riley her life’s first sad core memory.

With Joy and Sadness gone, Anger, Fear, and Disgust have full control of Riley, and the results are quite disastrous. They distance Riley from her parents, friends, and hobbies until her personality islands begin to crumble into an abyss below called the Memory Dump—there the distant memories fade away to nothingness.

Eventually, Anger gets a bright idea, and inserts that little bulb into Riley’s console. His idea is to have Riley to run away from home, and hightail it back Minnesota where she can be happy again.

Meanwhile, Joy and Sadness find themselves winding through the cerebral maze of Riley’s long-term memory. Eventually, they come across Bing Bong, Riley’s somewhat forgotten imaginary friend as a little girl. He suggests the three ride the Train of Thought back to Headquarters, and off they go.

Trying not to lose their Train of Thought

Unfortunately, the route to the train station is fraught with much peril, and more of life’s mishaps cause Riley’s personality islands to crumble. Soon though, the three do catch the train only to see it stop when Riley falls asleep. Sadness uses a nightmare to wake Riley and start the train running gain. However, it derails entirely when Honesty Island collapses from Riley stealing her mother’s credit card to pay for the bus ride back to Minnesota.

Joy’s now desperate to get Riley smiling again, and she ditches Sadness to take a recall tube back to Headquarters when one appears. Once inside, the ground below the tube collapses, and it falls to pieces. Joy and Bing Bong fall into the Memory Dump below.

With all hope lost, Joy breaks into tears until she discovers a sad memory in the pile of forgotten memories. She finds it turns happy when Riley’s parents and friends comfort her. Joy finally understands that Sadness helps evoke empathy in others—prompting others to reach out to help Riley when she finds herself feeling alone and overwhelmed. While Joy means well, sheltering Riley from sadness also keeps her from happiness.

Joy and Bing Bong work together to use Bing Bong’s old wagon rocket to escape the Memory Dump. However the wagon is too heavy to fly high enough with the two of them in it. Bing Bong encourages Joy to try one more time, and on the way up, he jumps out so that Joy can escape. Alone, he then fades away into the other memories while Joy helplessly looks on.

Joy tracks Sadness down, and sends her back to Headquarters on a cloud. She then duplicates Riley’s imaginary boyfriends (from Canada) many times over to help lift her high enough into the air that she can reach and fall on the trampoline out on Family Island. Once she hits it, she flies through the air, grabs Sadness off the cloud, and they make it back to Headquarters. However, they find themselves stuck outside the building.

Disgust gets Anger to blow his top. The flames from his head burns a hole open in the window. Joy, Sadness, and the core memories come back inside where they are safe.

By now, Anger’s bright idea has disabled the console, and Riley is on a bus back to Minnesota. As the emotions look to Joy to save the day, she surprises them when she has Sadness reactivate the console. It suddenly springs to life, and Sadness is able to get Riley to return home.

As Sadness returns Riley’s core memories to where they belong, Riley arrives back home to find her worried parents looking for her. As she tearfully confesses that she misses Minnesota and the life she left behind, her parents comfort her—admitting they too miss Minnesota. Joy and Sadness work together at the console as a new core memory rolls into Riley’s mind. It forms a new island that represents Riley’s acceptance of her new life in San Francisco.

A year next passes, and Riley’s fully adapted to her new home. She’s made some new friends, and returned to playing hockey. Inside Headquarters, Riley’s emotions admire both her new personality islands that have sprouted up and her newly expanded console. With so many new buttons and knobs to explore, they might want to stay away from that puberty button for now.