Based on the classic first novel of The Vampire Chronicles by Anne Rice, the film tells the story of a nearly two-hundred-year-old vampire named Louis as he is interviewed by a modern-day reporter. Louis details how he was turned by the infamous vampire Lestat in 18th Century New Orleans. Once a vampire, Louis struggles to adapt to his new lifestyle of feeding on humans due to his unquenchable thirst for blood. Only the addition of the young girl Claudia to his vampire family makes life worth living for a period of time. However, does Louis have any hope of ever finding the peace that he truly seeks in life in a world filled with death? 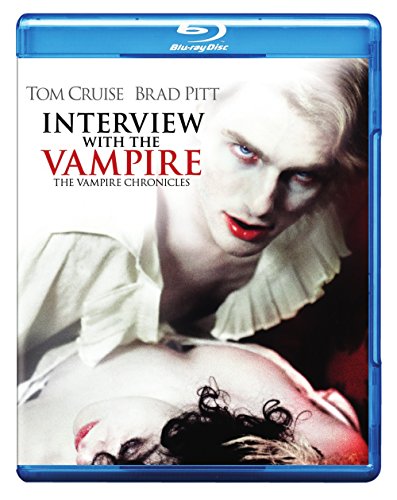 ‘Interview with the Vampire: The Vampire Chronicles’ Movie Summary 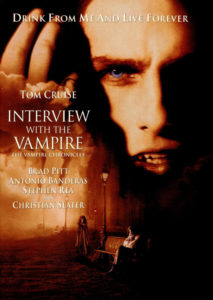 In modern day San Francisco, a reporter Daniel Molloy (Christian Slater) interviews an interesting subject, a man by the name of Louis de Pointe du Lac (Brad Pitt). Louis claims to be a 200-year-old vampire and relays his origin story to the young reporter.

Louis’s story begins shortly after the death of his wife and unborn child in 1791. Living in Spanish Louisiana, Louis is a wealthy plantation owner who courted death due to loss of his family. Unbeknownst to Louis, he is being stalked by the vampire Lestat de Lioncourt (Tom Cruise). One night after drinking, Louis is attacked by Lestat who bites him. Lestat offers to turn Louis into a vampire. The despondent Louis accepts the offer. However, he soon regrets his decision as he finds Lestat to be a leach upon his family’s wealth and is disgusted by what is required for vampires to survive. Where Lestat enjoys the hunting and killing of humans, Louis suppresses his instinct to kill and feeds on the blood of animals instead. Louis chooses to suffer while Lestat revels in a vampire’s existence.

A few years later, a plague has broken out in the New Orleans Quarter. A somber and hungry Louis wanders the deserted streets. He hears the cries of a young girl who is sits over the corpse of her dead mother. The girl, Claudia (Kirsten Dunst), pleads for help from Louis. However, Louis is overcome by his hunger, and he feeds on the desperate child. Lestat arrives and laughs at Louis who is now devastated by his actions. After Louis leaves, Lestat turns the dying Claudia into a vampire. The introduction of Claudia into their small vampire coven gives Louis a purpose. He and Lestat raise Claudia as a daughter, although only Louis has a fatherly love for the girl. Lestat lavishes riches on Claudia and trains her to be a merciless killer.

Evil is a point of view. God kills indiscriminately and so shall we. For no creatures under God are as we are, none so like him as ourselves Lestat de Lioncourt (Tom Cruise)

Thirty years pass and although Claudia matures intellectually, she is condemned to a child’s body for eternity. Claudia becomes frustrated with her status and Lestat continues to treat her as a little girl. Claudia blames Lestat more than Louis for turning her into a vampire and she suggests to Louis that they should leave Lestat. One night, Claudia tries to apologize to Lestat by providing him with two twin boys for feeding. However, the gift is a ruse as the boys are already dead from an overdose of laudanum. After Lestat feeds, the boys’ dead drug filled blood weakens Lestat. Claudia slits Lestat’s throat and allows him to bleed out. Louis is shocked and upset by Claudia’s actions. Nevertheless, he helps Claudia dump Lestat’s body into an alligator infested swamp.

Louis and Claudia spend the next few weeks preparing to travel to Europe in search of other vampires. However, Lestat returns the night they are scheduled to leave. Having survived off the swamp animals for several weeks, a weakened Lestat attacks his former companions. Louis sets Lestat on fire to save Claudia. While their home burns, Claudia and Louis head to the harbor to board their ship and make their escape to the old world.

After arriving in Europe, Claudia and Louis spend years scouring the continent for other vampires, but they find none until they arrive in Paris in 1870. Louis encounters a theatrical vampire by the name of Santiago (Stephen Rea) and his companion Armand (Antonio Banderas) on the streets of the City of Lights. Armand invites Louis and Claudia to his coven, the Théâtre des Vampires, where the vampires’ stage theatrical horror shows for humans. Louis and Claudia find the coven and their “art” strange. As Louis and Claudia leave the theater, Santiago reads Louis’ mind and suspects that Louis and Claudia murdered Lestat, a vampire they are familiar with. Additionally, the theater is suspicious of Claudia due to her young age. Armand warns Louis to send Claudia away for her own safety. For his own part, Louis is interested in Armand’s coven and considers staying in order to learn more about being a vampire in the modern world.

Claudia begins to suspect that Louis will leave her and asks Louis to turn a human woman, Madeleine (Domiziana Giordano), into a vampire companion for her. Unable to deny Claudia anything, he complies with her request. However, the theatre vampires arrive and abduct the three of them and take them back to the theater. The coven decides to punish them for Lestat’s murder. They imprison Louis in a coffin and trap Claudia and Madeleine in an outside chamber where the sunlight burns them to ash. Armand does not participate, but he does nothing to stop them either.

The next day, Armand frees Louis from his coffin. Louis leaves but returns a few hours later shortly before sunrise to seek his revenge. He sets the theater on fire, killing all the vampires including Santiago. Louis leaves the burning theater and runs straight into the sunrise. Armand arrives and takes Louis into his carriage, protecting him from experiencing the same fate as Claudia. Armand offers Louis a place by his side, seeing in Louis the same thing as Lestat did. A vampire that can help him transition into the new world. Louis rejects Armand’s offer and leaves. Louis knows that Armand allowed Claudia to die so that he could have Louis to himself.

Louis explores the world over the next few decades…alone. He returns to New Orleans in 1988. One night he encounters a weakened and decaying Lestat living in an abandoned mansion. Lestat has struggled to adapt to the modern world and his mind teeters on madness. Lestat survives by feeding on rats just as Louis once did decades before. Lestat asks Louis to rejoin him to be his conduit into the new world. He expresses his regret to Louis for turning Claudia at such a young age. Louis, now a much more confident vampire, rejects Lestat’s offer and leaves.

Louis concludes his interview with Molloy. Molloy is fascinated by the story and requests that Louis make him into his new vampire companion. Louis is disappointed that he has failed to convey the tragedy of his existence as a vampire and feigns anger at the young interviewer by threatening to feed on him. Louis’ ploy works and Molloy flees the hotel room and drives away in his car. He begins playing the interview tapes of Louis as he drives. On the Golden Gate Bridge, Molloy is attacked by Lestat. Lestat bites Molloy and lightly feeds on him before taking control of the out-of-control car. Revived by Molloy’s blood, Lestat offers Molloy the choice that he “never had”, whether to become a vampire. Lestat continues to drive down the road as “Sympathy for the Devil” by Guns N’ Roses plays the scene off.