In Invasion of Astro-Monster, aliens from the mysterious Planet X hidden on the dark side of of Jupiter, come to Earth. They ask humanity to let them borrow Godzilla and Rodan to help save their world from the dreaded King Ghidrah. However, the aliens actually plan to use the monsters to take over our planet. 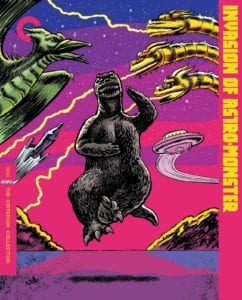 Astronauts Kazuo Fuji and Glenn Amer are sent to explore the mysterious “Planet X” by the World Space Authority. Shortly after landing on the, seemingly, deserted planet, Fuji and Glenn are contacted by the planet’s inhabitants, who live completely underground. These inhabitants, the “Xiliens,” inform Fuji and Glenn that they were driven underground; after their planet was destroyed by a creature they call “Monster Zero.” During their initial meeting with “The Controller,” Planet X’s leader, ”Planet X” is attacked by the much feared “Monster Zero.”

The two Earthlings instantly recognize “Monster Zero” as the winged, three headed, monster known as King Ghidora, which had previously attacked Earth. The “Xiliens” are able to ward off Ghidora, this time, but know it will return. So, the “Xiliens” asked Fuji and Glenn to return to Earth and plead with the planet’s leaders to let them borrow the monsters Godzilla and Rodan, who had previously fought together against King Ghidora, successfully driving the winged monster away from Earth. In exchange, “The Controller” offers to provide aEarth with a cure for all of the diseases that currently plague the planet. Fuji and Glenn are allowed to leave “Planet X” so they can broker a deal on Earth.

Meanwhile, on back on Earth, an inventor named Tetsuo Teri meets with a beautiful woman, Miss Namikawa, who wants to purchase his electric, radio wave, siren for her alleged employers, the World Education Company. Namikawa receives the apparatus from Teri, but disappears without making any form of payment. She continuously brushes off Teri’s attempt at having meetings, so Teri begins to follow her around, learning that she is dating astronaut Glenn. While playing amateur spy, Teri is captured by Xiliens, who seem to have already settled on Earth.

While Fuji and Glenn meet with government officials, to broker the deal for Godzilla and Rodan’s services, three spaceships arrive above Earth. One craft lands, allowing the Xilien Controller can meet with Earth’s dignitaries to finalize the deal. However, the other two crafts, out of nowhere, use laser bubbles to lift Godzilla and Rodan out of the nearby lake to transport them back to “Planet X.” The three spaceships eventually make their way back to “Planet X,” taking the two legendary monsters, two astronauts, and a scientist, Dr. Sakurai, with them.

Shortly after landing on “Planet X,” the clash of the titans is on! Godzilla and Rodan engage in a brief skirmish with King Ghidora, but the duo is quickly able to get the upper hand and force Ghidora to retreat into space. Before the monster fight ended, Fuji and Glenn began investigating the interior of “Planet X,” discovering a mysterious room full of gold and a gaggle of females who looked exactly like Glenn’s girlfriend, Miss Namikawa. The astronauts are returned to The Controller, who gives them a tape that will explain how to make a cure for all of the Earth’s diseases. Fuji, Glenn, and Sakurai are, then, put on a craft that looks like their P-1 spaceship and sent back to Earth. However, as the ship pulls away from “Planet X,” the two Earth based monsters, Godzilla and Rodan, are seen angered that they are being abandoned by the astronauts.

Earth’s scientists immediately began examining The Controller’s tape; only to discover that the Xiliens, who have zero emotions and are controlled only by computers, had already began colonizing on Earth and the cure tape contained orders for Earthlings to give over the planet’s reins to The Controller. At this point, all hell broke loose on Earth, as The Controller told his people to implement Plan Z, Item 4, and Schedule 5. “Planet X” war crafts began destroying all Japanese space crafts. The three monsters, which have all been returned to Earth, are now controlled by The Controller’s magnetic radio waves and they are systematically destroying Japan. Again!

Thankfully, Astronaut Glenn learned from his girlfriend, Namikawa, who was a “Planet X” spy, that Xiliens can be stopped by using the high pitched radio wave transmitter she stole from Tetsuo Teri. Fuji, Glenn, Sakurai, and Teri hook up a prototype transmitter to broadcast radio station equipment and begin sending out the sound, worldwide, while asking EVERYONE to turn their radios up to eleven, for maximum coverage. The sound caused the Xilien computers, space crafts, and control centers to begin malfunctioning and exploding, killing off all of the colonizers.

After the radio waves temporarily paralyze the three monsters, the trio regains their faculties and begins battling each other. Again! Godzilla immediately attacks King Ghidora, which also revives Rodan. Godzilla and Rodan begin double teaming “The King,” taking its laser beams, until they are able to drive it into the sea. All three monsters crash into the water, with only Ghidora returning to the surface, and flying back into space. Again! Godzilla and Rodan are never seen returning to the surface and are, presumably, taking naps. Again!