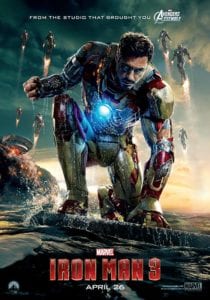 The self-made superhero, Tony Stark (Robert Downey, Jr.), is back, and he’s more tormented than ever now that aliens and gods had their way with the world in 2012’s The Avengers. This time he’s made more iron friends to help save the one thing he loves more than a warm shawarma, that little piece of heaven herself, Pepper Potts (Gwyneth Paltrow).

He’s going to need all their help too as a new menace has begun terrorizing the planet – a man only known as the Mandarin (Ben Kingsley). In time, we find out that hiding in the shadows lurks the real threat via a brilliant lunatic that Stark shunned at the turn of the century named Aldrich Killian (Guy Pearce). It seems he has a special place in his heart for world domination and Tony’s girl. There’s an original plotline if I ever heard one.

The film bounces around a lot between the first meeting of Killian and Stark in 1999, to the Mandarin’s chilling attacks on the planet, to Tony trying to perfect his latest iron prototype. Eventually, the movie settles into an emotionally fragile Stark being stripped of everything Iron Man we love when his only J.A.R.V.I.S. suit loses all power, and the world presumes him to be dead. Tony has to rediscover what made him the man he is today to survive, get back the woman he loves, and save the world. There are flickers of his wit and sardonic charm here and there, but not for any decent amount of time. His anxieties are taking control of him.

James Rhodes (Don Cheadle) as the Iron Patriot makes a few appearances, but he is, unfortunately, unnecessary to this film. If he were omitted, the movie wouldn’t miss a beat. Jar Jar Binks makes a more effective sidekick.

Ben Kingsley, however, has about the same amount of screen time as Cheadle, but he delivers an awesome performance as the Mandarin in all his glory and infamy. He is the imperfect villain that today’s audiences love, and a perfect foil for Tony Stark.

Aldrich Killian, however, is your stereotypical bad guy, complete with a monologue of his devious plans that gets him in the end. Guy Pearce does a reputable job portraying him considering the script he was given – especially as the socially awkward and deformed Killian from 1999.

Iron Man 3 is not the best of the series. It follows the superhero/villain formula well with a few twists here and there. The ending is your typical big blockbuster ending with lots of explosions and special effects, but it’s still enjoyable to watch.

When Tony Stark's world is torn apart by a formidable terrorist called the Mandarin, he starts an odyssey of rebuilding and retribution.