A young college student named Jay begins a new relationship with a boy named Hugh. One night, after they have sex, Hugh chloroforms Jay and ties her to a wheelchair. Hugh informs Jay that he has passed on a curse to her by having sex with her. He explains that a shape-shifting entity will follow her, and if it catches her, it will kill her. The only way to get out of the curse is to pass it on to someone else. Soon, Jay sees horrific images of people following her wherever she goes and wonders if there is any way to escape the doom that follows. 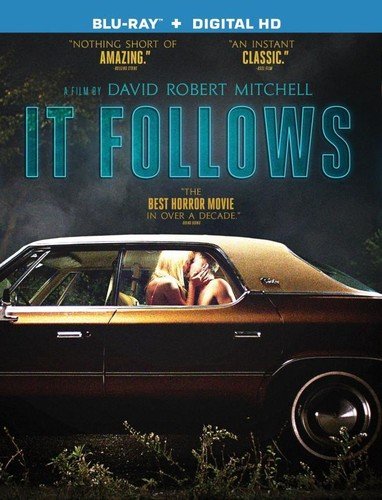 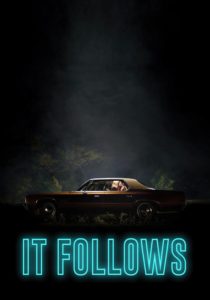 In the opening scene of the film, a young woman (Bailey Spry) runs out of her house and into the middle of the street of her neighborhood. She appears disturbed but tells her father that she is okay. She then gets into her car and drives to a beach. While sitting in the headlights of her car, she calls her father and apologizes for being so difficult. The next morning, her body is shown laying on the same beach horribly mutilated with her leg broken and twisted in an unnatural way.

The film jumps to Jamie “Jay” Height (Maika Monroe) who is a young Oakland University student who has recently begun a new relationship with Hugh (Jake Weary). One night, the couple goes to a movie theater and plays a game where they try to guess who each other are looking at. Hugh points to a young girl in the back of the theater. When Jay indicates that she does not see the girl he is referring to, Hugh becomes visibly rattled and asks to leave suddenly.

A few nights later, Hugh and Jay go on another date and have sex in the back of his car. Afterwards, Hugh unexpectedly chloroforms Jay. Jay awakes to find herself tied to a wheelchair in an abandoned building. Hugh explains to her that she will be pursued by an entity that only they can see. He tells her that it can take the appearance of any person. He warns her that if it catches her, it will kill her and then resume pursuing the previous person to have passed it on, in her case Hugh. Hugh tells her that she can pass on the curse by having sex with someone. Once he is done explaining, they see a mysterious naked woman walking slowly towards them. Hugh takes Jay and leaves, taking her home before disappearing.

The next day, Jay is informed that the police cannot find the naked woman or Hugh, who was living in an empty house and under a false name. The following day at school, Jay sees an old woman (Ingrid Mortimer) in a hospital gown walking towards her. No one else seems to notice the woman. Jay runs home and tells her sister Kelly (Lili Sepe) and her friends, Paul Bolduan (Keir Gilchrist) and Yara Davis (Olivia Luccardi) about what happened. They agree to help Jay and decide to spend the night at Jay and Kelly’s house. Paul does so because he has a not-so-secret crush on Jay.

It could look like someone you know, or it could be a stranger in a crowd. Whatever helps it get close to you. Hugh (Jake Weary)

That night, someone smashes the kitchen window while Paul and Jay are talking. Paul investigates but see no one. However, Jay sees a disheveled, urinating, half-naked woman walking towards her. Jay runs upstairs and locks herself in her bedroom. The others in the house see no one. When the door to the bedroom is opened, a tall, otherworldly looking man walks into the bedroom. Jay panics and flees the house. Her friends catch up to her at a nearby playground. A neighbor boy that Jay had a relationship with previously, Greg Hannigan (Daniel Zovatto), also follows Kelly and her friends to the park. They explain what is happening, and he agrees to help.

The next day Greg helps the group investigate Hugh’s real identity. After they examine the abandon house that Hugh was living in, they discover that Hugh’s real name is Jeff Redmond. They locate Jeff’s real home address where Jeff lives with his mother (Ruby Harris). Jay recognizes that the naked woman at the abandon building resembles Jeff’s mother. Jeff explains to the group that the entity began pursuing him after a one-night stand and that Jay can pass it on simply by having sex with someone else.

Afterwards, Greg drives everyone to his family’s lake house many miles away, believing that it will take time for the entity to walk that distance. Once there, Greg teaches Jay how to shoot a gun. Eventually, the entity arrives and attacks Jay in front of everyone else while they are sitting on the beach. Paul tries to fight the unseen entity by hitting it with a chair, and Jay shoots it in the head. However, the entity recovers and keeps coming towards Jay. Jay attempts to flee by herself in Greg’s car but crashes in a nearby cornfield. She wakes up surrounded by everyone else in a hospital with a broken arm. Jay also finds herself handcuffed to the bed. Jay has sex with Greg in the hospital, since he does not believe that the entity exists.

Several days pass and Greg states that he has not seen anything unusual. One night, Jay sees the entity in the form of Greg walking towards Greg’s house. The entity smashes a window and enters the house. Jay tries to call Greg by telephone, but when he does not answer, she runs into the house to save him. She finds the entity taking the form of Greg’s half-naked mother (Leisa Pulido) knocking on the door of Greg’s bedroom. When Greg answers, the entity attacks. Jay opens the door to see the entity having sex with a twisted and dead Greg. Jay runs away and then leaves in a car. She spends the night outdoors near a beach. Early the next morning, she sees three young men in a boat. Jay undresses herself and begins swimming towards the boat, presumedly to have sex with the men.

When Jay returns home, the group plans to kill the entity by luring it into a swimming pool and dropping electrical devices into the water. Jay waits in the middle of the pool until the entity enters the indoor pool area, this time appearing as Jay’s dead father (Ele Bardha). However, the entity does not enter the water and instead begins throwing the electrical devices that have been pulled free of the wall outlets at Jay. Jay directs Paul to where the entity is, and Paul attempts to shoot it with a pistol. Paul accidentally shoots Yara in the leg, but eventually shoots the entity in the head. The group gets a sheet over the entity and Paul shoots it once more, knocking it into the pool. Once in the water, the entity grabs Jay and pulls her underwater. Paul shoots it again and Jay escapes. Jay looks into the water as the entire pool begins to fill with blood.

That night, Jay and Paul have sex. Afterwards, Paul drives through town and pays a prostitute to have sex with him. The film ends with Jay and Paul walking down the street holding hands as a mysterious figure begins to walk up behind them.