In this comedy spectacular that brought several generations of comedians together in one film, just-released convict “Smiler” Grogan tells a group of motorists just prior to his death from a car accident about $350,000 in hidden money that he stole years before. The motorists then begin to race to a California park to find the money before the others do. Along the way, they have various misadventures and inadvertently loop in additional people who all quest for the money. Unbeknownst to them all, Detective Culpeper monitors them the entire time waiting to swoop in and collect the money for himself. 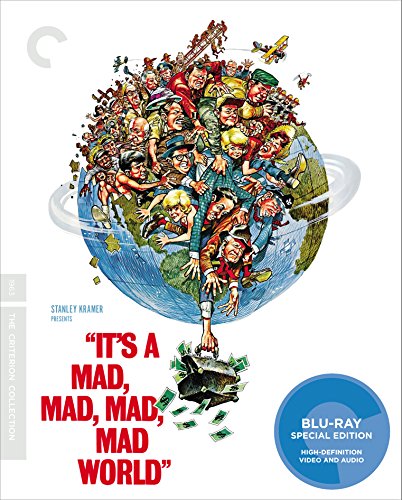 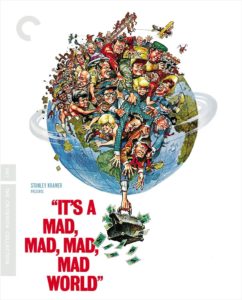 The film begins as just-released convict “Smiler” Grogan (Jimmy Durante) speeds along a windy mountain road at a high rate of speed. Suddenly, he careens off the road and crashes along the hillside. Grogan is thrown from the vehicle. Several motorists stop to provide assistance. Dentist Melville Crump (Sid Caesar) and his Monica (Edie Adams), furniture mover Lennie Pike (Jonathan Winters), hipsters on their way to Vegas Ding Bell (Mickey Rooney) and Benjy Benjamin (Buddy Hackett), and business owner J. Russell Finch (Milton Berle), who has the misfortune of traveling with his wife Emeline (Dorothy Provine) and mother-in-law Mrs. Marcus (Ethel Merman). Grogan informs the group that he buried $350,000 in cash under a big “W” at Santa Rosita State Park. The motorists are skeptical of the information, but they do not inform the first responding officer (Norman Fell) of what Grogan told them.

The group decides to conference about the information on the side of road. They try to come to an agreement to share the money, but they argue about the split. They decide to each race to the money with the understanding that whoever gets their first gets to keep the money. Unbeknownst to them, Captain T.G. Culpeper (Spencer Tracy), a detective with the Santa Rosita Police Department, has been monitoring Grogan for years trying to uncover where he hid the stolen money. Culpeper wants to solve the case and then retire. He suspects that that Grogan may have told the motorists where the money is located so he has them followed by various patrol officers.

The groups take a variety of routes to Santa Rosita. Crump and his wife Monica charter a biplane that puts them in fear for their lives. After they land, they travel to a hardware store to buy a pick and shovel and inadvertently get themselves locked in the store during the lunch hour. They are forced to use dynamite to blow the door and free themselves from the store. Bell and Benjamin follow Crump’s example and charter a modern plane. However, their pilot, wealthy alcoholic Tyler Fitzgerald (Jim Backus), knocks himself unconscious during the flight. Bell and Benjamin are forced to land the plane themselves. They buzz the tower of the airport several times before finally making it to the ground.

Finch’s car is involved in a car accident with Pike’s furniture van. Pike takes a little girl’s bike from the back of his van and rides off to get help. Finch’s group waits with the cars, but they are soon approached by British Army Lieutenant Colonel J. Algernon Hawthorne (Terry-Thomas) who offers to drive them to Santa Rosita for 10% of the money. They pass Pike on the road, who suddenly realizes that he has been betrayed. Pike flags down motorist Otto Meyer (Phil Silvers) and tells him about the hidden money. Meyer abandons Pike on the side of the road as well and heads off to Santa Rosita to get the money for himself. Pike steals a gas station’s tow truck and heads off for the money. Hawthorne and Finch grow tired of Mrs. Marcus and decide to leave her on the side of the road. Emmeline decides to stay with her mother rather than continue with her husband. Eventually, Pike comes along with the tow truck and picks them up. Mrs. Marcus calls her son Sylvester (Dick Shawn) who lives near Santa Rosita to go and get the money.

However, the dim-witted Sylvester believes his mother is in trouble and instead drives to her and away from Santa Rosita. Meanwhile, Meyer experiences his own setbacks and ends up sinking his car into the Kern River. He steals another car and continues to the money. The whole time, Culpeper monitors them all through the various deputies pursuing the motorists. Culpeper grows dissatisfied with his job due to his lack of salary increases and low pension. His wife and his daughter constantly berate him on the phone about their personal issues. Culpeper formulates a plan to acquire the money for himself.

Once near Santa Rosita State Park, two taxi drivers (Peter Falk and Eddie “Rochester” Anderson) become involved in the chase as they pick up some of the motorists without cars. Everyone eventually reaches the park at about the same time. Culpeper goes to the park, but orders all the other police officers to hang back until he gives the word to move in. Emmeline spots the big “W” which is made of four palm trees in the shape of the letter. However, Emmeline wants no part of the money and only tells Culpeper who she encounters strolling in the park. Pike eventually sees the “W” and informs everyone else, who finally agrees to split the money. They dig up the money, and Culpeper finally identifies himself and seizes the money. He suggests that all the motorists turn themselves into the police, and they all leave in the two taxis. Culpeper takes the money and begins driving towards Mexico.

The group figures out what is going on when Meyer notes that Culpeper is not driving back towards the police station. They begin chasing Culpeper in the two cabs. The chase eventually becomes a foot pursuit, and everyone goes into an abandoned building. The police figure out that Culpeper has taken the money and his boss, Chief Aloysius (William Demarest), orders the other officers to move in and arrest the detective.

After the long chase, all eleven men end up on a fire escape that begins to collapse. The suitcase containing the money opens, and the money falls onto the streets below. The large crowd on the ground grabs all the money. A fire truck pulls up and raises its ladder in order to save the men. However, all eleven men jump on the ladder which over stresses the ladder. It begins swinging wildly, throwing the men off in a variety of different directions. Each of the men end up with various injuries.

The film ends with all the participants in the hospital recuperating from their injuries. The motorists criticize Culpeper for his greed and his dereliction of his duty. Culpeper tells them he is likely to get the longest sentence from the judge based on his position and because of that, it will likely be a long time before he will laugh again. Mrs. Marcus enters the hospital room to berate the men and slips on a banana peel causing her to land on her ass. All the men, including Culpeper, begin laughing uncontrollably.