Jaws takes place during a sweltering summer on Amity Island—a small community which makes its money from its beaches. When the sheriff, Martin Brody, discovers the remains of a shark attack victim, he wants to close the beaches to swimmers. Unfortunately for him, this doesn’t sit well with the mayor and several local businessmen. They pressure him not to close them, and he backs down. The shark kills a young boy that weekend. So the mother of the dead boy puts a bounty on the shark, and amateur hunters invade the town to collect that reward. One local named Quint has a lot of experience hunting sharks, and he offers to hunt it down for a nominal fee. That leads him, Brody and a man from the Oceanographic Institute named Matt Hooper to hunt the Great White. The men quickly learn that they are going to need a bigger boat if they are to succeed. 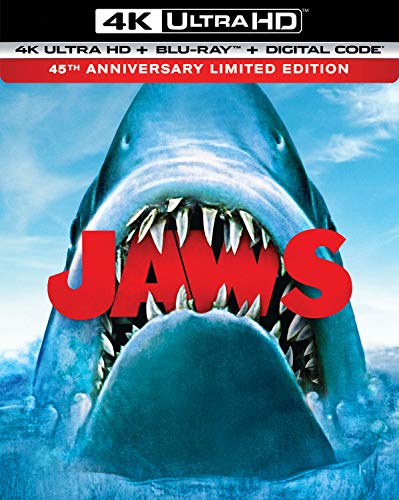 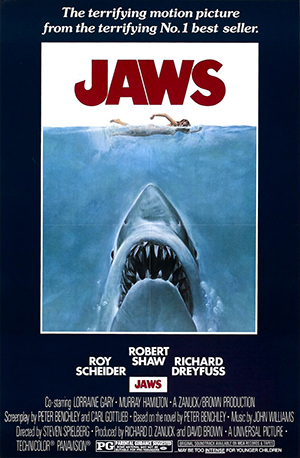 In Jaws, Martin Brody (Roy Scheider) is the new sheriff on Amity Island. He has moved his young family to the island to get away from the problems of the big city. The summer season has not even begun when things go south. Young swimmers fall victim to a ravenous shark. The blood -thirsty predator threatens even Chief Brody’s son.

The Mayor of Amity (Murray Hamilton) places politics above safety. Despite the obvious shark problem, he pressures the chief not to close the beaches for the Fourth of July holiday.

When the problem escalates and can no longer be ignored, the Mayor consents to hiring a gruff fisherman named Quint (Robert Shaw) to capture the rogue shark. Quint, Brody, and a boy wonder shark specialist named Hooper (Richard Dreyfess) set out aboard a vessel named The Orca to fry some fish.

Quint is obviously not playing with a full deck and he seems willing to risk it all to capture this shark. Things aboard the Orca go from bad to worse as the three men try to capture the shark. The boat sustains damage from the shark and begins to sink. As Hooper enters the shark cage in the water, the shark rams it. He barely escapes, and hides under water in his scuba gear. The other two men assume they lost him.

Quint destroys the radio to ensure that they don’t return without the great white prize. Quint becomes another meal for the shark. Left alone on a sinking ship, Chief Brody is able to ram an oxygen tank into the mouth of the beast. He desperately attempts to shoot, and blow up the tank. He finally gets a hit, and blows the shark to smithereens.

Hooper surfaces, and the two kick themselves back to shore.