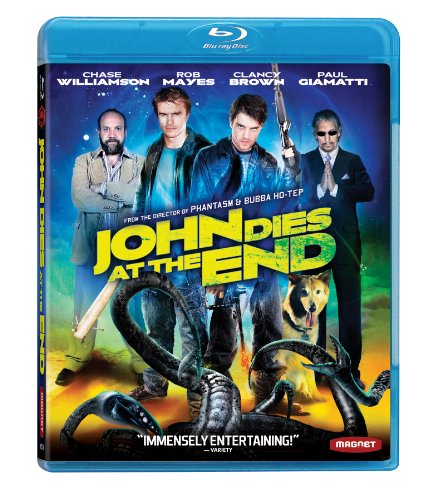 John Dies At The End [Blu-ray]

Magnolia Pictures has announced the release and details for the upcoming Blu-ray release of John Dies at the End. The film is an adaptation of David Wong‘s audacious trans-genre horror novel of the same name. John Dies at the End is written and directed by Don Coscarelli and stars Rob Mayes, Chase Williamson, Paul Giamatti, Clancy Brown, and Doug Jones. The film will be available in stores and online on April 2nd.

In John Dies at the End, it’s all about the Soy Sauce, a drug that promises an out-of-body experience with each hit. Users drift across time and dimensions. But some who come back are no longer human. Suddenly a silent otherworldly invasion is underway, and mankind needs a hero. What it gets instead is John (Mayes) and David (Williamson), a pair of college dropouts who can barely hold down jobs.

The Blu-ray release will include several special features, including: a commentary with Coscarelli, Williamson, Mayes, and producer Brad Baruh; Getting Sauced: The Making of John Dies at the End featurette; Creature Corps: The Effects of Soy Sauce featurette; deleted scenes; casting sessions; Fangoria interview with Giamatti; and theatrical trailers.

Disclaimer: Affiliate links are contained in this post. This means when you click a link, and purchase an item, Movie House Memories will receive an affiliate commission. Advertisers and Affiliate Partnerships do not influence our content. See our Terms of Use about the inclusion of affiliate links on this site for more information.
March 23, 2013
1 minute read
Show More
Back to top button
Close
Close