“Joker” centers around the iconic arch-nemesis and is an original, standalone story not seen before on the big screen. The exploration of Arthur Fleck, a man disregarded by society, is not only a gritty character study, but also a broader cautionary tale. 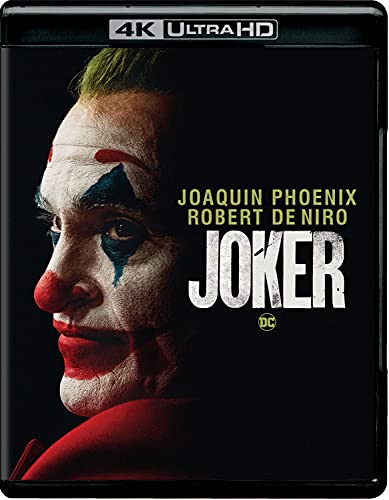 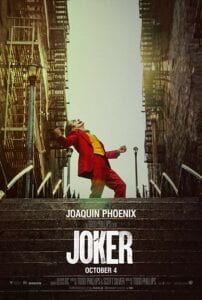 Joker takes place in Gotham City ca 1981. Arthur Fleck is party clown for a company called Ha-Ha’s, and also a stand up comedian. While out on one job for Ha-Ha’s, a group of punk teens steals his sign he uses to advertise a store. Arthur chases after them into an alley, but they turn on him, and smash the sign upside his head before giving him a ruthless beatdown. This attack comes during a time in Gotham’s history where crime, unemployment, and poverty run rampant.

After the attack, Arthur visits a social worker for medication because he suffers from a mental disorder that causes him to laugh at inappropriate times. On his bus ride home from her office, a small child looks on at Arthur as he makes silly faces to amuse the boy. However, his mother isn’t amused. She tells Arthur to leave the boy alone. Arthur laughs hysterically at her in response before handing her a card that explains his mental condition.

When Arthur returns home, we meet his ailing mother, Penny whom he lives with. As the two watch a talk show with host Murray Franklin, Arthur imagines himself on the show. In his little fantasy, Arthur wins over both Murray and the audience with his touching story of taking care of his mother. It’s not a happy life that the two live, and money is tight. Penny, who used to work for Thomas Wayne, writes to him to see if he will help ease their living situation a bit.

Back at Ha-Ha’s, Arthur’s co-worker, Randall, has heard about the little mugging incident, and he gives Arthur a gun for protection. Meanwhile we learn that Arthur has an infatuation with his neighbor, Sophie Dumond. While she’s very polite to him, Arthur is nothing but socially awkward around her.

Arthur even finds himself following her around to the point she even stops by his place to ask if we was doing so. He admits that he was, but Sophie seems unfazed from his honesty. So, he invites her to a comedy show he’s performing at. She agrees, and the show, Arthur starts off laughing uncontrollably before he’s able to settle into his routine. It’s not good. It’s so bad, nobody laughs except for Sophie.

Later, when Arthur is at a children’s hospital to entertain them as a clown, his gun falls out on the floor. Arthur’s boss catches wind of the incident and yells at him for it (as well as losing that sign from the store where he got mugged). Additionally, Randall now claims that he didn’t have anything to do with giving Arthur the gun. He says Arthur bought it himself.

They fire Arthur, but before he leaves, Arthur gives Randall a piece of his mind…what little he has to spare. Arthur’s downward spiral only gets worse when his social worker tells him the city cut off funding to her program, and the facility is shutting down. Now, Arthur doesn’t have anywhere to get his much needed medications.

As Arthur takes a subway ride home in his clown getup, he spots three drunken Wayne Enterprises businessmen harassing a woman. Arthur’s maniacal laughter catches their attention; allowing the woman to flee. The men mock Arthur for his laughter, and start to beat him down. Arthur pulls out his gun and shoots two of them, dead. He then follows the last guy off the train before killing him on the stairs. In a state of shock over his actions, Arthur heads to a bathroom. After a moment of thought, he begins to dance with delight.

As the news of the three murders spreads, some support the killings while others feel it’s an attack on the wealthy. Thomas Wayne, for his part, condemns the violence, and labels anyone who is envious of more successful people as a clowns. This causes many demonstrations against Gotham’s rich as protesters wear clown masks in the unknown killer’s image.

Eventually, Arthur finds one of Penny’s letters to Thomas. She seems to indicate that Thomas is Arthur’s father. To confirm this, he goes to Wayne Manor to talk to Thomas. Out front, he meets a young Bruce Wayne. When he sticks his hands through the gate to make Bruce smile, Alfred stops him, and asks him to leave. Arthur mentions his mother, and although Alfred remembers Penny, he says that she lied to him. Arthur starts to attack Alfred, but runs away instead.

Meanwhile, two police detectives, Burke and Garrity, go to Arthur’s place, and question him over the subway murders. Everyone knows that the suspect wore clown make-up, and the detectives know Arthur lost his job earlier that day. Arthur denies any knowledge in the incident, and the detectives leave.

Soon after, Penny finds herself hospitalized from a stroke. Sophie gives Arthur support as he sits by his mother’s sider. While in the hospital, Arthur watches TV to find Murray’s show playing a clip from his stand-up routine. He’s hurt to see Murray mock him instead of praising his comedic performance.

Next, Arthur tracks Thomas down at a public event where he confronts him with belief that Thomas is his father. Thomas remembers Penny, but says she’s quite delusional. Penny is neither Arthur’s biological mother nor is he in any way Arthur’s father. Arthur laughs in Thomas’s face before Thomas punches Arthur in his. He then has Arthur tossed out of the building.

Later, when Arthur receives an unexpected phone call from a rep at Murray’s show, he accepts their offer to appear as their guest.

However, Arthur still wants concrete proof that Thomas is his father. He goes to Arkham Asylum to speak to a clerk named Carl. While he has a file on Penny, he can’t give Arthur the info he wants. So Arthur steals it, and runs off to read it. He finds that Penny actually adopted Arthur after he was abandoned, and she later abuse him. Part of the file mentions a head injury Arthur received at one point which is the most likely source of his laughing condition.

When Arthur returns to the hospital, he tells Penny that he thought his life was a tragedy, but he now sees it as a fucking comedy. He then smothers Penny to death. Arthur next returns home where he breaks into Sophie’s apartment. His presence terrifies her, and she asks him to leave for the sake of her daughter. During this incident, we learn that all their previous meetings were delusional figments of Arthur’s broke imagination.

Now, it’s time for Arthur to get ready for his appearance on Murray’s show. Randall and another former co-worker named Gary visits him at his apartment. They are there to offer their condolences over Penny’s death. However, when they mention Burke and Garrity questioned them about the subway murders, Arthur stabs Randall to death. He lets Gary go unharmed since he was the only one at Ha-Ha’s that was ever nice to him. Arthur then dyes his hair green before putting on full clown make-up. He finishes his look off with a burgundy suit.

Burke and Garrity arrive to find Arthur dancing in the street. When they try to arrest him, Arthur runs off. They chase him to a subway train where they find tons of other Gotham citizens dressed like clowns too. In their pursuit, Burke accidentally shoots one of these clowns, dead. The other clowns retaliate, and beat the officers down. Arthur escapes to head to the TV station for his big performance.

Once there, Arthur meets Murray and his agent Gene. As he’s about to go on, Arthur asks Murray to introduce him as The Joker, since that’s how Murray referred to him when playing his clip. When Arthur goes out for his segment, he tells an awkward joke before admitting to the subway murders. Everyone there slowly comes to realize that Arthur is serious.

Arthur then argues that the audience only cares for the victims because Thomas Wayne spoke for them. Anyone else like Arthur would just be labeled a clown and ignored. As the anger builds for everyone there, Murray scolds Arthur for his actions. Arthur snaps, and shoots Murray in the head in front of everyone. As the audience runs away screaming, the news of Murray’s murder immediately hits the airwaves.

Chaos ensues throughout the city. Citizens, dressed as clowns, riot after hearing what Arthur did. The Waynes are leaving a movie theater when they find chaos in the streets. Thomas takes Martha and Bruce into a side alley, but one of the clowns follows them. He tells Thomas he is getting what he deserves before shooting Thomas and Martha dead in front of Bruce.

Meanwhile, the police have since arrested Arthur. However, clowns in an ambulance run into their car to free him. The rioters then cheer Arthur on as he takes in their admiration. Finally, Arthur has the recognition he’s long desired.

Some time later, we see Arthur locked up in Arkham. He meets his new social worker, and says he wants to tell her a joke, but she wouldn’t get it. A few minutes later, we see some orderlies chase after Arthur with his footprints leaving a trail of blood behind him.