Joyeux Noel takes place during World War I. While it’s the bloodiest war ever at that time, on Christmas Eve, numerous sections from the French, Scottish and German sides of the Western Front call an informal (and unauthorized) truce. Various front-line soldiers on both sides meet each other in No Man’s Land. They share a brief, peaceful night even though their superiors would not approve it if they found out. 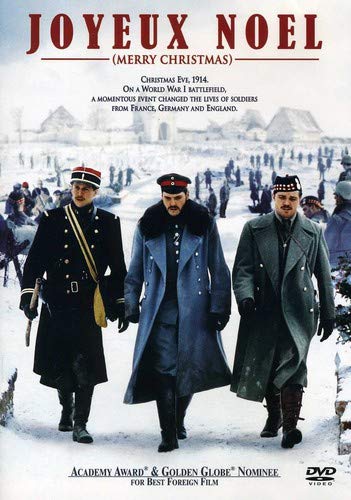 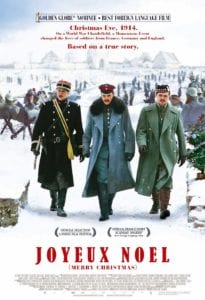 Joyeux Noel starts with Jonathan and William, two young brothers from Scotland, eagerly enlisting in the Great War. Their Priest, follows them and becomes a Chaplain in the army. Meanwhile, in Germany, opera star, Sprink is about to take the stage with his woman, Anna. But the show is stopped by German officials who announce that the government is calling up reserves to fight in the war.

In occupied France, French Officer Audebert leads a charge, along with Scottish forces, through no man’s land to take a German trench. The advance is repelled, and William is shot and dies. Later, Audebert is paid a visit by a French General, his father. Audebert asks for news of his pregnant wife. But no news has escaped the occupied zone in France.

In Germany, Anna gets permission to perform for the Kronprinz near the front on Christmas Eve. Sprink is permitted to join her. The two of them put a show on for the prince and sneak to the front to sing for the German soldiers. As they sing, the Scots hear the music and join in with a bagpipe rendition of Christmas carols.

When Sprink hears this, he leaves the safety of the trenches and ventures into no man’s land, singing as a token of friendship to his rival troops. Father Palmer leaves his trench with his bagpipe, and shortly thereafter Scottish and German troops are fraternizing in no man’s land.

Officers from each army meet to coordinate the ceasefire. They allow the troops to spend the evening together and exchange pictures and food themselves. Father Palmer holds a Mass for the soldiers, most of whom attend and are moved. As the Mass concludes, however, shells light up the distant night sky, and everyone reluctantly returns to his trench, everyone except Jonathan, who spends the night huddled next to William’s frozen corpse.

The next morning, the troops awake to the sound of Jonathan scratching at the ground to bury his brother. The officers come out and decide to extend the truce so that the dead can be buried. The truce continues all day as the various armies enjoy the day and play soccer with each other, eventually returning to their trenches with a vow to carry the war on shortly.

Later, the German officer comes to the French trench and warns them of an impending shelling on their position. The French and Scottish take shelter in the German trench, then switch positions while during the counter attack on the German trench. Soon thereafter, a man in a German uniform sprints through no man’s land, and a Scottish honcho is furious when the Scots won’t shoot him.

Finally, Jonathan shoots him remorselessly. It so happens the man in the German uniform was Audebert’s assistant, who snuck out to see his mother in German occupied France. Audebert learns his wife has given birth to a son she named Henri.

News of the ceasefire gets out, and each unit is punished in its own way. The French unit is disbanded. The Scots are shamed. And the Germans are sent to the eastern front to fight the Russians.