Based on Disneyland’s theme park ride where a small riverboat takes a group of travelers through a jungle filled with dangerous animals and reptiles but with a supernatural element. Frank Wolff is a river boat captain on the Amazon River. He is hired by a British scientist and her brother to travel into the jungle to find the Tree of the Moon, whose flowers allegedly can cure illness, injuries, and lift curses. Along the way, they encounter and battle a submarine, rogue Germans, and undead conquistadors that have a history with Frank. 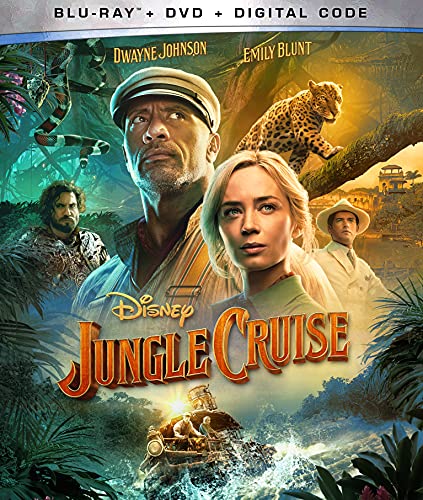 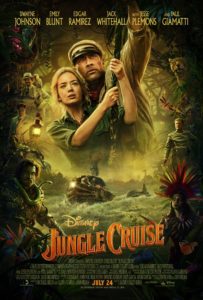 In 1916 London, MacGregor Houghton (Jack Whitehall) gives a presentation to the Royal Society concerning the Tears of the Moon research that his sister, Dr. Lily Houghton (Emily Blunt), has secretly written. The Tears of the Moon, a mythical tree whose flowers are rumored to have the power to cure illness, injuries, and lift curses, has long been rumored to be hidden deep with the South American jungles. Lily’s research claims that the Tree’s flowers could revolutionize medicine and aid the British war effort during World War I. However, the presentation is merely a distraction so that Lily can break into the Society and steal a recently acquired arrowhead that is allegedly the key to finding the Tree. The Society disregards the research believing that women are inferior scientists. However, Lily successfully steals the arrowhead, narrowly beating out a mysterious German prince by the name of Joachim (Jesse Plemons) who was also seeking the arrowhead. Soon after, Lily and MacGregor begin their journey to South America, although Lily’s brother does so apprehensively.

Meanwhile, in Brazil, Frank Wolff (Dwayne “The Rock” Johnson) is a steamboat captain who offers cruises to tourists filled with faked dangers and dad jokes. Frank is down on his luck and can’t keep up with his debts. His boat’s engine is seized by Frank’s boating competitor and local businessman, Nilo Nemolato (Paul Giamatti). Frank concocts a plan to get his engine back, but he is caught trying to steal the key to the lock by Lily who mistakes Frank for Nilo. Frank initially declines her request to take her up the river, believing that the trip would be too dangerous for Lily. However, Frank reconsiders when he sees the arrowhead. Frank convinces her to hire him for the trip and steals back his repossessed boat engine. Just as Frank, Lily, and MacGregor begin to depart, Prince Joachim arrives in his German submarine and opens fire on them. Frank escapes and gets the jump on the U-boat.

While traveling up the river, Lily enters Frank’s cabin and notices photos and sketches of several modern inventions. She also finds several maps, drawings, and research on the Tears of the Moon. Lily realizes that Frank has his own interest in the Tree and is not merely a mercenary for hire. Frank admits to previously seeking the Tree but states that he gave up his search years before. Suddenly, the trio are captured by a cannibal tribe. Frank attempts to negotiate their release, and the cannibals agree if Lily will leave the arrowhead. However, Lily and MacGregor discover that the tribe is one of Frank’s fake danger tribes for his tourist trips. The Puka Michuna tribe is led by Trader Sam (Veronica Falcón) who translates the arrowhead and informs Lily that it specifies the Tree’s location and that the tree only blooms under the blood moon. Lily is angered at the constant deceit by Frank and makes plans to set out on her own.

The cursed conquistadors attack the tribe before Lily has a chance to leave on her own. Frank tries to stop them, but he is fatally stabbed and falls lifeless into the jungle. Lily and MacGregor escape into the jungle too far for the Aguirre and his men to follow. The next day, Lily and MacGregor are shocked to find a very much alive Frank near the river. Frank reveals that he is the fifth conquistador and that he was the one who imprisoned Aguirre and his men in the pit that Joachim found them in. Frank reveals that Aguirre’s intentions were initially noble, wishing to find a flower to heal is sick daughter. However, Frank states that when they attacked the tribe centuries before, he fought along side the tribe against Aguirre. Frank then spent centuries looking for the Tree before giving up and settling down with his boat.

Frank takes Lily and leaves MacGregor behind with Trader Sam. Lily and Frank continue to a waterfall where they discover and raise a submerged temple. Unfortunately, MacGregor is captured by Joachim and forced to tell the German prince where his sister went. Once the temple is revealed, Joachim is already present. Joachim forces Lily and Frank to activate the Tree by threatening MacGregor’s life. Lily discovers that the arrowhead is actually a heart-shaped locket containing a gemstone. Frank and Lily place the gemstone and locket into the trunk and the dormant tree blooms under the blood moon. A fight ensues as Frank, Lily, Joachim, the Germans, and the conquistadors all battle to recover flowers. As the fight ensues, Lily recovers one flower. The Germans are drowned, Joachim is crushed by a portion of the tree, and Frank crashes his boat into the river entrance, blocking the river from the Tree. The jungle tries to pull Frank and the conquistadors back to the river but can’t. All five of them turn to stone. Lily realizes that she loves Frank and places the flower onto his lips, sacrificing her dreams of using the flower to advance medicine. The flower unfreezes Frank, lifts his curse, and restores his mortality. Frank, who had previously wanted to die, decides he has a new reason to live, Lily. The moon casts one last beam and a single flower blooms. Lily collects the flower which allows her to continue her research.

Months later, MacGregor speaks again at the Royal Society, this time to reject their invitation to Lily to join. Meanwhile, Lily shows Frank the wonders of the modern world and teaches him to drive an automobile.