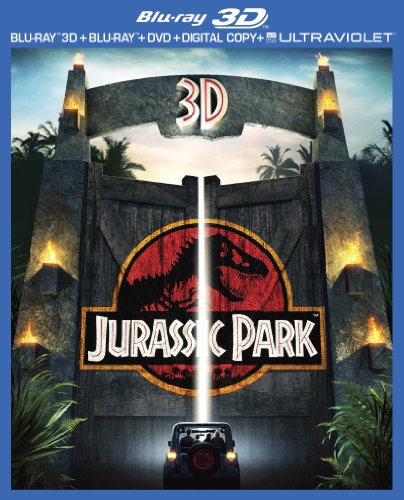 Jurassic Park 3D finds the beloved epic remastered and presented in state-of-the-art 3D.  The 3D reissue allows director Steven Spielberg to introduce the three-time Academy Award-winning blockbuster to a new generation of moviegoers while allowing longtime fans to experience the world he envisioned in a way that was unimaginable during the film’s original release.  Starring Sam Neill, Laura Dern, Jeff Goldblum, Samuel L. Jackson, and Richard Attenborough, the film is based on the novel by Michael Crichton and is produced by Kathleen Kennedy and Gerald R. Molen.

In Jurassic Park, huge advancements in scientific technology have been able to create an island full of living dinosaurs.  John Hammond (Attenborough) has invited four individuals, plus his two grandchildren to join him at Jurassic Park.  But will everything go to plan?  Especially when one of the parks own workers attempt to steal the dinosaurs embryos, and have to shut down all the electricity in the process.  It’s now a race for survival with everyone located all over the island.

Jurassic Park was originally released in June of 1993 and has grossed over $357 million at the box office to date.  The film won three Academy Awards and was the highest grossing film of 1993.

Disclaimer: Affiliate links are contained in this post. This means when you click a link, and purchase an item, Movie House Memories will receive an affiliate commission. Advertisers and Affiliate Partnerships do not influence our content. See our Terms of Use about the inclusion of affiliate links on this site for more information.
January 27, 2013
1 minute read
Show More
Back to top button
Close
Close